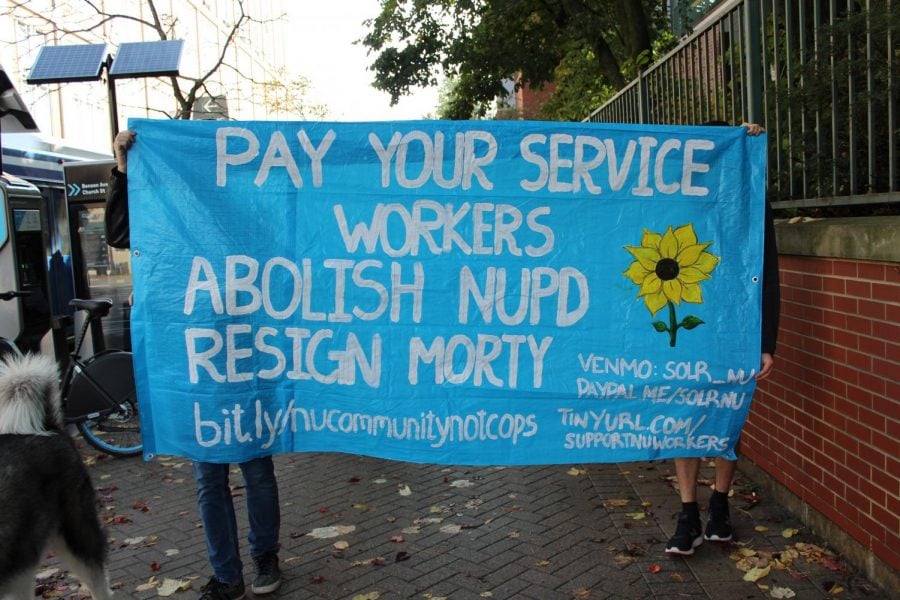 On Thursday, Student Organizing for Labor Rights paired with NU Community Not Cops, emphasizing that abolition and mutual aid are linked.

On its 11th day of actions demanding the abolition of University Police, NU Community Not Cops joined Students Organizing for Labor Rights to call on Thursday for the University to reinvest its policing funds in community care.

After gathering in front of the Davis Street CTA station, about 75 students marched to the intersection of Foster Street and Sheridan Road, where they staged a sit-in in front of the Donald P. Jacobs Center. Students danced to Wobble by V.I.C, the Cha Cha Slide and the Cupid Shuffle.

“We’re here today to stand in solidarity with NU Community Not Cops to abolish NUPD and policing globally and to also support the dining workers who have been abandoned by the University at the start of the pandemic,” a speaker from SOLR said to the crowd.

As of last month, SOLR had raised over $80,000 in mutual aid funds for dining workers affected by mass layoffs and a lack of health and safety precautions since the start of the pandemic. Following Fall Quarter dining hall closures, layoffs only increased.

Now, as calls to abolish UP are gaining momentum, SOLR has paired with NUCNC to demonstrate how NU could reinvest the funds divested from policing toward the community — and in this instance, toward paying its dining workers.

A Weinberg freshman and SOLR member, who preferred to remain anonymous, explained that the missions of NUCNC and SOLR are intrinsically linked. As the action stood to demonstrate how the University could better care for its community, it also functioned as an opportunity for SOLR to demonstrate solidarity for the abolition movement.

“Police have always been used to stop union strikes or intimidate labor organizers,” she said. “So we very much know that policing is linked to labor exploitation and exploitation of Black and Brown workers.”

As the protesters marched through Evanston, the same officer rode on a motorcycle, circling in front of the group. As students booed a passerby Evanston resident for taking photographs of the group, the officer engaged with him. “Hey sir,” he said to the resident. “You want them locked up, let me know.”

NUCNC and SOLR emphasized their ties to abolitionist commitments during the action by collecting donations of winter gear for the free distribution table in Rogers Park run by Abolitionists at NU. As the march gathered at the intersection, one student emphasized how the donating, fundraising and organizing efforts are intertwined.

“Mutual aid and the abolition of police go hand in hand,” they said. “Mutual aid has always been rooted in resistance to oppressive systems and (their) violences. It’s a tool we can use on the path to abolition.”