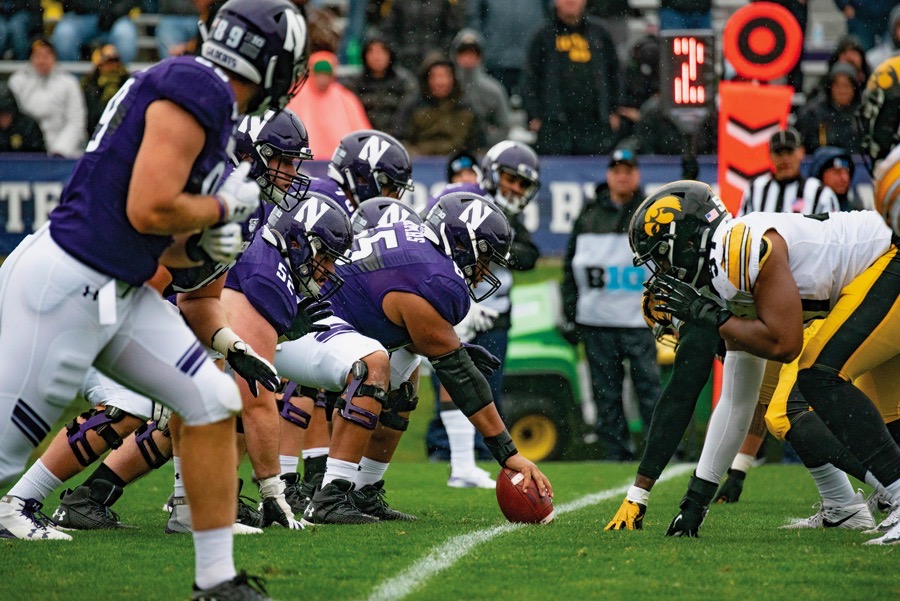 Northwestern’s offensive line prepares to block the opposing defensive lineman. With Rashawn Slater opting out of the season, the Cats will turn to freshman Peter Skoronski to replace him.

This offseason, potential first-round pick Rashawn Slater left an enormous hole in the Northwestern offensive line when he chose to opt out of the 2020 season to prepare for the NFL Draft.

So when Northwestern’s first depth chart of the year came out on Monday, all eyes looked at the name next to left tackle. The name wasn’t experienced senior tackle Gunnar Vogel. It wasn’t senior guard Nik Urban. Instead the depth chart read: Peter Skoronski, 6-4, 294, Fy.

“(Offensive line coach Kurt Anderson) will throw out the guys that he feels are the best prepared,” senior left guard Nik Urban said. “He always says the expectation is on the position, so the expectation of a Northwestern starting left tackle is to be the best left tackle in the Big Ten, which is what Rashawn was… I think Skoronski is doing great.”

Three years ago, Slater, then a freshman, took the field in Northwestern’s season-opening game against Nevada for the first time in his college career.

The Wildcats trusted him as their starting right tackle to protect Clayton Thorson and he delivered. He started 37 games over three years, spending two years at right tackle before sliding to the left in 2019, and grew into one of the premier offensive tackles in the Big Ten.

Replacing the future pro will be difficult for Anderson and NU. Left tackle is the most important line position on the field for a right-handed quarterback, because he protects the quarterback’s blindside.

But sometimes, history has a way of repeating itself.

The coaching staff are once again putting their faith in a true freshman to step up — but even Slater wasn’t expected to play left tackle. He also didn’t have the lofty expectations that Skoronski’s 4-star rating brings to the table this year.

The Park Ridge, Illinois native came to NU as the fourth-highest rated recruit in school history and the best since defensive end Ifeadi Odenigbo in 2012. Skoronski is one of two freshmen starters on either side of the ball. Redshirt freshman Brandon Joseph is getting his first career start at safety with senior Travis Whillock opting out.

Coach Pat Fitzgerald said he was happy with the production of all of the young offensive linemen at camp, specifically highlighting redshirt freshmen Dom D’Antonio and Zachary Franks, sophomores Payne He’Bert and Charlie Schmidt and true freshman Josh Priebe.

But when it came to choosing a starter for Saturday, Fitzgerald said it came down to consistency — and Skoronski fit the bill.

“That group is young and a talented group and Peter did the best job from a consistency standpoint,” Fitzgerald said. “That would be the reason why he gets the opportunity to go out there and start… he’s earned it by the consistency in which he’s going about executing the scheme, fundamentally (and) technically.”

Fitzgerald said the position battle isn’t over just because Skoronski is the Week 1 starter. He also acknowledged the first game might be a steep learning curve for the true freshman as he adjusts to the talent level of Maryland and the speed of the game.

But Skoronski will have plenty of experience around him to help guide him through this game and the rest of the season.

The other four o-line starters — Urban, juniors Sam Gerak and Ethan Wiederkehr and senior Gunnar Vogel — all saw time as starters last season. Urban remembers the nerves of his first college start against Akron in 2018, but former captain Jared Thomas walked up to him at the time and told him, “It’s just football.”

During camp recently, Skoronski pulled Urban aside and asked him for advice about what to look for in the first game. Urban told him the game is definitely faster than practice, but added to have faith.

“You’re one heck of a player so you should be confident in everything; in your talent and what the coaches have prepared us for and just go out and play,” Urban said to Skoronski. “You know, you find out it’s football, you find out football is football, and it’s a blast when you’re out there.”

As a whole unit, Urban said the line has progressed more, focusing on the minute details during individual and technique drills and advancing what they learned last season.

Despite the loss of Slater and Thomas, who graduated in 2019, expectations are high for a fairly experienced offensive life. And, if Northwestern football hopes for success in the future, they have to hope that, like the last time with Slater, history will continue to repeat itself with Skoronski.

“He’s an incredible player,” Urban said. “To come in as a freshman and play at the level he’s playing at is huge. It’s fun to see for this year and, of course, the future of this team.”