Borrok: Protests are essential to the well-being of Northwestern 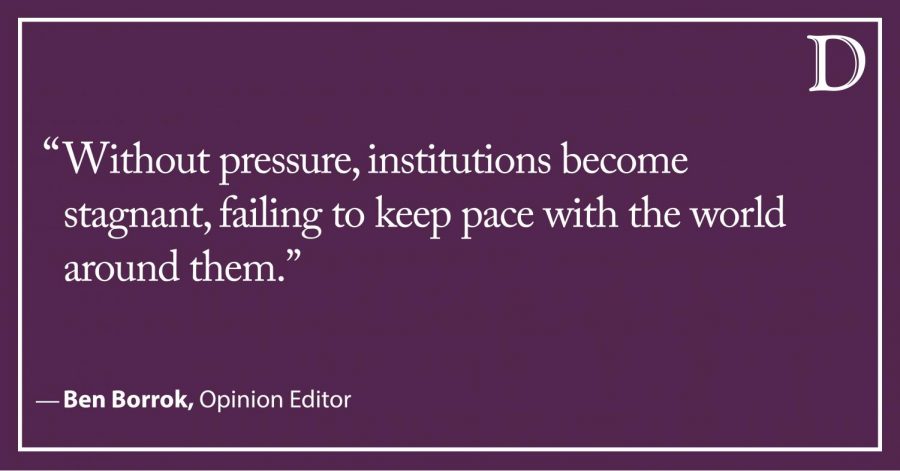 Prior to my on-campus arrival last year, the University sent me a welcome package, which included information on move-in, Wildcat Welcome and Evanston. The package also contained an orientation issue of The Daily Northwestern, chock full of advice and wisdom about student life on campus. Right near the centerfold, in big purple letters was an article titled, “PROTEST AT NU.”

At my prior institution, student life felt disconnected from the world as a whole, like we were living in a bubble that was frozen in time. Despite my best efforts to seek out like-minded individuals and organizations, there was a culture of apathy towards social issues and student justice campaigns. I transferred in hopes of bearing witness to activism and passion and that article suggested Northwestern would allow me to realize this vision.

Northwestern has a long history of protests, from the Bursar’s Takeover of 1968, Vietnam War demonstrations, to the varied protest organizations on campus that tackle tough questions on everything from mental health funding to gun control. Students have always been on the frontlines to hold the school accountable and remain progressive. Without students protests, integration of school buildings, improved financial aid for all students, and an expanded intersectional curriculum would not have been possible. Protest is essential — no, central — to the well-being of the University. Without pressure, institutions become stagnant, failing to keep pace with the world around them.

Universities serve as a first introduction to the real world. You may disagree, claiming that colleges shelter them from reality, but many students have never lived or interacted with others from different socioeconomic backgrounds. It is culture shock that opens the eyes of many, revealing perspectives affected by systemic oppression and privilege. How is it surprising, then, that students are inspired to address these issues?

The reaction to recent protests has been, frankly, embarrassing. For example, the response from Morton Schapiro calling students involved “an abomination” to the University. Perhaps he was caught in the heat of the moment, but after a summer of broken promises and further opaqueness from the administration, I find his message to be wildly hypocritical and regretful. Schapiro’s administration regularly promotes and touts the protests of the ’60s and ’70s around campus. A commemoration of the Bursar’s Takeover took place not more than 2 years ago, further muddying his intentions. How can you be surprised that students continue to engage in protest, especially since you highlight protests of the past on a regular basis? Is it nothing more than an attempt to reign in more applicants?

Protests will always have detractors, as evidenced by my inbox in the past week. Schapiro’s email painted him as a contrarian, cementing his status as a villain in this era of campus history. These protests against the Northwestern University Police Department are not random — there are a variety of well-known reasons that protests have sprung up all over the country this past summer. The aggression shown against protestors at last year’s Jeff Sessions event, along with questions regarding a need for a militarized presence on a college campus, have given protestors reasonable ground to engage in activism.

The protests won’t stop because of an email, especially an email so callously written in an attempt to divide the student body. It didn’t work in 1968 and it sure as hell won’t work now. If the May 4th Agreement that revolutionized the Black experience is any indicator, then the next breakthrough will only serve to improve the University for years to come.

All of this comes at a time where students are experiencing more pressure than ever before. The pandemic has sent many reeling, with campus mostly closed and many struggling to adjust to these unprecedented conditions.

No one marches, organizes and chants to improve something they hate. The protests organized by NU Community Not Cops are out of love for the community they have found here and a duty to protect the most vulnerable. As students here, we are taught to be there for each other, as our predecessors were in their time in Evanston. Protests inspired me to apply to Northwestern, and they continue to make me proud of my fellow students.

Ben Borrok is a School of Communication junior. He can be contacted at [email protected] If you would like to respond publicly to this op-ed, send a Letter to the Editor to [email protected] The views expressed in this piece do not necessarily reflect the views of all staff members of The Daily Northwestern.