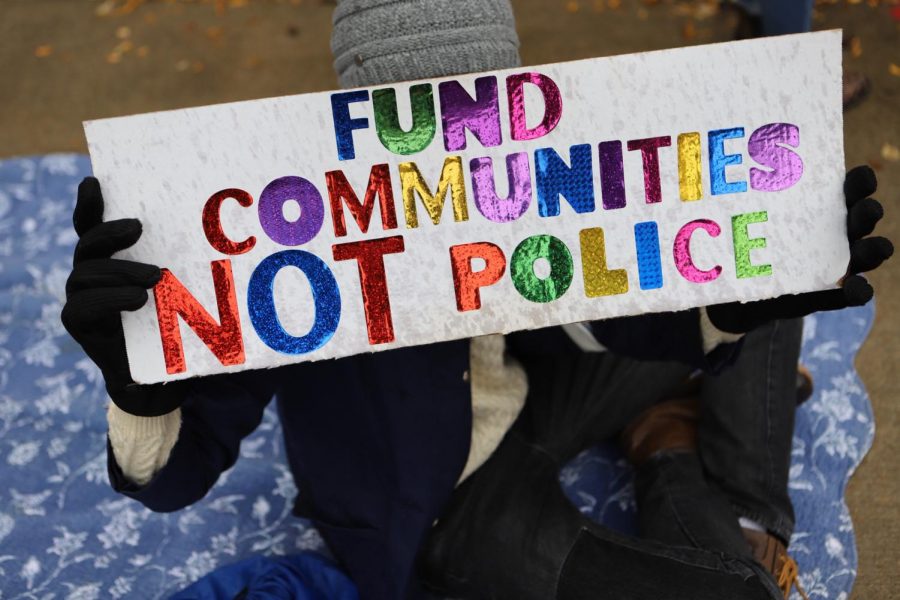 A sign from a previous NU Community Not Cops demonstration, reading “Fund Communities Not Police.” Students reimagined justice in a Wednesday discussion led by FMO and NUCNC.

After a week of abolitionist organizing on campus, University President Morton Schapiro’s email condemning student protests and the hashtag #ResignMorty trending on social media, Schapiro declared in a virtual dialogue Tuesday he “(doesn’t) walk back a single word.”

“It’s disgusting, it’s disgraceful,” Schapiro said about student demonstrations outside his house. “I absolutely stand by exactly what I said.”

Initially intended to be a Zoom discussion with limited spots, ASG worked to change the format to a virtual Q&A-style webinar, where students could submit questions to the moderators in real time.

Community Dialogues started in the 2015-16 academic year in response to student activist demands for more open communication with the administration. While dialogues were initially held monthly, the administration later moved them to a quarterly basis. In his introduction, Rodriguez acknowledged the work of what he said were primarily Black students responsible for this tradition.

Zuniga emphasized the goal of the dialogue in holding the administration accountable for caring for its most vulnerable students.

“We’ve put in a lot of time and effort to make sure that we are lifting up the voices of marginalized students, particularly Black and Brown students, on this campus,” Zuniga said. “And today, hopefully, will be an opportunity to do so.”

Schapiro stands by contested email, does not comment on faculty response

When asked about his heavily-criticized Oct. 19 email condemning student protesters, Schapiro stood by his response.

In the email, Schapiro wrote he was “disgusted” by those who chose to “disgrace” the University, saying the protesters had lost their “sense of humanity.” NU Community Not Cops condemned Schapiro in a news release, which was read at a protest that night, for his use of “racist, coded language” and called for his resignation. The hashtag #ResignMorty trended on Twitter in Illinois by late that evening.

In response to the email, the African American Studies department sent Schapiro a reply, condemning his “inability to imagine that injustice is something that is bigger than (his) own injured pride and hurt feelings.”

“I was sorry to read it,” Schapiro said. “I actually think it mischaracterizes what I’ve done as a president and who I am as a person.”

Schapiro continued, denying the African American Studies department’s claims to implicit racism in his words, citing a diversity and inclusion training he recently attended and claiming “they didn’t read (my email) all that carefully.”

In the event’s chat function, students asked Schapiro to “take accountability” and called for him to resign.

In response to summer abolitionist momentum within the Black Lives Matter movement, students released a list of demands to the University on June 3, calling for the administration to “disarm, defund and disband” UP and allocate funds to resources that support Black students. The petition has since garnered over 8,000 signatures.

Students led by NU Community Not Cops have organized daily since Oct. 12, demanding the University answer their demands. Since then, Schapiro has emphasized that UP will not be abolished, a commitment he repeated at Tuesday’s dialogue.

“We can always do training and always do a better job. That doesn’t mean you disband the police department,” Schapiro said. “We’re going to improve it, we’re not going to disband it.”

Julie Payne-Kirchmeier, vice president for Student Affairs, added some UP reforms have already been put in place, including no longer having police perform wellness checks in mental health emergencies.

“If we abolish the police, then someone is going to have to maintain the law and order aspects,” Johnson said.

Students have waited 140 days for Northwestern to release the budget for UP. Though administration said they would be open to releasing it months ago, they have yet to follow through.

In a July 24 meeting with student activists, Provost Kathleen Hagerty said the University would have “no problem” disclosing the UP budget.

When Rodriguez asked administrators during Tuesday’s dialogue why they have yet to release it, Johnson said the administration is “not hiding the budget.” He added the University hired outside consultants to conduct a budgetary review. But after a summer of empty promises, Rodriguez, Zuniga and students in the chat were clear — they wanted a date for when the budget would be available. In response, Johnson committed to sharing the information during the “middle or end of November.”

In the months since NU students published demands for the University to abolish UP, the administration has been criticized for their limited response and lack of communication with student organizers.

When asked if the administration would meet with NU Community Not Cops, Johnson said he would be “happy to engage with them.” Payne-Kirchmeier said she would facilitate that.

“Let’s get it set up,” Payne-Kirchmeier said.

With many questions left unanswered, Schapiro offered recurring meetings with students to continue conversations, as many as once per week.

“You want to do another one next week, week after? I’m in,” Schapiro said. “I’m happy to do as many of these as you want.”

Zuniga said ASG is prepared to start working on additional sessions for next week, and he hopes administrators can answer more student questions. It was “a little disappointing,” Zuniga said, that Schapiro and Johnson lacked answers to questions when they have so many resources available to them.

“We want to be speaking with students and ensuring that Northwestern is held accountable for the systems that they are creating,” Zuniga said. “That means listening to (students) and campus leaders.