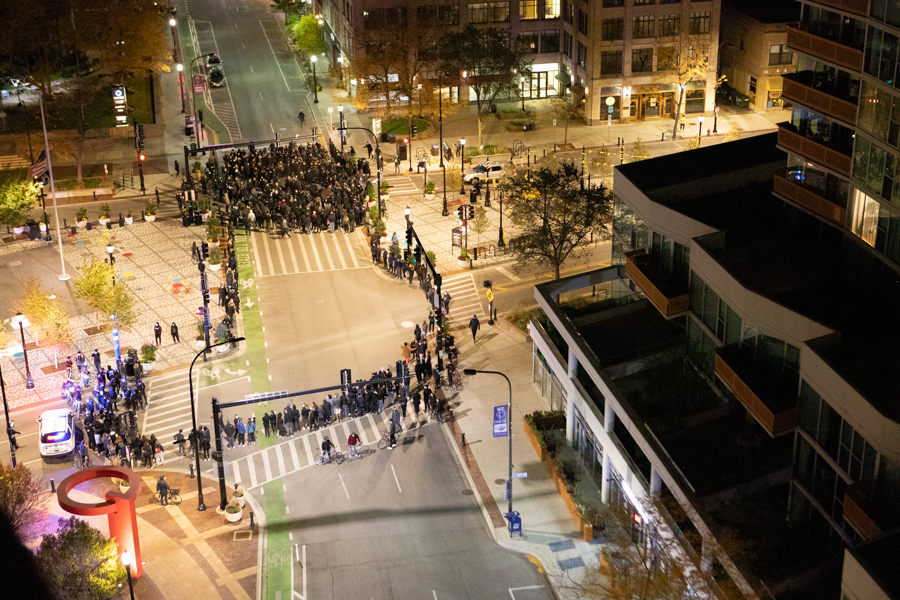 In a Monday afternoon email, University President Morton Schapiro wrote that while Northwestern has intentions to improve University Police, it has “absolutely no intention” to abolish it.

Schapiro’s statement comes after a week of ongoing protests led by abolitionist student group NU Community Not Cops, which held a large-scale protest Saturday that ended in front of Schapiro’s house. The group has demanded the University disarm, defund and disband UP and redirect the funds to institutions that serve Black students’ wellbeing.

The president strongly condemned the protests of students and community members, saying what began as peaceful demonstrations had turned disruptive. Schapiro cited property defacement, city disruptions, road blockages and other violations of “laws and University standards.” He added that some instigators appeared to not be Northwestern students, but rather outside activists.

“I condemn, in the strongest possible terms, the overstepping of the protesters,” Schapiro wrote. “They have no right to menace members of our academic and surrounding communities.”

Schapiro also referenced protesters who showed up outside of his house at least twice in the past week. On Saturday, demonstrators burned the “We’re N This Together” banner that previously hung on The Arch and left it in front of the president’s house near the officers who guarded it.

Schapiro said the explicit chants calling him a “pig” had come close to anti-Semitism. The term is a slang word generally used in reference to police officers.

The email also denied that protesters were only trying to get administrators’ attention, citing numerous community discussions held virtually over the past few months with senior officials like the Provost and Deans. Schapiro also mentioned the previously scheduled dialogue to be held Tuesday evening.

However, many students have said their reason for protesting stems from a lack of communication on specific issues, such as addressing anti-Blackness on campus with action items or releasing UP’s budget.

Schapiro added that the weekend’s actions indicated an intent by organizers to escalate matters and provoke UP into retaliation. When demonstrators arrived at his home Saturday night, they were met by at least three UP officers guarding the front entrance and others stationed around the block. Several Evanston Police Department officers also stood at the nearby intersection in riot gear, some equipped with batons and shields.

Any members of the NU community found to violate rules and laws, Schapiro said, will be held accountable for their actions. While the University supports “firmly supports vigorous debate and the free expression of ideas” and protects the right to protest, “we do not condone breaking the law.”

Some students were issued citations by UP and EPD for protesting last November after former Attorney General Jeff Sessions came to campus, as NU does not have a student protest amnesty policy in place.

“If you haven’t yet gotten my point, I am disgusted by those who chose to disgrace this University in such a fashion,” Schapiro wrote. “To those protesters and their supporters who justify such actions, I ask you to take a long hard look in the mirror and realize that this isn’t actually ‘speaking truth to power’ or furthering your cause,” Schapiro wrote. “It is an abomination and you should be ashamed of yourselves.”

— Administrators commit to transparency and cultural change, but not to divesting from Northwestern police