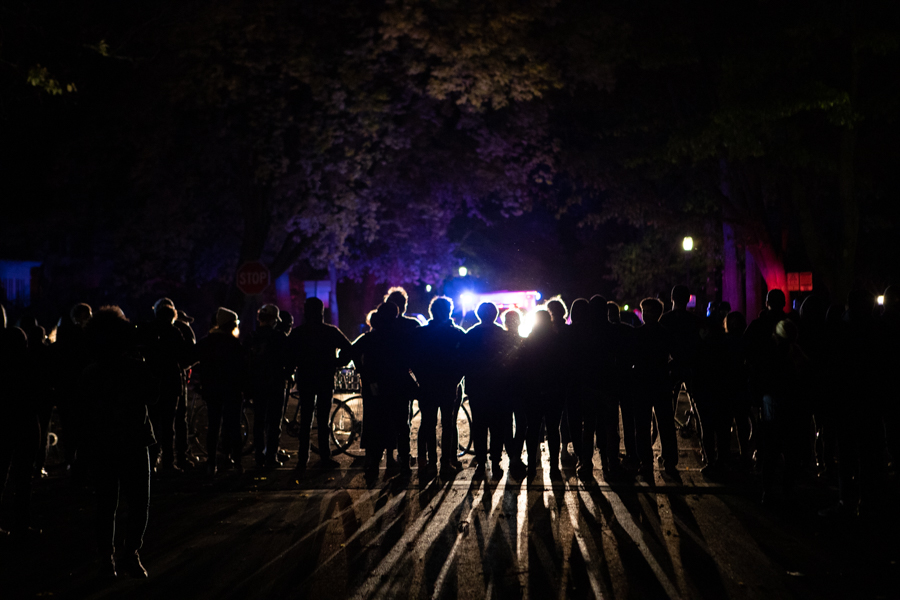 For over a month, a mask-shaped sign reading “We’re N This Together” hung from the Weber Arch. It was meant to symbolize a unified start to Northwestern’s academic year but was often mocked by students instead.

By 11:51 p.m. Saturday night the sign was on the ground, by 11:53 p.m. it was in flames and by 12:30 a.m. it was in a crumpled heap at the feet of police officers guarding the home of University President Morton Schapiro.

About 300 students, led by members of NU Community Not Cops, gathered in front of Foster-Walker Complex Saturday night for the sixth consecutive day of marches demanding the abolition of University Police.

“You guys are here tonight for a cause,” one student said to the crowd. “And you’re here to protect Black and Brown lives.”

“The power of the people don’t stop”

Music and spirited chants spread among the masked crowd as students marched through Evanston Saturday night. Some students tagged sidewalks and buildings, including UP headquarters, with “F–k 12,” “ACAB,” “Abolition is the Solution” and more.

The march concluded in front of Schapiro’s house, where at least three UP officers stood guard behind a University Facilities Management barrier. Other officers were stationed around the block.

Several Evanston Police Department officers stood at the nearby intersection in riot gear as well, some equipped with batons and shields. Standing in front of Schapiro’s house, students reminded the president of their demands. He didn’t make an appearance at any of the past week’s protests, and hasn’t personally met with student organizers at all.

“Divest from NUPD, disband NUPD, invest in Black lives and get the f–k out of our University,” one student said to the crowd.

Throughout Saturday’s march, students spray painted abolitionist messaging on neighborhood sidewalks and buildings, including Whole Foods Market, which is owned by billionaire Jeff Bezos. As some students wrote anti-capitalist messages on the building’s exterior, at least one individual smashed a storefront window.

University spokesperson Jon Yates told the Daily in an email the University firmly supports vigorous debate and the free expression of ideas but was disappointed by the vandalism and damage to private and public property.

“Should members of the Northwestern community be found in violation of University policies, state or federal laws,” Yates said, “they will be held accountable through our processes.”

But as students marched demanding abolition of UP, they also urged accountability from the administration, who they said have ignored their demands.

“They care more about private property than human lives,” one student told The Daily. “There is no level of property destruction that we can do that is more violent than the cops existing.”

A summer of “empty promises”

A June 3 petition, which has since garnered over 8,000 signatures, urged the University to disarm, defund and disband UP and redirect the funds to institutions that serve Black students’ wellbeing. It also called on the University to sever ties with EPD and the Chicago Police Department.

At one virtual dialogue this summer, a student involved in NU Community Not Cops who wished to remain anonymous said administrators showed up woefully unprepared.

The student said though panelists were sent materials in advance about abolition, they deflected questions about transformative justice to the one Black woman on the panel — Sekile Nzinga, interim chief diversity officer.

It was disrespectful for those administrators to put no labor on themselves and instead rely on the labor of a Black woman, the student said.

“It felt like they didn’t feel obligated to learn about any aspect of abolition at all,” she said. “Those meetings were stalling tactics and just very performative.”

NU administrators made commitments throughout the summer to creating a cultural change on campus, but Provost Kathleen Hagerty said the University was not committed to defunding UP. Instead, she said, NU is currently reevaluating the role of police on campus. On July 24, she added that there would be “no problem” with disclosing the UP budget. Administrators have yet to release it.

On Sept. 10, the University announced it has engaged two outside consultants to lead a review of UP’s community engagement, operations and policies — including a budgetary review.

Yates said the review involves reporting protocol, an assurance of bias-free policing and the “maintenance of the highest standards for law-enforcement professionalism.”

The University also plans to improve public safety procedures relating to de-escalation and crisis response, which Yates said will ultimately lead to a public report with recommendations, including a discussion of the UP budget.

But some students say these “empty promises” are not enough.

“Stand up, fight back”

NU Community Not Cops started marching daily on Oct. 12 — and the organization said they don’t plan on stopping until the University commits to abolishing UP. Students ended the first march at Schapiro’s home, where they were met by police presence.

“It shows that police are here to be a private security force for the wealthy,” one student said. “You don’t need cops stationed outside of your house. It’s a ton of audacity.”

Prior to Monday’s march, students hung a banner on Weber Arch demanding “Cops out of NU” and another by the Donald P. Jacobs Center reiterating their message to disarm, defund and disband UP. Yates said the University removed the sign from the Arch, consistent with its practice of not allowing any signs to be placed on the Arch.

Yates said the sign was rehung from a tree near the Arch, but it was found laying on the ground near the Arch just hours later.

After Schapiro announced the review of UP’s budget in September, a student involved in NU Community Not Cops told The Daily the organization held a meeting with the outside consultants.

According to the student, the consultants were asking “gotcha” questions that undermined the ideas behind abolition. She said she got the sense from the consultants that the budgetary review would not be fully completed by the end of the quarter.

NU Community Not Cops realized after this meeting, she said, that the University didn’t feel the same sense of urgency as students. If NU is “just going to throw money at the problem,” she said, they could have hired abolitionists to explain concepts like transformative justice.

In her four years of organizing at NU, one student said this is the first time she’s felt supported by wealthy White students. Between generous individual donations and showing up to marches, she said it actually feels like people are getting behind the message of abolition. She added that turnout has increased every single day since the marches began, in part because students have started bringing friends along.

“I don’t see a reason why this has to stop until Northwestern abolishes the police department,” she said. “It really feels like we could keep this up until that happens, and I don’t think the University takes us seriously enough to think that we will do that.”

Throughout the week, students reported harassment from Evanston residents during these marches — from unwanted photographs to hecklers to one driver reaching out of his window to hit students who passed his car.

While students spray painted the street outside the police department Saturday night, one man stood at the opposite street corner with an American flag. There have also been residents out supporting student efforts, raising fists in solidarity or chanting with the crowd.

“When I say Evanston is the most racist place I’ve ever lived, I’m not exaggerating,” one student told The Daily. “But showing up for Black residents in Evanston makes me really happy.”

Abolition above all else

In keeping with the mission of NU Community Not Cops, the goals of the Saturday action were abolitionist — a movement that calls for the abolition of policing and prisons as perpetrators of systemic racism and violence against Black and Brown communities.

Heard alongside calls to defund the police amid Black Lives Matter protests this summer, abolition implies not just the dissolution of the current system of public safety but a reinvestment in a new community-driven system without police.

The June petition outlined several opportunities for the University to invest in and commit to the health and well-being of Black students, such as the allocation of funds and resources to activist groups involved in the pursuit of justice for the Black community. These include the Chicago Community Bond Fund, Black Lives Matter and #NoCopAcademy.

Other ideas included the creation of a fund or grant meant for students facing legal fees or issues after participating in protests or political activism, and ensuring injuries sustained in the course of community-based activism are included in NU-SHIP coverage.

Students emphasized community care throughout Saturday’s demonstration, forming barricades to protect those who were spray painting, blocking bystanders taking pictures, passing around snacks and drinks, and periodically spreading out to allow for more social distancing.

As the group concluded the march outside Schapiro’s house, one leader reminded the crowd of the core elements of their organizing.

“Do not forget what abolition is,” the student said. “Yes, it means no cops. Yes, it means no law enforcement. But it also means that you, every single one of you, built the courage and the community to hold each other accountable.”