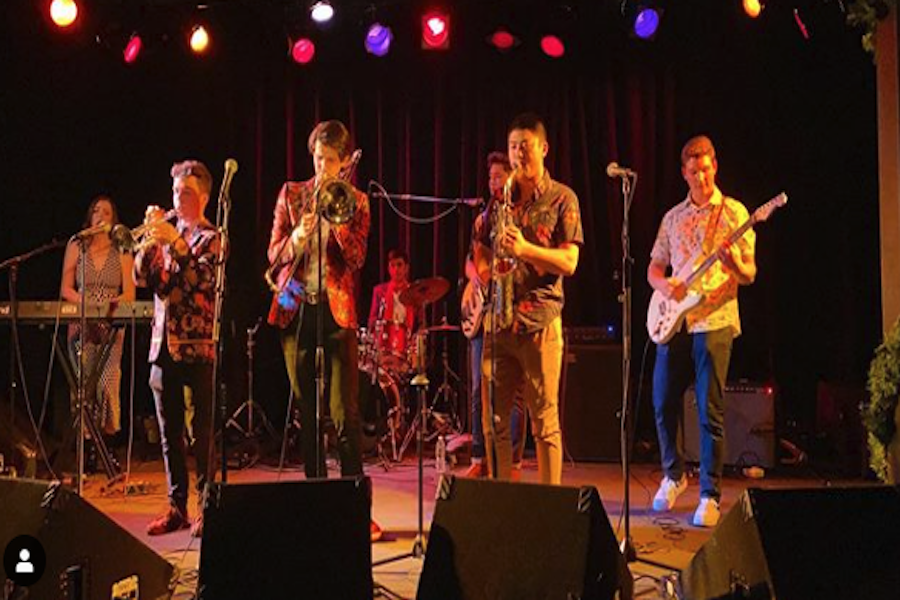 Bienen junior and Morning Dew member Joe Nedder said he wrote “Coffee” about feeling intimidated to talk to someone you’re interested in and building up the courage to talk to them.

The group formed in spring 2019 to compete in Mayfest’s Battle of the Bands for a spot in the Dillo Day lineup. Since then, the band has played several gigs in Chicago performing both covers and original songs.

Bienen and Weinberg junior Joe Nedder said he wrote “Coffee” about feeling intimidated to talk to someone you’re interested in romantically and building up the courage to talk to them.

“I’m the kind of person where I will just spiral in my brain about everything that’s happening,” Nedder said. “So the gist of the song (is) that idealism. A lot of thoughts going on about everything that could be or won’t be … But then it all just comes down to like, let’s just get coffee. And let’s see what happens.”

Nedder, who plays trombone and sings for the band, originally wrote the song for his jazz ensemble, he said, but then brought it to the band. Together, they “Morning-Dew-ified” the song to play to their strengths.

The group added a part to “Coffee” which incorporates a long chain of “sing-speaky lyrics” that describe nervous thoughts. Part of the way through, horns suddenly kick in, driving the song into a big, flush instrumental section.

“It’s my favorite moment of the song, and we all really love that part,” Nedder said. “Especially when we all come in at the end. It’s just always, always a good time.”

Bienen and Medill junior Siobhan Esposito said the group went to Handwritten Recording, a studio in Chicago, to record their originals “Coffee” and “Champagne” this March.

Esposito, who plays keyboard and is on vocals for the group, said recording “Champagne” and “Coffee” was the first time she had been in a studio.

“I look back on that day, and I was like, it was just so much fun,” Esposito said. “We were all vibing. I’m excited to get into a studio again soon.”

Communication sophomore and bassist Eddy Maday said recording was a long process. Each section recorded for two to three hours and then had to wait while the other sections worked.

Nedder said Morning Dew planned to mix the songs with a recording engineer after their session in March. However, the band was unable to return to the studio because of COVID-19 safety restrictions, and members had to mix the songs themselves.

In the following months, members sent different versions of songs and provided feedback in a group thread.

Nedder said releasing “Champagne” on Spotify this May was the culmination of a lot of hard work. It was the first time that Morning Dew’s music became available to listen to online.

“It’s crazy to think about some random person in another state just chilling in their bedroom and listening to our song,” Nedder said. “Like, that still kind of blows my mind a little bit.”

Maday said mixing and promoting their songs helped keep Morning Dew working together during the pandemic, and that they still stay in touch.

However, Maday said the members have “taken a bit of a sabbatical” to develop themselves as individual musicians because they can’t physically meet together.

“I think we’re all just really looking forward to when we can get back in a room together and work on some new originals,” Maday said. “And maybe even one day who knows, play a live gig. Because I know that will be incredible.”