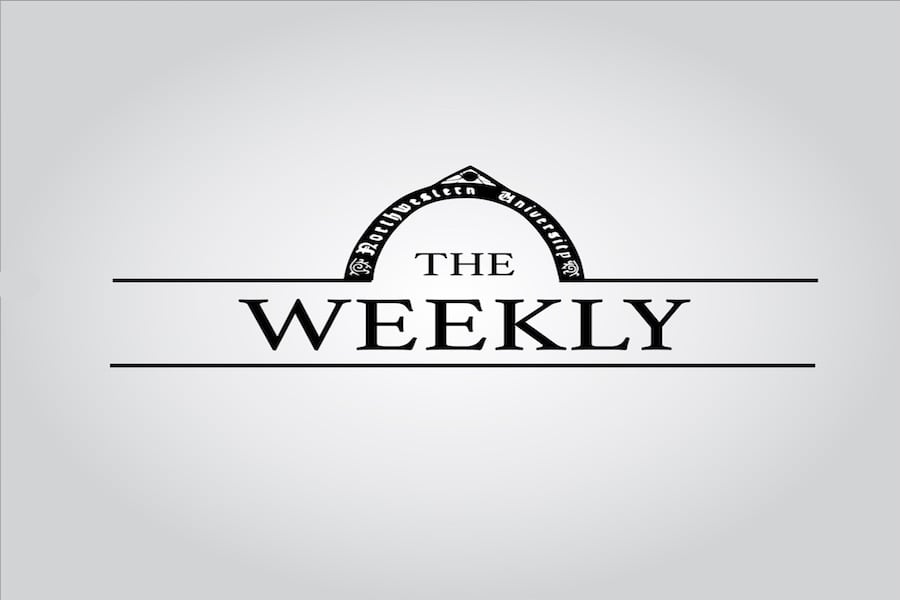 Northwestern Facilities staff power washes away the most recent message on the Rock, PHA cancels formal recruitment and Evanston nominates a new city manager. Listen to this episode of The Weekly to hear directly from the editors and reporters who covered our recent top stories.

HALEY FULLER: Before the episode begins, a content warning: this episode contains mentions of sexual assault. You can go to the three-minute mark to skip that story.

JORDAN MANGI: And I’m Jordan Mangi. This is The Weekly, a podcast that breaks down our top headlines each week.

HALEY FULLER: First up, the Rock was recently painted with an account of sexual assault. Northwestern staff power washed the painted messages away.

HALEY FULLER: And lastly, Evanston City Council nominated Erika Storlie as Evanston’s next city manager, and some residents aren’t pleased. Stay with us to hear directly from the reporters and editors who covered these stories.

JORDAN MANGI: Last week, someone painted the Rock and surrounding ground with an account of sexual assault. It included phrases such as “I can’t be silenced” and “Why doesn’t my rape count?” Recorded footage from the University’s Rock cam shows Northwestern Facilities staff power washing away the written messages.

HALEY FULLER: This comes after a series of messages painted on the Rock implicating Northwestern as complacent in white supremacy over the summer. One notable message read “White Silence Kills.” It was painted over. Later, someone painted the Rock with a tribute to the Black Lives Matter movement.

JORDAN MANGI: Here to tell us more about this story is Campus Editor Isabelle Sarraf. Isabelle, how did you find out that these messages on the Rock were removed?

ISABELLE SARRAF: So we only really got fragments of what the Rock said just based on things that were posted on social media, and based on me physically going there. I was actually just on assignment for a different story. But I walked past the Rock and saw people, clearly from Northwestern, power washing away something on the ground. So, basically some of the fragments and details included the fact that the survivor’s rapist went to Harvard, he was on LSD, the survivor wrote the rapist’s college application — just very obviously concerning messages about sexual assault, and Title IX issues were painted around.

JORDAN MANGI: Did Northwestern say why they washed away these clearly really powerful messages?

ISABELLE SARRAF: They cited the fact that the story could be triggering to survivors of sexual assault as the reason why they washed it away. It did get some criticism over social media about how Northwestern washed the story away. I don’t really know the details obviously because it was washed away, but basically there was just messages about the University being complicit in not dealing with their case.

HALEY FULLER: Also this week, PHA delegates voted to cancel formal recruitment this academic year. Some delegates thought a virtual recruitment would not be equitable. PHA votes pass with a two-thirds majority, meaning at least eight of the 11 chapters had to vote in favor of cancellation for it to pass. PHA told The Daily it could not disclose how each chapter voted.

ISABELLE SARRAF: So PHA’s VP of membership told me that the delegates decided to cancel formal recruitment because of concerns for hosting a virtual one and also there was uncertainty, with the status of the individual chapters because of the Abolish Greek life movement. What the PHA President told me was that a virtual format for formal recruitment would be inaccessible for some potential new members because they were to do it over zoom it requires Wi Fi, it requires a device with video capabilities, so there would show more class disparities too because it would allow (a) sorority to also like see into PNM houses and see their clothing and it really just creates a lot of class conflict and that’s just something PHA cited was like a concern for them, but also the fact that the reasons for canceling recruitment came from COVID concerns. So, yeah, it was mainly just about the fact that a virtual recruitment would be exclusive.

HALEY FULLER: So this is formal recruitment that got cancelled. Can sororities still recruit in other ways?

ISABELLE SARRAF: Even if there is no formal PHA-sponsored recruitment, PHA chapters, depending on their national organization rules, could informally recruit, so that means that there are still methods for these chapters to recruit. It’s just not through the classic, Winter Quarter PHA-sponsored one.

JORDAN MANGI: Can you talk a little about the underlying pressure from the Abolish Greek Life movement and what that means for PHA as a whole?

ISABELLE SARRAF: It is a pretty big deal obviously because after the whole summer and the reckoning with Abolish Greek life. I think there was just a big question of, even if we have people deactivating from their sororities or sororities wanting to disband, the ones that are still around could obviously still recruit. PHA has put out a statement in favor of the abolition of the Greek system and are encouraging Greek chapters to disband their sororities and fraternities, and so far only one sorority has officially disbanded and had its charter suspended, but there are a bunch of other chapters who have either held votes, or at least every single chapter has talked about it. I think that the big looming question was like, OK, even if people are leaving the sororities right now, what’s going to stop the sororities from just re-recruiting new members? So I think the lack of a formal PHA-sponsored recruitment is definitely going to have a big impact on the Greek community.

JORDAN MANGI: Thanks for joining us, Isabelle!

HALEY FULLER: And finally this week, City Council announced Erika Storlie as the finalist for Evanston’s next city manager. She received the most votes between the final three candidates. Wally Bobkiewicz, who used to hold the position, took on a new role as city administrator in Issaquah, Wash. last fall. Since then, Storlie has served as the interim city manager. City Council’s nine members and Mayor Steve Hagerty are set to vote on her contract today. If the vote passes, Storlie will officially become the city manager.

JORDAN MANGI: The city received about 76 applications for the position, and the hiring process has been drawn out since January because of COVID-19. City Editor Jacob Fulton covered this story. Jacob, what has the city manager search timeline looked like since applications closed a few weeks ago?

JACOB FULTON: Since then, the city has announced three finalists. The three finalists then were invited to a public forum where they could discuss different topics with city residents, they could answer questions, things like that. Immediately following the public forum, City Council went and they sat down and they debated the merits of each of the finalists for approximately six hours. After the discussion was over, they had made a decision on who they were going to nominate as the finalist for Evanston’s next city manager.

JORDAN MANGI: Wow, they narrowed the pool down pretty quickly. How are residents responding to the nominations?

JACOB FULTON: Some residents and members of City Council have said that Storlie has handled the current pandemic and the issues caused by it with as much grace as can be expected and that because of that she’s going to be a good fit for the position. However, others have said that Storlie doesn’t exactly align with the city’s proclaimed values in terms of anti-racist activity and reinvesting in Black communities.

HALEY FULLER: And there’s been some controversy around her selection because she was nominated in early summer to be directly appointed to the position without a selection process.

JACOB FULTON: After public outrage and citizen outcry, the City Council voted against directly appointing her to the position. So Storlie’s choice has been controversial because some residents feel like it was always going to be her that ended up being picked, and the selection process was just to appease residents and make it seem like they were entertaining other options. Storlie was up against two other finalists but the city ended up selecting her, they said in the press release, based on her previous experience in Evanston and her already existing knowledge of what the city specifically is dealing with because of COVID-19. On Friday, there was a protest because of Storlie’s nomination, and a bunch of local activists and local grassroots organizing groups came out to respond to the selection and call on City Council to vote against the approval of Storlie’s contract and explore the option of a different selection.

HALEY FULLER: So if the City Council doesn’t appoint Storlie, what happens?

JACOB FULTON: There’s a possibility that another finalist could be chosen. They could go into negotiations and appoint that person fairly soon to the position, or some organizers are calling for a hold off on the appointment until after the upcoming City Council and mayoral elections in April. So if it’s held off until April, then we could see an entirely different selection process, we could see significant delays. It’s unclear right now what next steps might be if the city decides to go back on their nomination and not appoint Storlie.

HALEY FULLER: Thanks so much for joining us, Jacob.

HALEY FULLER: And I’m Haley Fuller. That’s it for this episode of The Weekly. We’ll see you next Monday.