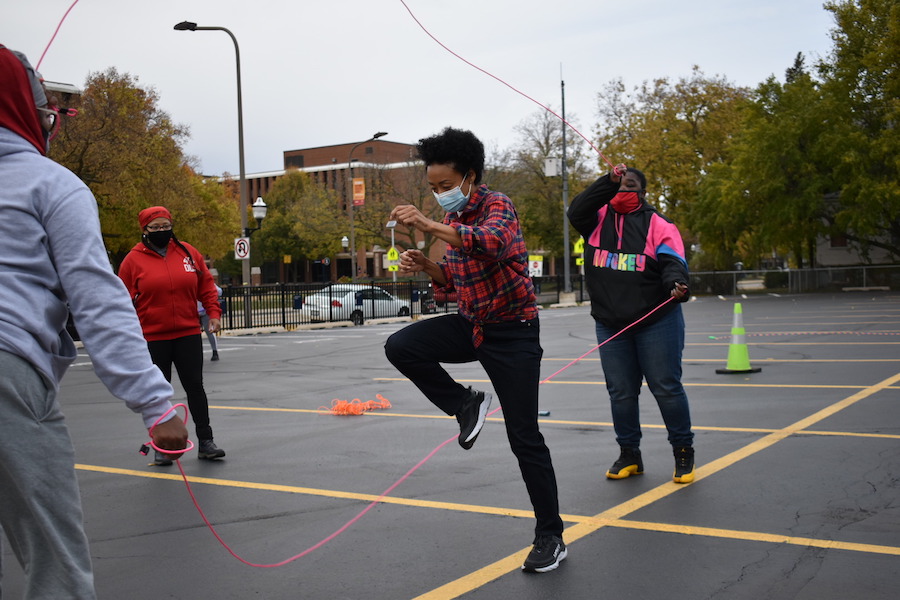 Jumping rope, grooving to music and cheering each other on, Evanston and Chicago residents of all ages gathered outside Evanston Township High School on Saturday to honor Breonna Taylor’s life.

Alongside the event, Haven Middle School student Olivia Ohlson coordinated hygiene product donations as part of her ongoing effort to help those financially affected by the pandemic. Members of the 40+ Double Dutch Club, a nationwide organization with Chicagoland chapters, also joined in to jump.

Taylor was fatally shot by police in Louisville, Ken. in March, sparking nationwide protests for justice. Last month, a Kentucky grand jury failed to charge any officers with her killing.

Organizer Melissa Blount said a Vanity Fair feature recounting Taylor’s life from the perspective of her mother, Tamika Palmer, inspired the event. Blount had never double-dutched before, but when she learned the mother and daughter shared a love for jumping rope, she immediately began planning “Jump Off for Breonna” to celebrate Taylor’s life.

“We’re tapping into this spirit of joy,” Blount said. “I’ve been talking about this whole notion of cultivating Black joy, because there’s so much oppressiveness connected to Blackness in America. I want to lighten it up.”

Evanston resident Miah Logan, who taught Blount to jump rope a few days prior to the event, said “everyone has a story” about how double dutch came into their life.

Logan’s double dutch history, she said, is one of sisterhood and camaraderie. Jumping rope helped Logan, who moved from Korea to Pennsylvania as a child, build a community with the girls on her Philadelphia block.

“I hope everyone can connect with each other through our differences today,” Logan said. “Whether jump-roping or hula hooping or learning a new game, we can learn together and help each other. Remember that this can be carried on outside of this circle today.”

Evanston resident Michelle Jung Janus said she was happy to take in the joy of the afternoon alongside her daughter. Jung Janus said her experiences with racism inform the way she’s exposed her three-year-old to protests and conversations about race over the past year.

Jung Janus previously brought her daughter to a protest commemorating George Floyd in July. She said she was glad for her child’s sake that the Saturday event represented a celebration of life, rather than a mourning of death.

“There’s a fine line between being aware and letting a three-year-old know all the trauma of what’s going on,” Jung Janus said. “But then — some kids don’t have that privilege.”

Ben Blount, Melissa Blount’s husband, said he didn’t jump rope much as a kid because it was “a girl thing.” However, he said he loved the exercise, music and community he felt Saturday.

Ben Blount said he hopes Evanston will engage with more double dutch events down the road.

“The idea of people getting together to do stuff that’s physical is fun,” Ben Blount said. “It’s a good way to bring people together — then infuse that into other actions.”