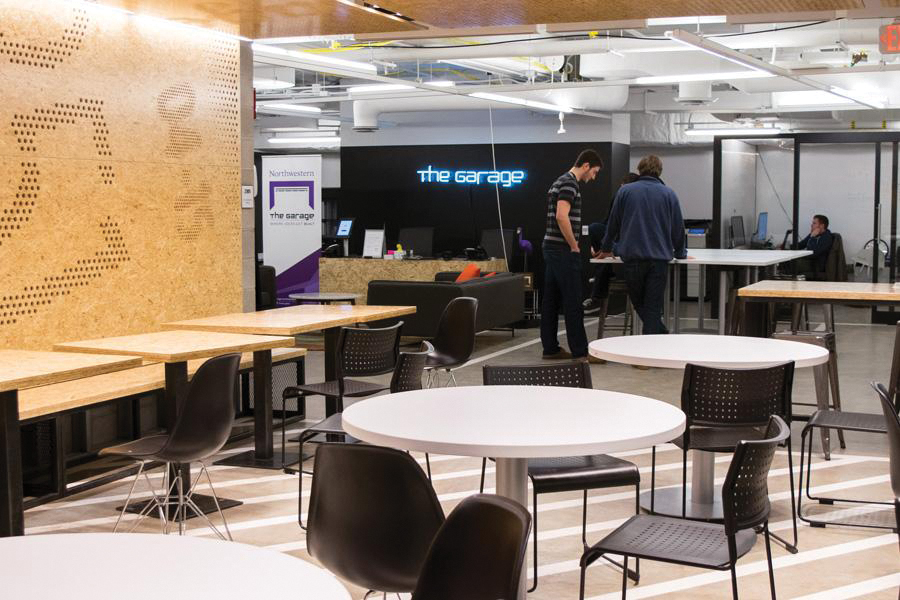 The Garage, 2311 Campus Dr. The Garage provides a space and resources for students to build startups.

Psychology Prof. Jennifer Tackett and Melissa Kaufman, The Garage’s founding executive director, surveyed 26 entrepreneurs thus far to identify what they call the “Successful Entrepreneur Personality” (SEP). The study’s pilot data was published Sept. 29, but the project is ongoing and aims to determine “key aspects of personality that might characterize successful entrepreneurs more broadly.”

The authors employed the Hogan Leadership Forecast Series, a measure for studying characteristics that is “used by over 75 percent of Fortune 500 companies… for leadership selection and development,” according to the report. Their baseline for measuring ‘success’ of an entrepreneur was people who have founded or co-founded a startup that has scaled to a multi-million dollar company.

“Unlike other personality tools that tell us how we see ourselves, (this tool) has a unique twist… it tells you how other people are likely to see you, which can be very valuable in a work environment,” Tackett said.

The findings described the SEP as someone ambitious and sociable, two characteristics that are likely helpful for people starting out in the field. But the most “dramatic” and “quintessential” trait of the SEP, according to the report, is low prudence, which means successful entrepreneurs are risk-takers and able to “pivot quickly.”

“We expected to see low prudence… but it was even more pronounced than we thought it would be,” Kaufman said. “We thought an 18 (on a scale from zero to 100 on the LFS) was extreme… but some of them were only scoring a one or zero.”

They also found two traits — adjustment and interpersonal sensitivity — that are variable, which means they can be low for one SEP and high for another. However, this is an ongoing study, and Tackett said their goal is to survey up to 60 successful entrepreneurs and explore other topics like how they respond under stress.

Even if your traits don’t line up with the study’s findings, Kaufman pointed out most successful entrepreneurs are part of a team, so it’s important to find people who complement your own strengths and weaknesses.

When study participant Neal Taparia (Weinberg ’06), founder of classic games and brain training app Solitaired, was at Northwestern, there was not much of an entrepreneurship scene. Taparia was excited to see the “burgeoning entrepreneurial energy” when he connected with Kaufman and The Garage, he said.

When he read the study’s findings, Taparia felt that they made sense and resonated with his own experiences in the entrepreneurship world.

“It reflected a lot of my own behavior,” Taparia said. “I’ve oftentimes had to throw myself out there for business opportunities… you have to have ambition.”

Taparia also pointed out that this study is “a valuable insight” for new entrepreneurs looking to succeed.

Tackett and Kaufman, the authors of the study, said they hope the pilot data helps students to heighten their level of self-awareness as aspiring entrepreneurs.

“There’s no bad personality trait… the key is knowing who you are and using that information about yourself to move towards your goals,” Tackett said.

— Letter to the Editor: The Garage is a valuable resource to student start-ups