Smith: Down-ballot voting is more important than ever 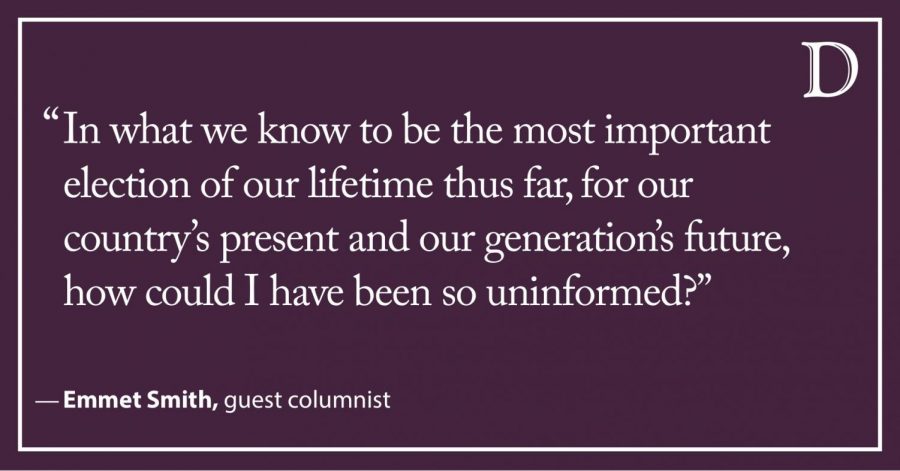 I have been to the polls twice in my life.

The first time was November 2004, when I proudly pulled the lever on my dad’s vote for John Kerry. Stepping into that voting booth was a triumphant introduction to the political process, but alas, my attempt to undermine our democracy as a 5-year-old committing voter fraud did not win us the election.

Fast forward to the March 2020 primaries, my first time voting in person as an adult, in the middle of a finals week when we were just learning about an infectious disease with a funny name. My focus was, like 16 years before, firmly on the presidential race — but only the presidential race. I found myself standing at the ballot machine frantically looking up all the local candidates and wondering: what even is a Water Reclamation District, and why am I voting for it?

In what we know to be the most important election of our lifetime thus far, for our country’s present and our generation’s future, how could I have been so uninformed?

To begin, we have to unpack our culture surrounding down-ballot races for state and local offices. These are positions like school board, city council, commissioner, prosecutor and other elected officials whose names we rarely know. They are typically placed below the presidential elections, hence the term down-ballot.

I myself had no idea who was running locally until I joined the Sunrise Movement immediately following the horrific first presidential debate. Sunrise is a youth-led national movement fighting for climate justice and a Green New Deal — anyone can get involved at any level, from attending a meeting once a month to organizing phonebanks, protests and policy reform. Sunrise endorses Green New Deal champions at a local level, which turned me on to some really exciting candidates like Marie Newman, who is running for Congress from Illinois’ 3rd District.

Folks like Marie and other candidates further down the ballot determine the laws and policies impacting schools, health care, policing and other issues essential to our daily lives. There are 70,000 seats up for grabs this year — 96 percent of which are local elections — yet in many cases, these candidates aren’t even being voted for by huge chunks of the voting bloc.

There are so many reasons why it’s crucial to stay tuned in to the local elected leaders affecting your daily life. Elected DAs, prosecutors and judges determine how cases, charges and sentences are handled. Even more overlooked offices, like coroners, can sometimes win elections with a tiny percentage of the voting bloc, which has resulted in coroners without medical degrees or who have falsified medical reports in police shootings.

If you believe that Black lives matter and you want to break down racist structures of criminal justice, do your homework on down-ballot elections.

We are also voting on measures at the state level, like the Fair Tax in Illinois. This amendment proposes a graduated income tax that would increase taxes for individuals making over $250K annually while giving 97 percent of Illinois a tax break, generating $3 billion in the process. This money is how we can get green infrastructure, affordable housing, alternatives to policing and so much more.

In 2018 we saw more LGBTQ+, Native American, Muslim American and women candidates elected to public office than ever before. The more we replace the folks in power with those that are truly representative of our democracy, the more we’re going to get the types of diversity that we want to see in government.

Research your local candidates by checking what their platform is, who endorses them, their previous experience and how they interact on social media. Look up voter guides that align with your values for your community and vision for its future.

This year I can’t wait to vote — not just for Joe Biden and the presidential election I’ve paid attention to since I was five — but for every candidate down the ballot who will profoundly change the culture and experience of my community.

Emmet Smith is a School of Communication Senior. He can be contacted at [email protected]. If you would like to respond publicly to this op-ed, send a Letter to the Editor to [email protected]. The views expressed in this piece do not necessarily reflect the views of all staff members of The Daily Northwestern.