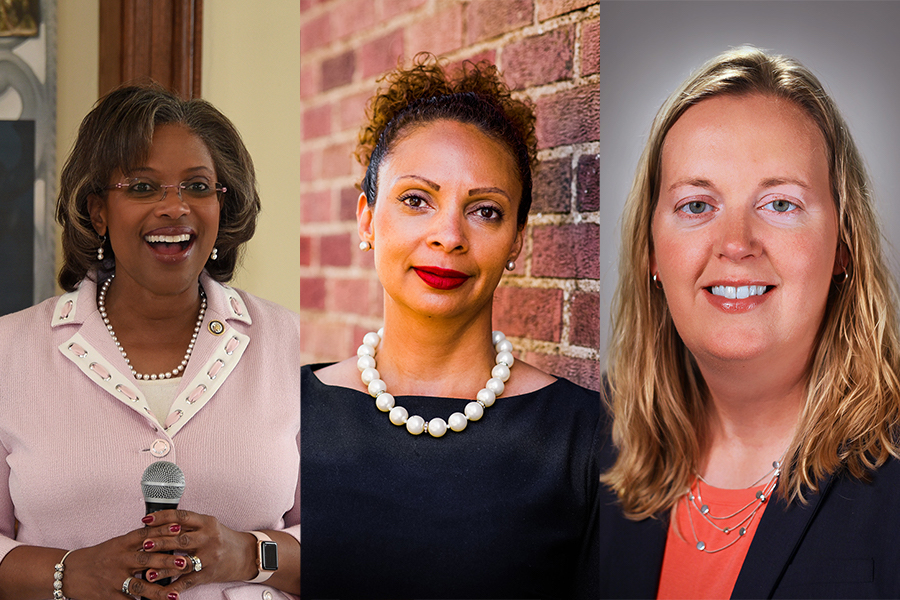 The three finalists for Evanston’s city manager position. From left to right, the finalists are Aretha Ferrell-Benavides, Marie Peoples and Erika Storlie.

Residents expressed dismay at the City Council’s city manager search process, accusing the council of a lack of transparency and contradicting their commitment to end structural racism during a Monday meeting.

During the public comment period of the meeting, residents said the city is discounting its residents by keeping portions of the selection process private. Many also questioned the qualifications of Erika Storlie, the city’s current interim city manager, who is also a candidate for the permanent position.

Storlie has been interim city manager since September 2019, when she replaced Wally Bobkiewicz, the last person to hold the city manager position. In January, the city hired GovHR USA to conduct a nationwide search for the position, which culminated in the selection of three finalists. On Oct. 7, the three finalists answered questions from residents during a public forum.

The next day, the City Council and the mayor made their choice for city manager during an executive session which was closed to the public, according to Mayor Steve Hagerty.

The council’s decision is expected to be announced tomorrow, with a contract for the candidate to be voted on during a special Oct. 19 council meeting. Over a dozen residents used Monday’s public comment to speak on their issues with the search.

“What I saw were two extremely educated and experienced and polished outside candidates who came prepared to tell the citizens of Evanston how they would handle our equity, economic and environmental struggles,” Karla Thomas, a member of the City of Evanston’s Equity and Empowerment Commission, said, referring to the public forum. “But what I also saw was a local candidate who struggled to express any true understanding of equity past a buzzword level of understanding.”

In a Monday news release, the Community Alliance for Better Government said residents were “outraged and betrayed” following the public forum. The release said many residents felt Storlie acted misleadingly during the forum when she tried to take credit for Evanston’s reparations initiative.

Thomas said Storlie’s advancement to the finalist stage, and the potential for her to be chosen as the city’s finalist, represents the double standard Black women often face in the workplace. She said she viewed the other two candidates as significantly more qualified than Storlie.

Residents also criticized the voting process for the city manager position. The decision was made in a closed session, and the votes were not made public. However, some members of City Council opposed the policy. Alds. Cicely Fleming (9th) and Thomas Suffredin (6th) requested the council’s votes be made public, Fleming said in an update on her website, while calling the decision “by far the most important vote” she will have.

Despite the requests of Fleming and Suffredin, and to the dismay of many residents, the council moved forward in their decision to deliberate in executive session, where aldermans’ individual votes are not shared with the public.

Storlie, who is White, is vying for the position against two Black women — something multiple residents, including Sharon Kushiner, noted during the comment period.

“Ms. Storlie, you will become city manager in Evanston as you elbow out two Black women eminently more qualified than you,” Kushiner said. “As you take your place in this city, understand your place in history.”

However, some residents said they believe the search process was fair. Former Ald. Delores Holmes (5th) said she believes the process was “open” because the aldermen making the decision were elected by their constituents. She also encouraged residents to hold their aldermen accountable in the next election, which is scheduled for next spring.

“Stop thinking that everybody has a card on their sleeve — I don’t think that,” Holmes said. “We’ve got to stop being conspiracy theorists. That is something that is making our country sick. I’m very upset this evening. This is not the Evanston that I know or love.”