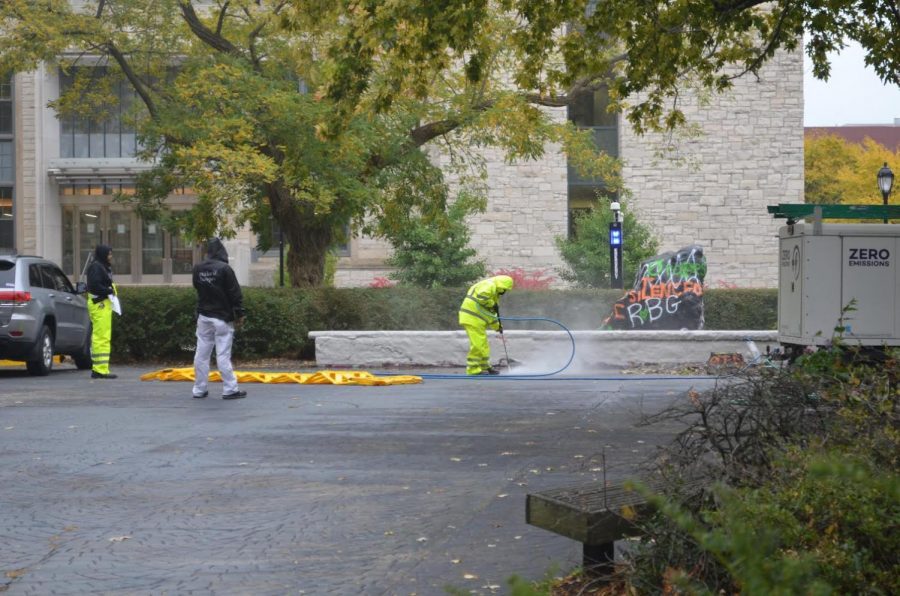 Members of the Facilities team pressure wash messages painted around The Rock.

Earlier this week, The Rock and its surrounding area painted an account of a sexual assault that highlighted the University’s complicity. On Monday, Northwestern staff used a pressure washer to wipe most of the story away.

“I can’t be silenced,” The Rock and its surrounding walls read. “Why doesn’t my rape count?”

Fragmented details of the story surrounded The Rock, including how one student’s rapist went to Harvard University, the survivor wrote his application, that he was on LSD and other messages related to Title IX issues. One message, directly painted onto The Rock, said Harvard told NU to drop the survivor’s case.

In an email to The Daily, University spokesperson Jon Yates said the messages were removed from the wall in front of The Rock by members of the Facilities team.

“While the University supports free speech and freedom of expression, we were concerned the message on the wall could be a trigger for sexual assault survivors,” Yates said.

Facilities wrote to The Daily that their actions were following “standard operating procedure,” and said “graffiti” removal is required after the display is reviewed and deemed offensive by University senior leadership.

The removal comes weeks after The Rock had been painted over twice this summer after students used it to display ongoing demands for social and racial justice. Last year, the University painted over protest messages on The Rock denouncing the University’s reluctance to remove founder John Evans’ name from campus buildings.

— “Your silence is deafening”: After three months, the Rock was repainted twice to reflect ongoing student demands