“Orfeo Remote” takes opera from the stage to the screen 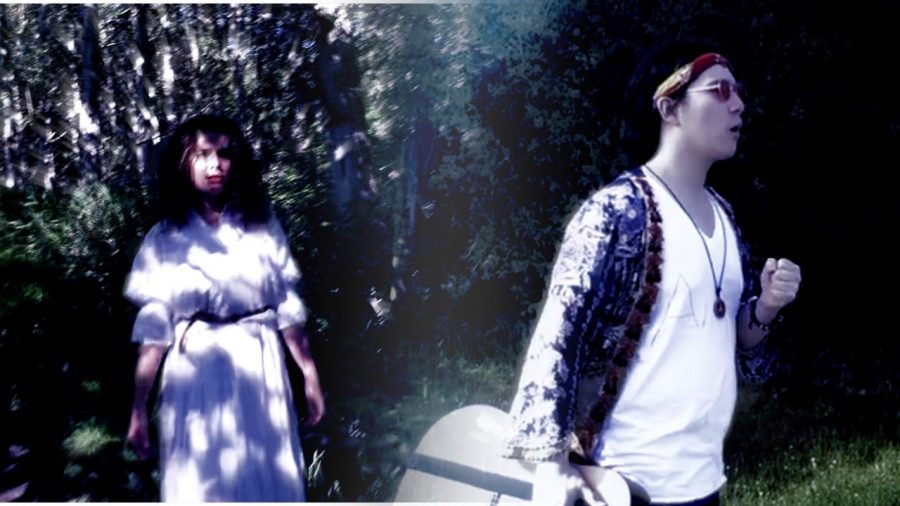 Lucy Evans and Nicholas Lin in “Orfeo Remote.” Despite looking like they’re together, the two performers shot the scene separately.

As theaters around the world went dark in March, Bienen’s spring production of Claudio Monteverdi’s “L’Orfeo” was just ramping up.

Performing the opera in Cahn Auditorium was no longer an option, so Director of Opera Joachim Schamberger and conductor Stephen Alltop reimagined the performance to create “Orfeo Remote,” a virtual opera film.

Over 30 singers and 20 instrumentalists had to learn new skill sets, including audio and video recording, to turn the opera into a virtual production. In order to ensure that the performers had backing tracks to learn from and practice with, Alltop played and recorded every note of the opera on his harpsichord, then sent them to the performers.

After they recorded themselves singing or playing their instruments, Alltop rerecorded the accompaniment to match the differences in their tempo and pitch. Over 1,400 audio files went into the creation of “Orfeo Remote.” The project is not done, however, as Schamberger is still editing the videos. Alltop said he hopes to finish the opera by the end of 2020.

“Both the director and I, and the students, just made the commitment and there was no turning back. So it meant a whole lot of acquiring new knowledge and skills,” Alltop said. “I ended up feeling by the time it was done like, ‘Okay, this was the biggest single project I’ve ever done.’ It felt endless. I literally worked from morning until usually after midnight for weeks and weeks in a row.”

Although “L’Orfeo” tells the Greek myth of Orpheus and his quest to the underworld to bring back his love Eurydice, Schamberger reimagined the story to fit the pandemic. The character La Musica (music) introduces the story and acts as a narrator. However, instead of depicting La Musica as a goddess, “Orfeo Remote” portrays her as a Bienen student who is dismayed by the shuttering of theaters and end of live performances, and calls and texts her friends to ask if they want to put together a virtual opera during the pandemic.

La Musica essentially tells the story of the students and faculty putting together the opera, Schamberger said. The character creates a YouTube channel where she posts segments of the opera as a miniseries — exactly the way the project itself will be released when it’s finished.

In this production, the myth of Orpheus that La Musica introduces takes place in the 1960s, juxtaposing the limitations of the pandemic with the physical closeness and togetherness of the hippie movement.

In addition to learning how to engineer audio and film, the cast Zoomed to discuss angles and scenery to ensure cohesion in the story. Because they were spread out across the country, it was difficult to find locations that looked the same and make the screen directions look seamless.

Despite the difficulties of creating a remote opera, “Orfeo Remote” gave the students a project to focus on, Bienen senior Nicholas Lin, who played Orfeo, said. In addition to the hours he spent rehearsing and filming, Lin also created his own props and costumes.

He said that filming the scenes properly and getting all the angles right was difficult. Lin had to redo a scene when he stretched out his arm at the wrong angle while passing a wad of cash to a castmate who wasn’t there.

“It’s just like a testament to the things that COVID makes us do. It’s very personal, and it made it really fun, too,” Lin said. “For a lot of us, it was definitely a way to just do something, especially when singing in general is just not a good idea. It just gave us something to do that involved other people.”

“It was a great experience, even though it was like, ‘Oh, there’s so much work, so much music we have to learn,’” Hwang said. “It was great to feel like I was still making music with everyone else, and I think that’s what kept me going.”