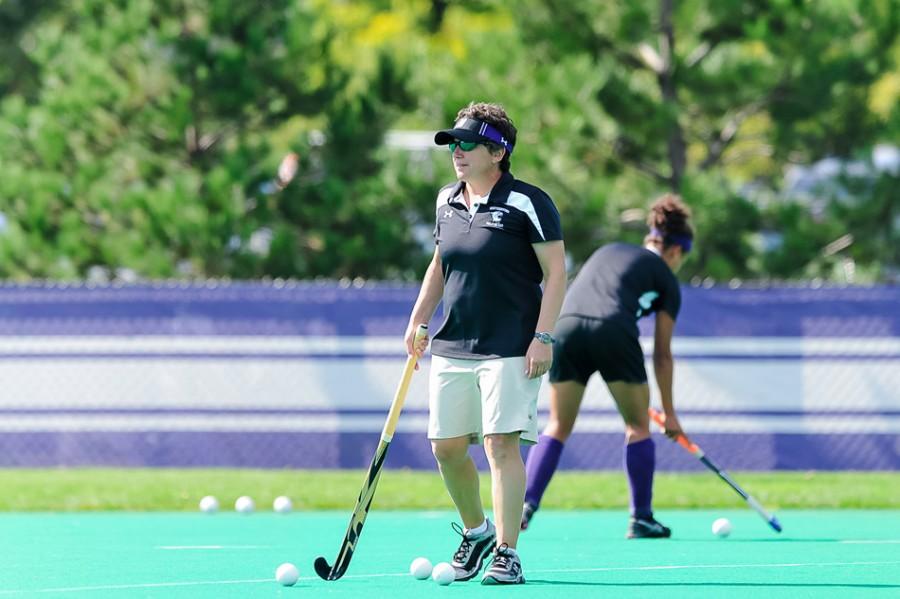 Field Hockey coach Tracey Fuchs reflects on how practice during COVID-19 is going.

After a strong 2019-2020 season that brought them to the NCAA tournament, Head Coach Tracey Fuchs said Northwestern was in a good place to repeat their success again this fall. However, the Wildcats’ hopes were delayed with the postponement of the Big Ten’s field hockey season. Fuchs spoke with The Daily about her team’s practice schedule, new players and goals for a tentative spring season.

The Daily: What was your initial reaction when you found out that your season was postponed?

Fuchs: Realistically, I knew it was coming. The world’s in a pandemic. When you’re losing hundreds of thousands of lives, it makes sense that sports can’t go on. I’m a realist, and I realized that that was the best decision at the time. Fast forward a little bit, I’m really happy that the testing has improved. We will hopefully get a season in the spring.

The Daily: Your team is coming off a strong 2019-2020 season. How have you maintained practice intensity, even with COVID-19 restrictions?

Fuchs: It’s been great — the student athletes have really been phenomenal. I wasn’t sure, especially with the heat, if we were going to be able to wear masks at practice, but we’re doing great. Everybody’s wearing a mask all of practice and feels safe. We’re doing the best we can when we come inside to social distance and follow the protocol. We’ve had a great few months and are looking forward to the winter or spring season.

The Daily: How has the format of practice changed?

Fuchs: It’s hard to tell expressions when everybody has a mask on. We’re not doing any intentional contact, but in most of our sport, that’s the case. We’ve been really lucky that we’ve been able to do 90 percent of what we always do. That 10 percent will be coming soon. We’re just happy to get out there and run around.

The Daily: Beyond the field, what are some of the other challenges that your team is facing due to COVID-19?

Fuchs: Even though we’re in pods, when you’re inside or in the dorms, you need to really comply with the rules. So just because a pod teammate might be your roommate — which we consider family — you still need to make sure you’re social distancing, wearing a mask and doing all the right things. It’s been a little tricky, but I would say our kids have done really well in those departments.

The Daily: How have the freshmen adapted to such an unusual first year at Northwestern?

Fuchs: This has really worked out for them. Typically, we have 10 days, and then we have a match. Now, they’re getting three months of tactical and technical coaching experience. They’re going to be so far ahead of where they would have been had we had a fall season. With 10 first-years, it’s really going to pay off for us.

The Daily: Have there been any other good things that have come out of this time?

Fuchs: Adversity is always good. Granted, I wouldn’t want another pandemic in my lifetime. The ability to adapt and adjust really plays into sport. From the coaching staff down to our players, we’re just taking it one day at a time. That’s always what we’ve asked our players as coaches, and with COVID-19, this is what we’ve had to do. I really couldn’t be more proud of our team and how they’ve handled the situation. Initially, everybody was pretty down about not being able to have a fall season and possibly not a spring season. Now that the spring is looking way better than it was in August, we’re pretty excited.