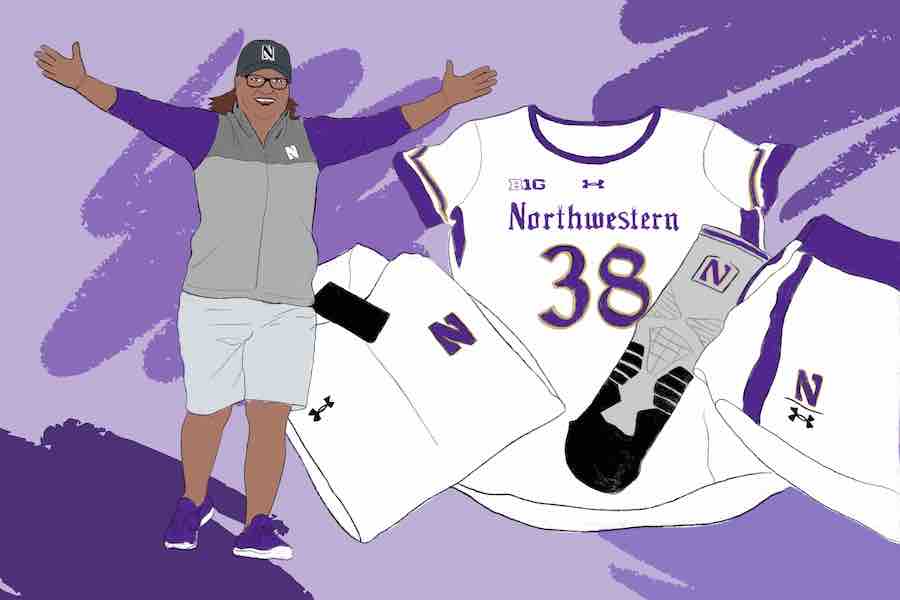 Over the past 30 years, Meli Resendiz has had a front-row seat for some of the most memorable moments in Northwestern sports history.

Field hockey’s Final Four run in 1994? Resendiz was there. Women’s basketball winning a Big Ten title in her first year at NU in 1990, and then another in 2020? You bet. Softball making back-to-back trips to the Women’s College World Series in 2006 and 2007? Absolutely. And football’s historic 1995 season, which culminated in a Big Ten championship and a trip to the Rose Bowl? But of course.

“I’ve been there on the sidelines, just quietly doing my work, and happy to be a part of it in some small way,” Resendiz said. “It’s just really humbling, and I’m very grateful for all of these years to have been a part of it.”

As an associate director of equipment services for Northwestern Athletics, Resendiz has seen it all. But the Evanston native took a highly unconventional path to NU.

Resendiz attended Lincoln and Dewey Elementary Schools, Nichols Middle School and Evanston Township High School. After high school, she found herself working in recreation at the YWCA Evanston/North Shore, trying to earn some money to help care for her mother. One of the lifeguards there was a NU field hockey player, and she told Resendiz that the athletic department had a job opening for an equipment manager.

After meeting with Bill Jarvis, the head equipment manager at the time, Resendiz got the job. The chance to go to school at NU while working full time there sold her, and for the next 16 years, she worked in the equipment office by day while taking classes by night. She earned her undergraduate degree in psychology in 2006.

“Working full time at Northwestern, I had to pay for every single class along the way,” Resendiz said. “It was semesters, while the day school was quarters. I would take three classes a year, so I wasn’t fast-tracked on that at all.”

Her job has evolved significantly over time. When she started, Resendiz and the other equipment managers would track down every athlete at the end of the season to make sure they turned in all their gear, from T-shirts to sweatpants to socks.

But in the early 2000s, schools started signing multimillion dollar contracts with big companies. NU was with Adidas for a time before partnering with Under Armour in 2012. One of Resendiz’s main responsibilities now is to help manage that large budget.

Resendiz currently takes care of the volleyball, softball and women’s golf teams, and a typical day for her depends on the season. During the summer, she’ll prepare an individual kit for each player, coach and administrator. In the fall, she’ll already be ordering equipment for the following year.

“All orders are pre-booked a year in advance,” Resendiz said. “So it’s a constant rhythm of placing the orders in the fall, working the seasons during the year, and in the summer, receiving and preparing again. It’s just a constant job in that way.”

Resendiz has worked with the softball team for nearly her entire time at NU. When Kate Drohan arrived as an assistant coach in 1998 — she was elevated to head coach in 2002 — she was immediately impressed by the energy Resendiz brought to her job.

The team brings her on road trips as often as possible, and beyond managing their gear, Drohan said Resendiz is great at establishing relationships with the players. Resendiz, trainer Natalie Meckstroth and strength coach Tyler Jorgensen have formed what the Wildcats call their “hype squad,” helping create momentum in the dugout.

“She is so positive and so consistent, and is always present for them,” Drohan said. “It’s amazing when our alums come back, Meli is usually the first person they go see. She’s tremendous at keeping in touch with people. She’s a connector — she brings people together.”

Drohan described herself as a “traditionalist” when it comes to uniforms — for example, the Cats will typically wear white on Friday, black on Saturday and purple on Sunday for a Big Ten home series. But she said Resendiz has pushed her to get out of that traditional mindset.

In 2014, Northwestern and Under Armour debuted the black “Gothic” uniforms, with the font meant to resemble the signs in front of campus buildings. Football was the first team to wear them, with Weber Arch portrayed on the backs of the helmets, and soon, several other Wildcat teams got their own versions. But last year, Resendiz helped design a white Gothic uniform, known as “Gothic Ice,” for the softball and lacrosse teams.

“We knew something cool and new was coming, but we had no idea it was at that level,” said Morgan Newport, a fifth-year senior softball player. “Meli always has new creative ideas up her sleeve. She takes so much pride in how good we look, and we love her for that.”

Resendiz, for her part, said the Gothic Ice uniforms were some of her favorites.

“Anybody that attends Northwestern University, they know the signs, they know the arch, they know the significance,” Resendiz said. “I got ahead of everybody on the white Gothic, because white is such a hot color right now. So I had the opportunity to present that idea to the Under Armour reps, and they ran with it.”

Resendiz estimated that when she was first hired, she was one of about 20 female equipment managers in the entire country. But at last year’s Athletic Equipment Managers Association convention, she said there were roughly 200 female attendees.

She has been widely recognized for her work. Resendiz was named the National Equipment Manager of the Year in 2007 and has held many roles with the AEMA, including vice president, secretary and treasurer. But the most important recognition for her has come from her colleagues at NU.

“What makes Meli so good is that I don’t even know the things that she does,” Drohan said. “She just manages everything and handles it in such a professional way. She’s a real gift for our program.”