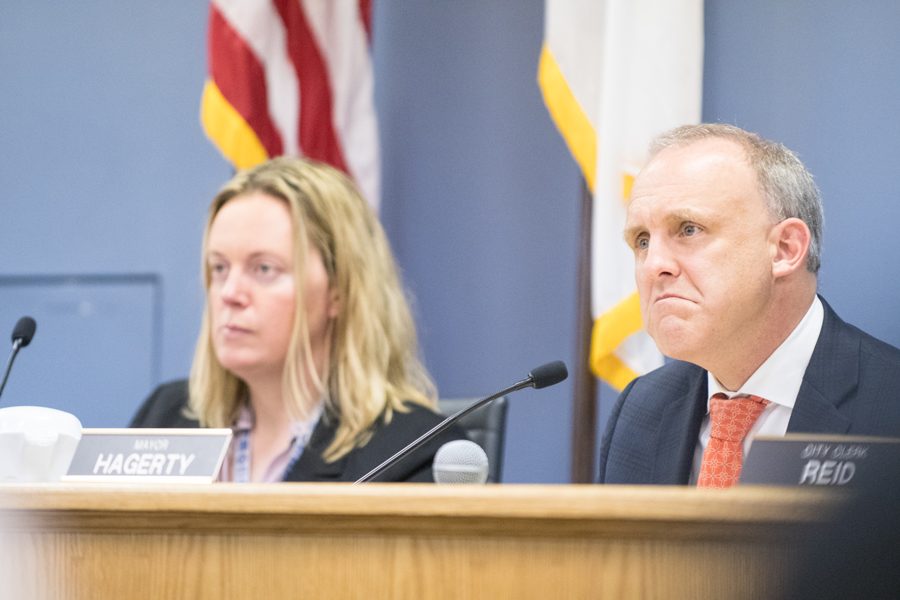 Mayor Steve Hagerty and interim city manager Erika Storlie. The city made cuts to its budget in hopes of reducing the long-term financial impact of COVID-19 on Evanston.

After a COVID-19-driven recession dropped city revenue, Evanston slashed portions of its proposed budget in hopes of reducing long-term deficits.

Due to the pandemic’s toll on sectors like hotels, athletics and entertainment, Evanston is facing an estimated revenue loss of $12 million this year, Hitesh Desai, the city’s chief financial officer, said. After cutting costs, the city’s proposed budget will run a $2 million deficit, Desai said.

The largest cuts to the budget, said interim city manager Erika Storlie, lie in police funding reductions. Expected to save the city up to $1.8 million, the proposed budget will eliminate 11 currently vacant officer positions.

The 2020 adopted budget called for over 160 sworn police officers. At the moment, only 146 of those positions are filled, so the city is already operating “with some level of vacancy,” Storlie said.

“I don’t anticipate that there will be a noticeable difference in the level of service the city is receiving,” Storlie said. “We are not eliminating any actual positions that will be filled, in terms of officers on the street.”

Additionally, the city is planning to cut a records input officer and a towing coordinator. Two currently unfilled police commander roles and four desk officer positions will remain vacant, but will not be eliminated.

Storlie said in the past, when police chief Demitrous Cook was a younger officer, crime rates were higher but EPD had fewer officers on the force.

“Now we have more officers and less crime,” she said. “Over time, it’s prudent to evaluate your police force and your crime numbers to see if they still match up.”

The cuts to Evanston Police Department’s funding come amid national and local calls from activists to defund police departments in response to police brutality incidents. In Evanston, organizers from Evanston Fight for Black Lives have called for at least a 75 percent reduction to EPD’s 2021 budget.
Money from the current reductions is not being reallocated into social service programs, which is what many activists have said they hope to see. Instead, the money is being eliminated entirely from the budget to bridge the deficit.

“When the revenue is gone… the money isn’t there to reallocate,” Storlie said. “It’s simply gone. The pie is a lot smaller than it was last year, so there are no savings to move to anything else. We’re still trying to make ends meet with what we have.”

The city is currently negotiating with the police union to understand which other concessions they might be willing to take, Storlie said. As a result, the cuts to EPD’s budget could increase in the final budget. Storlie also said she expects the city will invest in alternative response models over the next decade, which could “organically” draw down the police budget in the future. One such program is being piloted in 2021, with funds coming from the Health and Human Services Department.

In addition, the proposed budget asks District 65 and District 202 to fund a portion of the school resource officer budget. Starting next fall, the districts will be expected to pick up 25 to 30 percent of SRO expenses, a share that should escalate to around 50 percent over the next couple of years, Storlie said.

“We see school resource officers as a partnership,” Storlie said. “In a true partnership, there is some level of cost sharing.”

Health and Human Services amid a pandemic

In 2020, the city’s Health and Human Services Department received $6 million in funding for its yearly operations. However, the original budget didn’t plan for COVID-19.

As a result, the department had to fund additional programs to support the city’s contact tracing efforts, senior citizen programs and other pandemic-related expenses. Looking ahead, some residents said the department should receive more funding to offset additional demands because of COVID-19.

For the 2021 budget, the department will receive $550,000 in additional funds, which will be generated by an increase in the Human Services tax levy. The money will cover the implementation of an alternative emergency response plan, as well as added support for senior services and general baseline expenses.

The department has also received a $420,000 grant for contact tracing, and will hold a senior management analyst position open to save money.

The proposed budget also includes a 5.9 percent property tax increase. If this increase passes, Desai said residents could pay around 28 additional dollars per $100,000 of property — around $140 for a $500,000 home, for example.

Last year, the city had embarked upon a three-year plan to replenish its reserves when the pandemic shook the city’s economic foundation.

“We got hit while we were down,” Storlie said. “Next year, the only increase to the general fund from property balance is going to be to support contribution to the fund balance.”

City staff are also proposing residents pay an additional dollar each month for trash pickup, and could raise the annual property waste pickup fee from $25 to $35 annually, effective in July. The fee, Storlie said, still represents less than half of the city’s “heavily subsidized” yard waste pickup expenses.

The only additional staff position proposed for the city budget, Storlie said, is a property maintenance inspector who would deal with a “perceived lack of maintenance” around rental properties.

Through October 17, the city is observing a statewide eviction moratorium, which Gov. J.B. Pritzker has already extended several times. In addition, a Centers for Disease Control-issued federal eviction moratorium is set to expire at the end of the calendar year.

Both moratoriums protect tenants who fail to make rent payments for COVID-19-related reasons, but neither extend rent forgiveness for missed payments or protect residents from evictions unrelated to COVID-19.

“We’re anticipating, potentially, a large number of evictions once the moratorium is lifted,” Storlie said. “Making sure those properties, if they do become vacant, are maintained — that’s why we’re adding the (property maintenance inspector) position.”