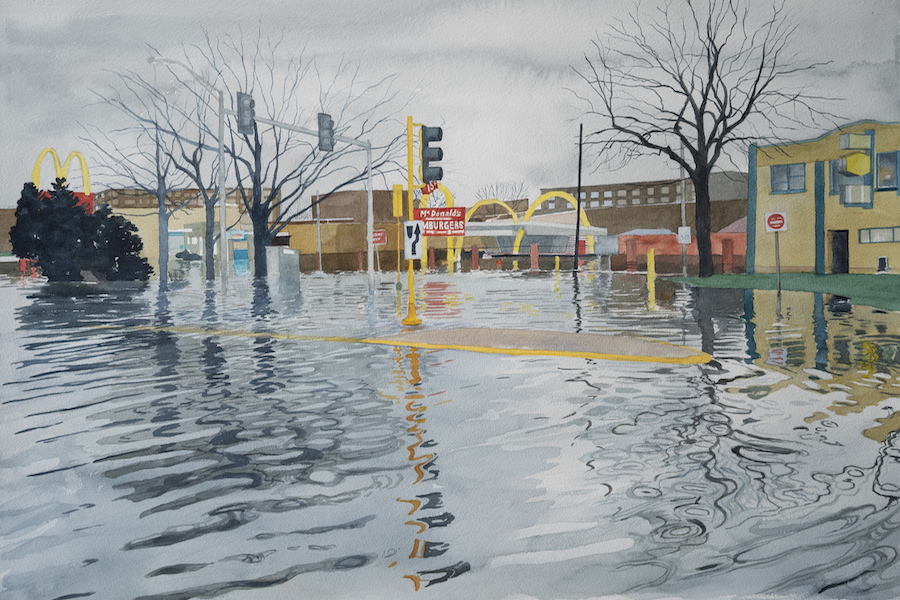 “Des Plaines McDonald’s” by Meredith Leich, one of the artists in this collaboration. It is part of the series “Chicago and the Rain” and uses watercolors to portray flooding and high precipitation events in Chicago.

“Third Coast Disrupted” also consists of a series of online and in-person events, running from Sept. 8 to Oct. 30 at Columbia College Chicago’s Glass Curtain Gallery. Organized by project director and lead curator Christine Esposito, the exhibition portrays the impact of climate change in the Chicago area.

After she came up with the idea of the collaboration, Esposito said she invited Packman and Horton, along with a team of other scientists and artists, to work on what ended up becoming “Third Coast Disrupted.” As scientists, Packman and Horton said they worked with the artists and helped them come up with their art by providing them with information on how climate change functions in the Chicago area.

Packman said though the scientists provided their input on the art being made, the artists were “completely in control” of their own projects.

“Depending on the artist, they had an initial vision, we provided information, they modify their vision,” Packman said. “And in the end, they kind of each went off on their own and then produced these final products that were great.”

One piece of art in the exhibition is the “Chicago and the Rain” series by Meredith Leich, which used watercolors to portray flooding and high precipitation events in Chicago. One of her pieces in the series, “Des Plaines McDonald’s,” shows a McDonald’s in a Chicago neighborhood flooded in water.

Horton said the piece is “not like your typical art,” but rather “art of an extreme event.” The Midwest has seen a significantly uptick in extreme precipitation, he said, and as a result, the city has trouble dealing with the amount of water because it isn’t something that has happened here in the past.

“We’re getting more water than we’re used to,” Horton said. “And so, figuring out ways to drain that water away has become challenging but also started to impact people in negative ways, so sewers (are) backing up into people’s basements and issues with flooding streets and so on and so forth.”

Horton also said though each person may get different messages out of these pieces of art, the biggest picture one can get from them is that climate change is a “real concern” to society at large. Climate change isn’t just relevant for future generations, he said — it’s something happening right now.