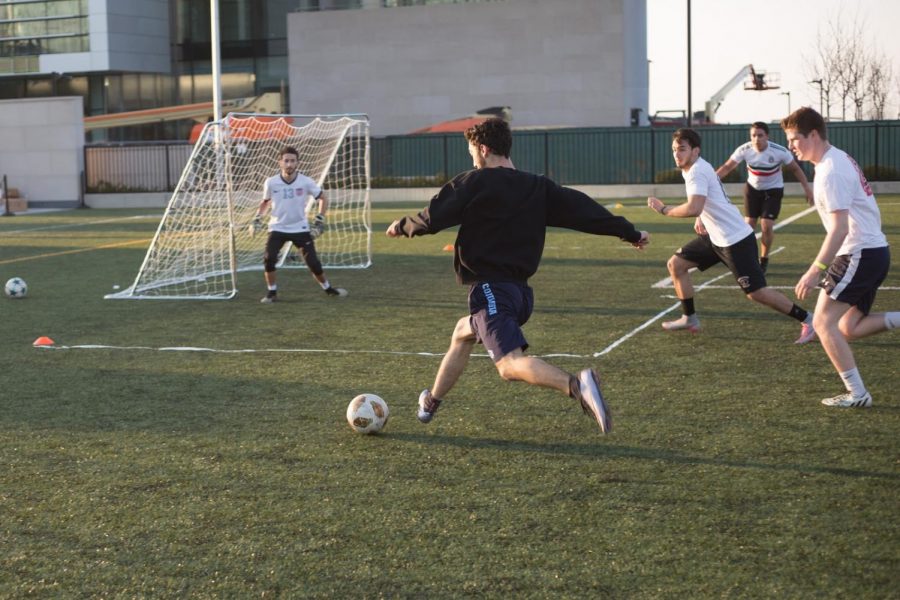 NU students compete in a group stage match during the spring tournament. First and second place teams in the group stage go on to a knockout elimination tournament to decide who will compete for the championship.

NU World Cup plans to organize the largest student-run soccer tournament on campus after its 2020 Italy tournament was canceled due to COVID-19.

Both fall events have been canceled, but the club is moving ahead to prepare for the large spring tournament and other Winter and Spring Quarter events on the presumption that all students will be able to return to campus in January.

The student group is looking for new members in all committees on their executive board, including positions for tech, events, community outreach and more. And despite the challenges of recruiting on a fully virtual campus, Kyung says it has found ways to reach a substantial number of people.

The club has had a lot of virtual interaction with students, particularly freshmen, through Wildcat Connection, ISA and the Office of International Student and Scholar Services, Kyung said.

“We’ve set up some chats and info sessions directly to freshmen students that are not in Evanston, and have been able to connect with a decent number of freshmen through those avenues,” Kyung said.

Karan Gowda, Weinberg junior and NU World Cup co-chair of events and programming, said the club’s executive board chooses a country to be the theme of the spring tournament. Prior to the tournament, they hold an event open to the student body to celebrate the culture of the country chosen and bring people together.

“Last year we had picked Italy but weren’t able to do it, but the year before was Nigeria,” Gowda said. “There was a cultural event out in Deering Meadow. We had food and there was Nigerian rapper performing…. There was pickup soccer and other stuff going on in the area.”

All of the proceeds from the spring tournament will go towards Gonzo Soccer, an organization that uses soccer as a tool to empower girls allowing them to reach their full potential.

NU World Cup looks to make a positive impact on the community — and this year is no different, Medill junior and NU World Cup games and logistics chair Carson Burton said.

Kyung believes there is a space for all students within NU World Cup and urges them to reach out about getting involved.