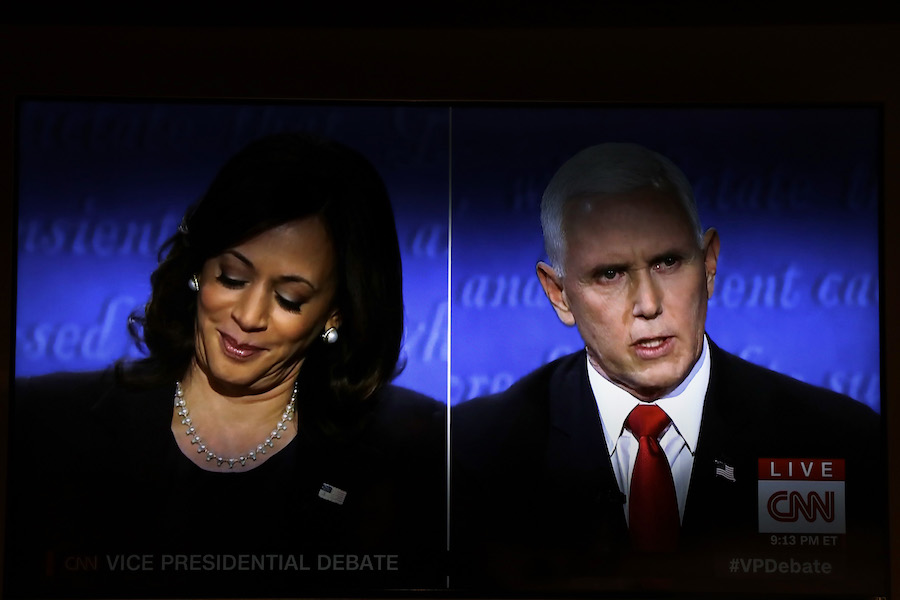 With 147 inches between their podiums and miles separating their platforms, Vice President Mike Pence and U.S. Sen. Kamala Harris (D-Calif.) debated the merits of the current administration’s coronavirus response and their running mates’ approach to climate change and racial justice.

Wednesday night’s debate between Harris and Pence took on greater importance last Friday, when President Donald Trump was hospitalized after he announced testing positive for coronavirus early that morning.

Following last week’s chaotic presidential debate, the night was marked by frequent shiftiness as both candidates tried to duck questions from USA Today Washington bureau chief Susan Page (Medill ’73). Some criticized Page for deferring to Pence, who spoke over his debate partner almost two times as much as she interrupted him, and did not always follow up on the talking points either candidate reverted back to.

“The attempt on each person’s part to broaden the question beyond what was asked, to bring in embarrassing but relevant examples, would probably be the high point each of them had,” Communication Prof. David Zarefsky said in a post-debate discussion with students and faculty.

With more than 210,000 Americans dead and 30 million having filed for unemployment as a result of the coronavirus, Harris slammed the opposing slate’s response to the pandemic, calling it the “greatest failure of any presidential administration.” Pence touted the administration’s early ban on travel from China, which he noted Biden opposed at the time.

Harris said a Biden administration would ensure that a vaccine is free for all. Pence emphasized the progress made in several vaccine trials under the administration’s Operation Warp Speed, though many health officials still don’t expect a vaccine to be readily available until spring at the earliest.

Pence also accused Harris of undermining faith in a vaccine, telling her to “stop playing politics with people’s lives” just one day after Trump announced plans to stop negotiating a new federal stimulus package until after the election, a decision he later reversed in a tweet.

Harris in turn refused to say whether or not a Biden administration would add more seats to the Supreme Court. She instead pointed out that none of Trump’s appointees to the court of appeals have been Black.

Another potential implication of Barrett’s nomination is the overturning of Roe v. Wade. While Pence declined to confirm knowledge of Barrett’s opinion on the ruling, he called himself unequivocably “pro-life” while Harris described herself as vehemently pro-choice.

Pivoting to the topic of policing and racial injustice in the United States, Page asked each candidate whether they believed justice was done in the case of Breonna Taylor, who was shot and killed by Louisville police in March. The officers currently face no indictments after being acquitted by a grand jury.

“I don’t believe so,” Harris said, adding that Taylor’s life was “taken unjustifiably and tragically and violently.”

Yet Pence said he trusted the justice system and the grand jury’s acquittal. He then transitioned into an attack on Biden’s platform, calling Biden’s past assertions that law enforcement officers hold “implicit biases against minorities” a “great insult to law enforcement.”

Harris, by contrast, delivered a list of commitments from the Biden administration on police reform — including immediately banning the use of chokeholds, requiring a national registry for police officers who break the law, abolishing private prisons and the cash bail system, and decriminalizing marijuana.

The debaters showed no caginess around the Paris climate accord, with Harris proudly stating her support for rejoining the Obama-era deal while Pence lamented the agreement, which the U.S. withdrew from under Trump.

While both candidates sought to clarify Biden’s position on the Green New Deal, the conversation quickly turned to the economy.

Though Pence repeatedly tried to pin an anti-fracking position on the Biden campaign, Harris affirmed that their administration would not ban fracking. Responding to Pence’s assessment that a Biden administration would “crush American jobs,” Harris pointed to an independent analysis that their economic plan would create 7 million more jobs than Trump’s plan.

In the first public mention of student loans this presidential debate cycle, Harris said the Biden administration would be committed to making all two-year community colleges free, providing access to free four-year public education for those making under $125,000 a year, and cutting student loans by $10,000.

Pence did not comment on the administration’s education policy, beyond saying he and Trump will “fight for school choice for all Americans.”

McCormick junior Ryan Abbott, the secretary of public relations for NU College Republicans, said he felt satisfied with Pence’s performance, noting he believed the vice president had more “factual and reasoned rebuttals” that “gave him an edge in the final tally of the debate.”

“I think the choice has become slightly clearer, but I don’t think there are any seismic shifts that will occur as a result of this debate,” Abbott said. “If anything, the impact of the debate will be to more clearly lay out the policies of the two candidates and also remind voters that there are two candidates on the ballot, and not just one.”

Weinberg senior Adam Downing, the programming director for NU College Democrats, said he thought Harris did a “fantastic job,” proving she “absolutely deserves to be the Vice President of the United States.”

“If anything, it brought a bit more confidence seeing Mike Pence get up there and just toe party lines,” Downing said. “He didn’t bring up any real policy… Instead, what he did is he dodged questions for an hour and a half, while Kamala Harris stood in the face of them and answered them correctly and brought confidence to the American people.”