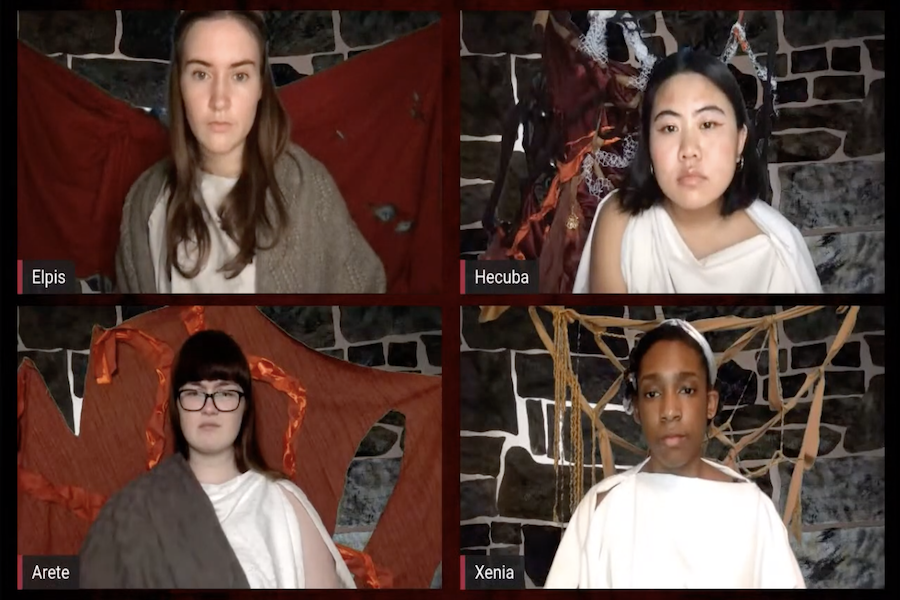 “The Trojan Women,” a classic play about a group of Trojan women following the fall of Troy, will feature the actors performing from their own residences.

When Communication sophomore Arella Flur was selected to produce a show for the student theater organization Lovers and Madmen back in May, she could not have predicted that the actors would end up performing from their own homes for a virtual show. “The Trojan Women” will be live-streamed via StreamYard on Friday and Saturday.

Flur selected Communication senior Pallas Gutierrez to direct the upcoming show, and the two chose the play “The Trojan Women.” Based on a Greek tragedy written by ancient Greek playwright Euripides, the play follows a group of Trojan women after their city was ransacked, husbands killed and remaining family members soon to be taken away as slaves.

“We were drawn to the fact that it’s one of the few Greek plays that features women in a position of authority, and the women are actually going to tell their own stories,” Flur said. “They’re not just the wives or the damsels in distress ― they are loud and they are angry and they go through a full range of emotion and character development.”

Flur added that the women also struggle to navigate a new world that does not look like anything they had known before, which is relevant to the real world today amid the COVID-19 pandemic and the ever-changing climate.

In addition to drawing attention to women in power, Gutierrez, a former Daily staffer, said an important part about the play is how it touches on the issue of finding hope “when there is almost none” and finding a path in a future where everything seems “horrible,” which was relevant in May and still is today.

“The community that the women in the play find and the moments of hope that they find are super important,” Gutierrez said. “I hope that people who come see this show take that community and hope and defiance with them into their lives.”

Flur said what differentiates “The Trojan Women” from other productions is how the team has “fully embraced the design world” of the piece, as the actors will be in full costume and makeup with the sets, lights and sounds the audience would normally get with an in-person show. The actors will be performing live from their own apartments or homes, but the show will be performed as though they were together.

“It was mostly difficult to reimagine how a lot of design elements would work ― lighting design and set design were particularly difficult because (with) costumes and props, you can mail people clothes and things, but (with) lighting and set, we had to sort of reimagine what those would look like,” Gutierrez said.

Gutierrez added that they are all excited about the team’s final design.

“The Trojan Women” has a partially virtual backdrop designed by McCormick and Communication sophomore Zoe Snead. She said, as the set designer of the show, the design element for this particular show feels “very personal” to her. After working on building pieces in her apartment and preparing green screens for people’s backgrounds, Snead sent the actors’ set pieces directly to their apartments and homes.

“I’m very excited to give this stuff to them and see how they put their character’s spin on these items because I’ve been putting so much thought into each item and going like, ‘Oh this feels like this to me’ and, ‘This exhibits this emotion’ and I just want to see how they play with that,” Snead said.

Related Stories:
— The show must go on: Theatre groups reimagine shows for virtual stage
― StuCo activities to be help remotely