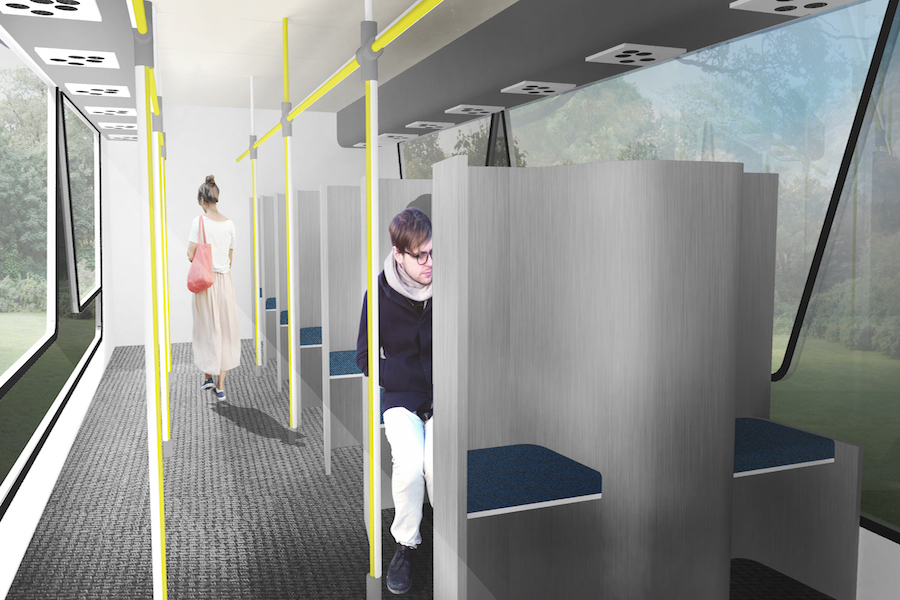 A digital rendering of the interior of Futurebus. The large side door is pictured on the left, and the plexiglass-separated alternating seats are on the right.

McCormick senior Ryan Teo participated in an international design competition in June. He was then paired up with three graduate students, and the team was tasked to create a design that celebrated community and collaboration and adhered to the theme of flowers. The team went on to win the grand prize of 50,000 Chinese yuan, or about $7,400, for their creation, “Futurebus,” a pandemic-era reimagined design of a public bus that minimizes contact between its passengers. Its key features are a large main side door which allows for passengers to embark and disembark without having to walk past one another; a fare-collection system based on long-range radio frequency identification; alternating seats separated with a plexiglass divider; and rotating hand railings that are sanitized at every stop by UV LED lights.

The Daily: How did you get involved with the FourC Challenge 24-hour Global Design Charrette Contest?

Teo: My academic advisor sent me an email about it, and I checked it out. It was a competition hosted by Shanghai Jiao Tong University, and I’m really interested in human-centered design in China, having lived there for four years growing up.

The Daily: What was the format of the competition like?

Teo: It was one day, 24 hours straight. I don’t know if they expected us to sleep, but we didn’t, and I know a lot of other teams didn’t either… After the (keynote) speeches, they split us up into teams, and from there, it was just go — you have 24 hours starting from now, in 24 hours we will be presenting the judges. So we didn’t have much time to get to know each other, but I really got to know them through their work ethic and just how we work together.

The Daily: So what made your team choose to create a public transport design?

Teo: None of us are automotive or transportation designers, but I think (Futurebus is) just (a) testament to the power of human-centered design. Human-centered design is all about understanding people, and once you understand people to a deep enough level that you empathize with them, you have an idea of their problems and then how to solve them…I did a bunch of interviews towards the beginning of this design process… and I found that people — at least a couple of months ago — were most afraid of going back on public transport as things start to open up… So we decided to tackle public transport just based on some of the interviews that we collected.

The Daily: What is one of the sources of inspiration of Futurebus’s design?

Teo: The last feature we came up with was inspired by (the) Chicago O’Hare Airport toilet seat. The seat kind of has a plastic wrap that rotates, and so no two people ever sit on the same piece of plastic, so we kind of had that similar idea for railings handrails in the bus and… on the back has a strip of UV LEDs. Every time the bus stops, the handrail will rotate 360 degrees and essentially sterilize all of its surface.

The Daily: What kind of implications does your design hold for the public?

Teo: Where we landed was a couple of models and final renders, so all CGI. We never prototyped anything, partly because it was 24 hours, but also because none of us are automotive designers; all we did was apply the human centered design process to this automotive space. And our result was this radical blue-sky idea. I don’t think we could actually build this bus within the next one or two years, but it more and more serves as inspiration for automotive designers and also for public health officials, transport officials to think about ways in which they can pandemic proof their future.