Wildcats in Europe: Abbie Wolf and Pallas Kunaiyi-Akpanah talk about the transition to basketball in a new continent 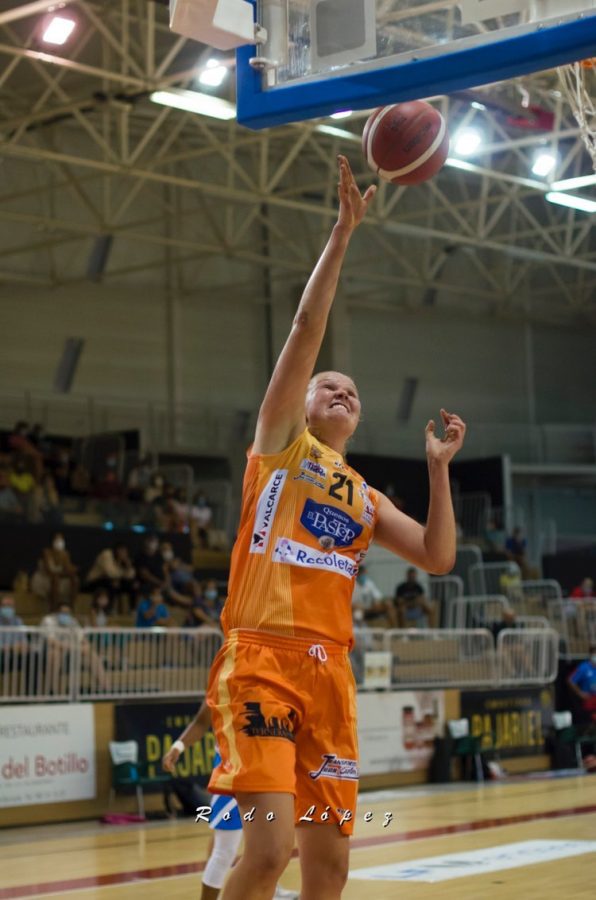 In one of her first games wearing the CD Zamarat jersey, former Northwestern center Abbie Wolf shoots a layup by the paint.

When Abbie Wolf looked up Zamora, Spain for the first time, she thought it would be a tiny town, “with a bunch of churches like the 1300’s.” She’d never been before, but was set to sign her first professional contract there after a four-year collegiate basketball career at Northwestern.

What she found instead was a city — about 62,000 people call Zamora home — that in 1072 bore witness to the assassination of the Spanish king of Castile, Sancho II. Now, a vibrant and cosmopolitan plaza mayor marks Zamora’s center — and it’s the first place Wolf and her teammates went after getting to Spain.

“I don’t use my GPS everywhere I go, so I guess I know my way around. I have my coffee shop now. It’s starting to feel like home,” Wolf said. “Northwestern will always be home, but this will be a good substitute for now.”

Wolf chose to play in the Spanish league last spring primarily because she learned the language in school and has a cousin who lives two and a half hours southeast in Madrid.

By April, after signing with a Spanish agent, she’d received and signed a contract offer to play for Club Deportivo Zamarat in the Liga Femenina Endesa. The team announced her signing in June.

“Her physical power, together with her power of intimidation and intensity of play and the speed of her actions, will make her one of the references of Quesos el Pastor for the next season in the Endesa League,” the team said in a press release.

Wolf got to Spain in August and has spent the last few months noticing the differences between American and European styles of basketball.

In Europe, games are faster with more finesse, and there’s less physicality and scouting, she said.

“I was like, ‘Wow, I’m taking the court as a professional basketball player. This is legit,’” Wolf said. “Over here they play a little faster and shoot more threes… (But) it’s still obviously the game of basketball.”

However, COVID-19 has complicated her basketball routine. Wolf’s first stop when she touched down in Spain was to a clinic for a PCR test. The team facility has shut down twice because of potential outbreaks. Players can only access the weight rooms and training centers at specifically designated times.

But she’s still finding a way to practice — by playing in parks.

Pallas Kunaiyi-Akpanah — a skilled center for Northwestern from 2015 through 2019 — also knows what it’s like to have a career reshaped by COVID-19. She was playing for Pallacanestro Vigarano in Italy when the virus struck there.

Kunaiyi-Akpanah played just 20 games in Italy, but averaged 8.3 points and 15.7 rebounds per game, making 5 starts. Still, the pandemic forced Kunaiyi-Akpanah to wonder if she’d ever play in Europe again, she said. Now, she plays in the Belgian league at Basket Namur Capitale.

“Going into my second season, I was worried for sure because I felt like if this COVID thing is gonna go on, am I even going to be able to travel, am I going to have to wait?” Kunaiyi-Akpanah said. “Getting the visa to come to Belgium was a whole other debacle because everywhere was closed. I’m just grateful that I’m here, I’m happy to be here. It’s gonna be a great season.”

Kunaiyi-Akpanah remembers being in Wolf’s position. Just a year ago, she was the rookie —- experiencing European basketball for the first time, getting used to the independence and accountability of the professional level.

“I’ve never been there before, I’d never spoken the language before — everything was just new,” she said. “Especially coming from Northwestern, from home. The (Belgian) team was really helpful in that whole process.”