Football Notebook: How Andrew Marty is trying to win the starting role 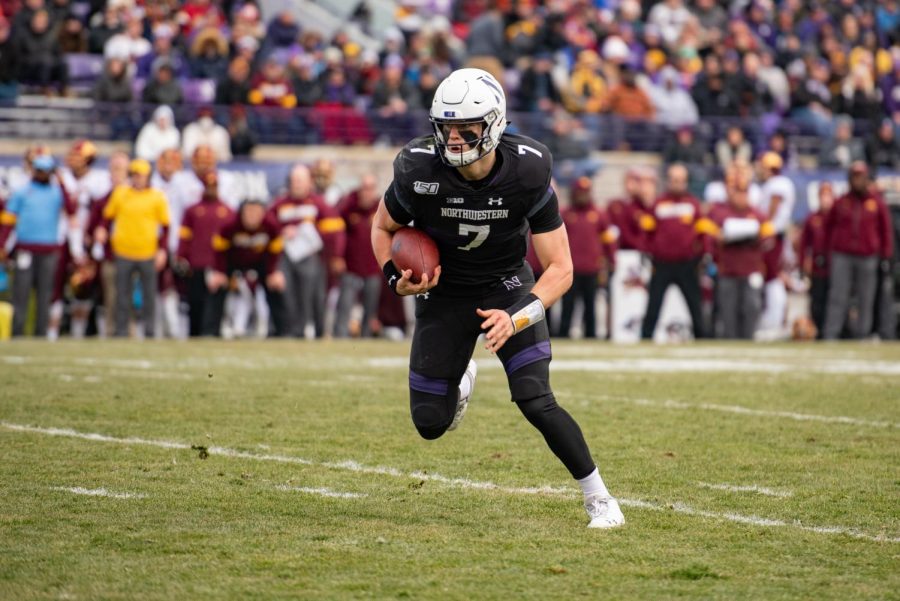 Andrew Marty takes off with the ball in a Nov. 2019 matchup against Minnesota at Ryan Field

As he has for the last three training camps, senior Andrew Marty is heading into the summer with no real idea of where he sits on the quarterback depth chart. But for the first time, the Cincinnati native knows he’s in the running for serious game time.

This time last year, he was behind the struggling duo of Hunter Johnson and Aidan Smith. Since then, Marty has made his NCAA debut, and first start, the later in which he rushed for 111 yards and two scores along with a passing touchdown in a 29-10 defeat over Illinois. Things are different now.

“I said it after the Illinois game, I was going to put a perspective in my head that I was going to be the starting quarterback heading into the offseason,” Marty said. “I really owned that and wanted to build on that.”

He’s busy training for the upcoming season, engaging with fellow quarterback Peyton Ramsey about the Cincinnati Bengals and playing out his role in Northwestern’s offensive picture. And he’s learning a new brand of offense under Mike Bajakian, building on his arm strength and buying into a season set to be played without fans in the stands.

“Every year I’ve been faced with some kind of quarterback competition,” Marty said. “Separation of reps, I don’t really handle it. I’ve loved working with our guys. This new offense is super fun. It’s exciting stuff. But in terms of reps, you can ask Coach about that one, but I really let him handle that stuff.”

Senior linebackers Blake Gallagher, Paddy Fisher and Chris Bergin have spent their entire NU careers playing together. They’re the stalwarts of the defense, and last year combined for 127 solo tackles and 17 tackles for loss.

“That bond that we’ve built over these past couple of years is huge, especially in a weird year like this,” Gallagher said. “We’re kind of all on the same page. We’ve been out there, we’ve had the experience with each other, we kind of know what each other’s gonna do. We can play off of each other.”

The trio leads a defense that struggled to make game changing plays. Last year, the Cats compiled just seven interceptions, down from 12 the year prior. After forcing 15 fumbles in 2018, NU recorded just 10 last season.

Gallagher said the defense is focusing on recovering those disruptive tendencies. They’ve found new drills to sharpen their skills and are preaching a hungrier mentality.

“Our goal is to be the best defense in the Big Ten,” Gallagher said. “We set out goals every year for our linebackers to be the most physical linebacking corps in the Big Ten and that hasn’t changed in our time here. That’s what we’re gonna go out and try to do this year again. Just pride ourselves on stopping the run.”

Almost 200 schools each nominated one athlete for consideration. In a statement on Twitter, the program congratulated Gillikin on “balancing Big Ten Football and Feinberg Med School.”

In November, NFF will announce 12 to 14 finalists, with each receiving $18,000 in scholarships earmarked for postgraduate education. Later, one member of the class will be chosen as the winner, with their postgraduate scholarship increased to $25,000.

This is the third straight year Northwestern is grappling with the medical retirements of players expected to be in the rotation. Both James and Stovall were set to see significant increases in playing time and responsibility.

The loss of Stovall is an especially acute blow to an offensive line that’s already seen star lineman Rashawn Slater opt out to prepare for the NFL Draft. Stovall played in nine games last year and was expected to start this fall.