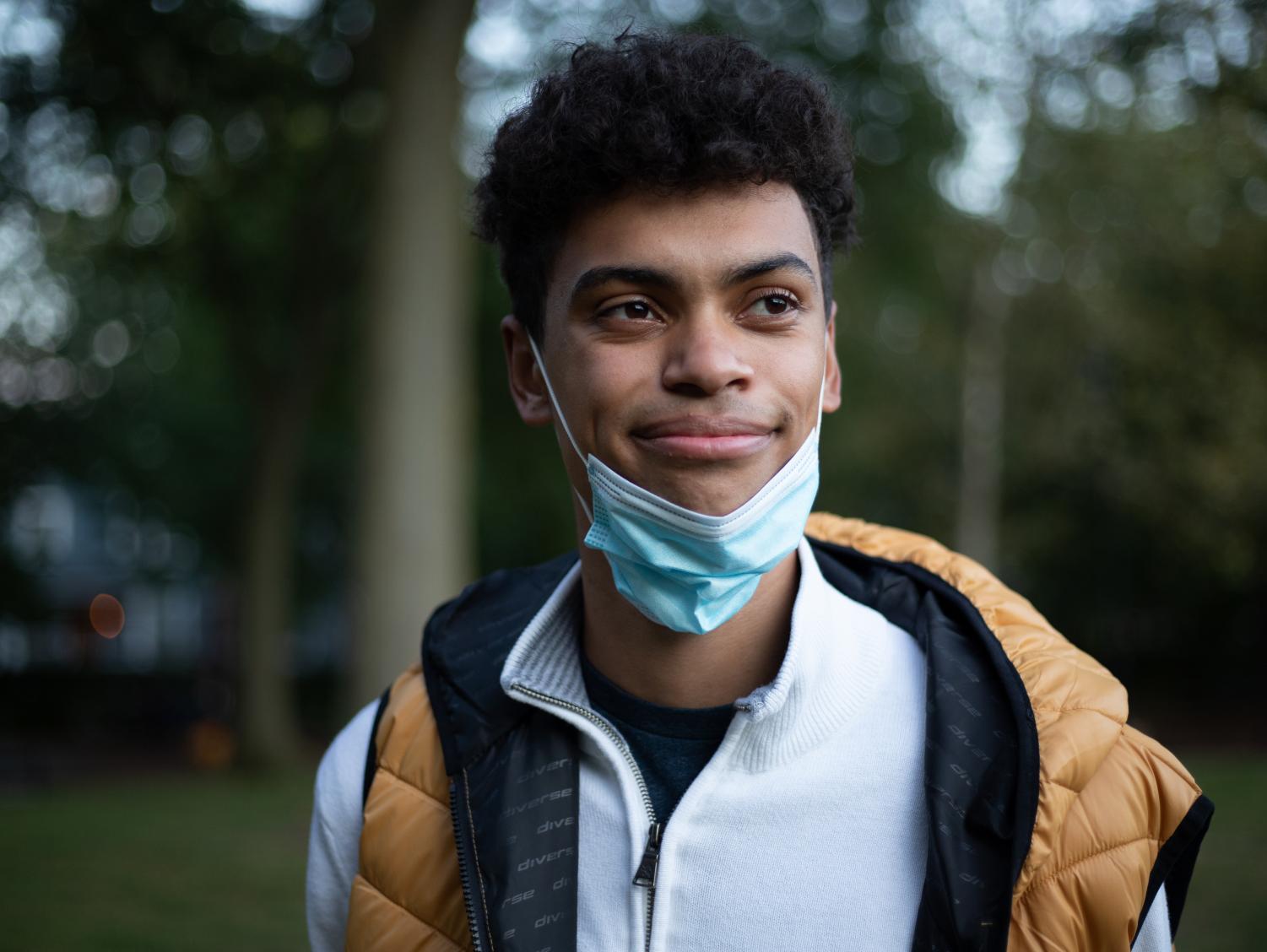 Sebastian Nalls. The 2018 ETHS graduate is running for Evanston mayor.

“That’s who we are as Evanston”: Mayoral candidate Sebastian Nalls hopes to build community, inclusivity if elected

Sebastian Nalls said the moment he knew he would run to be the Mayor of Evanston was last year, when the city was in the process of funding and rebuilding the Robert Crown Community Center.

Nalls has lived in Evanston for most of his life and grew up in the city’s 9th Ward — right near the Community Center. He attended preschool and multiple summer programs at Robert Crown, and said many minority families use the facilities for their children as well.

However, in the funding process, the city struck a deal with Beacon Academy, a local private school, to guarantee $500,000 in donations in exchange for access to the center’s new gymnasium during after school hours. Though the deal eventually fell through, Nalls said it was concerning to him that the city would even entertain the possibility of exclusive access based on funding.

“People of color, this is their only place to actually go and use the recreation facilities,” Nalls said. “I was working for the city of Evanston at the time, and we pride ourselves on fighting for equality and listening to our neighbors and being there for each other. But then we do something like this that actively counters those narratives.”

So Nalls knew he had to try to make a difference.

Nalls, a 2018 Evanston Township High School graduate and current junior at Purdue University, announced his mayoral candidacy on August 29. Since then, former State Senator and gubernatorial candidate Daniel Biss announced his plans to run. Current mayor Steve Hagerty has not yet said whether he plans to run for another term.

Nalls said despite the possibility of notable candidates running against him, he remains unconcerned about his competition. As a young person with personal experiences with issues like policing and COVID-19, he said he is uniquely situated to bring a fresh perspective to the mayoral office.

“Every single generation has their turning point, and there are issues that are brought to the table that need to be solved,” Nalls said. “My generation has hit that turning point — there are issues on the table here in the city of Evanston that need to be solved, and we need to address those issues in a timely manner because they impact everyone in the city on a daily basis.”

A “natural leader” since childhood

Susan Ye moved to Evanston with her family 15 years ago, and she first met Nalls’ family on Halloween of that same year. Nalls was a child when Ye met him, but she said she remembered his kindness.

From a young age, Nalls would help coordinate the block parties that his neighborhood hosted, and he worked to make sure other kids felt included, Ye said.

“Even as a kid, Sebastian was a natural leader — he’d help organize and do activities for the little ones, like my son and his brother,” Ye said. “Progressively, he’d build to even coordinating one of the block parties a few years later. And there were exchange students at the high school that year and he included them in this so they could have that experience as well.”

Beyond the block parties, Nalls has continually been involved in the Evanston community. Ye said she has seen him participate in events like neighborhood cleanups and ward meetings.

Additionally, Nalls said he has worked for the city’s Parks and Recreation department for the past six summers, including leading two of the department’s summer programs the past two years. Ye said Nalls’ high level of community involvement sets him apart from other potential candidates.

“It’s important to know who you’re mayor for — who are your communities, what are their needs and concerns and who are they as people?” Ye said. “Being out there and present, not just at a parade, but at times when people need help and support, is very important.”

Making a difference from the sidelines

In high school, Nalls was a member of the ETHS basketball team. His senior year, he served as the team’s manager, a job he continued with the Purdue basketball team when he went to college.

Rudy Meo, one of the team’s assistant coaches, said Nalls always carried himself differently from the other team members, but one moment during his senior year showed the impact Nalls could have on those around him.

It was the end of the season, and the team had made it to the state-wide final four. The team was losing, Meo said, so Nalls gave a motivational speech.

“When he spoke, you could just feel it and hear it in his voice, the power he had,” Meo said. “That was a moment that I’ll always remember. It’s typically either captains or coaches who will try to help motivate and inspire guys, but this was different. Out of the years that I’ve been coaching, I’ve never had a manager be able to step up and say those things.”

As the team manager, Nalls was always the first to volunteer at events like youth camps and mentor the team’s younger members, Meo recalled.

Since graduation, Meo said Nalls has returned to visit the team multiple times, having conversations with younger players he mentored and helping coaches in any way he can. Nalls’ younger brother is a member of the current team, and Meo said that has also strengthened Nalls’ commitment to supporting them.

“For Sebastian to be a manager and return, we haven’t had many managers, probably very few, who would come back and still lend a hand if needed,” Meo said. “So that says a lot about his character as well.”

As a current college student, Nalls said many residents might question his capability to run the city. However, he is committed to moving back to Evanston to fulfill his mayoral duties if elected, and will finish his education remotely. The time commitment is no different from many previous mayors who have balanced a full-time job with their leadership positions, he said.

Additionally, Nalls will commit to an open-door policy if elected, holding consistent community meetings to get residents’ input on issues that matter to them, he said.

Cheryl Lackey, an Evanston resident who has known Nalls for years, said she trusts him to prioritize residents’ needs over other pressures he may face as mayor.

“I’ve seen him in situations where he’s had to make a decision that wasn’t always the most popular one,” Lackey said. “But he made a decision for what’s right. So I think Sebastian would be a mayor that would serve the entire community.”

Nalls said his dedication to engaging with the community during the school year is a testament to his commitment to the city. He wants to travel the world, but he always imagines himself returning back to Evanston, his home.

Evanston’s atmosphere is unlike any other city he’s been to, Nalls said, and he hopes to be able to bring about positive city-wide change if elected.

“We have the possibility here in Evanston to create things that exist in no other city in America,” Nalls said. “We have the possibility to lead every other city when it comes to issues like racial equality and environmental stability, and I think we should be taking that responsibility with open arms. At the end of the day, that’s who we are as Evanston. That’s a responsibility and we’ve got to get it done.”