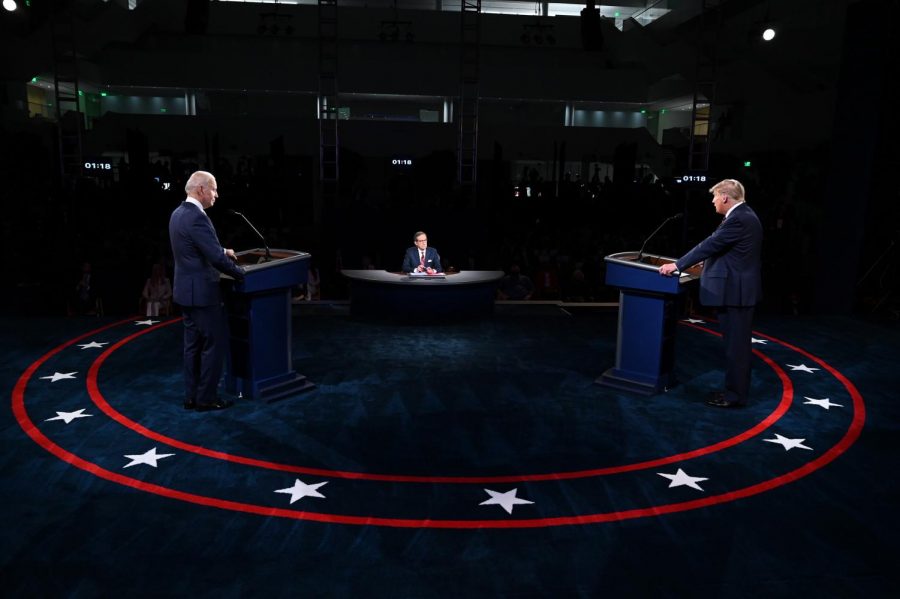 President Donald Trump did not commit to withholding a declaration of victory until an independent commission had confirmed the results of this November’s presidential election on Tuesday night.

The first presidential debate between the incumbent Trump and former Vice President Joe Biden, moderated by Fox News anchor Chris Wallace, was marked by frequent appeals to the American people from Biden and incessant interruptions from Trump.

“A reporter earlier in the day asked me if I thought that this debate would be more like a debate or more like a spectacle,” Communication Prof. David Zarefsky said. “I said spectacle, so I think I got that prediction right.”

With recent polls showing the president down by nearly double digits nationally and behind in crucial battleground states like Wisconsin and Pennsylvania, Trump sowed doubt in the election’s integrity, calling it a “fraud like you’ve never seen.” When asked the same question, Biden refuted the claim that counting mail-in ballots is a fraudulent process, warning that ballots will “take time” to count.

“If it’s a fair election, I am 100 percent on board,” Trump said. “But if I see tens of thousands of ballots being manipulated, I can’t go along with that.” However, The Washington Post found a “miniscule” number of possible fraudulent ballots in states with universal mail-in voting.

The argument over ballot counting, coming in the debate’s final minutes, was indicative of a night that featured two completely different visions of the country’s last four and next four years. Trump, who admitted to disagreeing with his own scientists, painted a picture of a country that is weeks away from a vaccine for COVID-19, which has now killed over 200,000 Americans. Health officials have said any vaccine would likely be unavailable until next year.

Trump refused to condemn white supremacists when prompted, instead calling on the Proud Boys — viewed by many as a far-right extremist group — to “stand back and stand by.”

The debate also came after a historic summer featuring over 100 straight days of protests for racial justice in Portland and across the country, many of which included calls for defunding the police.

On Tuesday night, Biden lamented police brutality as an issue resulting from “some bad apples in the police department.” His administration, he said, would convene a group of civil rights advocates and police chiefs to find solutions that would hold officers accountable. Barraged by accusations of being against “law and order” and reminders that he authored a 1994 crime bill that many criminal justice advocates say contributed to mass incarceration, Biden also condemned violent protests.

The night opened with Trump affirming his right to nominate Amy Coney Barrett — a conservative jurist who has voiced opposition to Roe v. Wade and the Affordable Care Act — to the Supreme Court, stating, “I’m not elected for three years, I’m elected for four.”

Biden fought the assertion, citing the political nature and policy implications of Barrett’s confirmation. Highlighting Barrett’s position that the Affordable Care Act is unconstitutional, Biden argued her addition to the bench would almost certainly lead to the act being overturned by the Supreme Court, putting almost 30 million people at risk of losing their health insurance coverage.

Repealing the Affordable Care Act was a central part of Trump’s 2016 campaign — and a promise that went unfulfilled despite Republican control of both congressional chambers for two years.

“The American people have a right to have a say in who the Supreme Court nominee is… they’re not gonna get that chance now because we’re in the middle of an election already,” Biden said.

Talk of specific policy plans took up only a fraction of the debate, and the issue of climate change took up even less. Trump evaded confirming whether he believed in the science of climate change, instead blaming recent wildfires in the West Coast on forest mismanagement and touting the economic benefit of his withdrawal from the Paris Climate Accord.

“I haven’t destroyed our businesses,” Trump said. “Our businesses aren’t put out of commission. If you look at the Paris Accord, it was a disaster from our standpoint. And people are actually very happy about what’s going on because our businesses are doing well.”

Biden affirmed he would rejoin the accord, but stated he did not support the Green New Deal, instead defending his own $2 trillion plan to escalate the use of clean energy and achieve an emissions-free power sector by 2035. The plan includes economic incentives for businesses, investment in climate research and innovation and the upgrade of four million buildings over four years to meet the highest standards for energy efficiency.

“In a messy first debate, President Trump began strong and offered compelling arguments on the key issues of the debate — his positions on SCOTUS, Law and Order, and the economy revealed the would-be weaknesses in a Harris-Biden Administration,” the group stated.

Weinberg senior Adam Downing, the programming director for NU College Democrats, urged students to vote be it via absentee ballot or in-person.

For Downing, the debate showed that Biden is the right candidate to serve as president.

“If you look at who responded with poise and who responded with intelligent, factual-based answers, versus just rhetoric and fluff and lies, Joe Biden comes out not only the winner of the debate but clearly the man for the next president of the United States,” Downing said.

But the two groups’ respective confidence in the candidate’s performances went largely unreflected in a Zoom debate watch party for student members of various residential colleges.

For many, including Communication freshman Jordan Muhammad, the debate was disillusioning, and had little influence on whom they plan to vote for by November.

“I was not super impressed,” Muhammad said. “I’m not at all more excited by looking at the course of disrespect from both sides. I wasn’t impressed by very much of the content, and I’m not really looking forward to the future. So if anything, I’m demoralized, but nothing much has changed.”

— Candidates clash over gun control, public education in third round of debates