Fine: Rhetoric and the inclusion of women in STEM 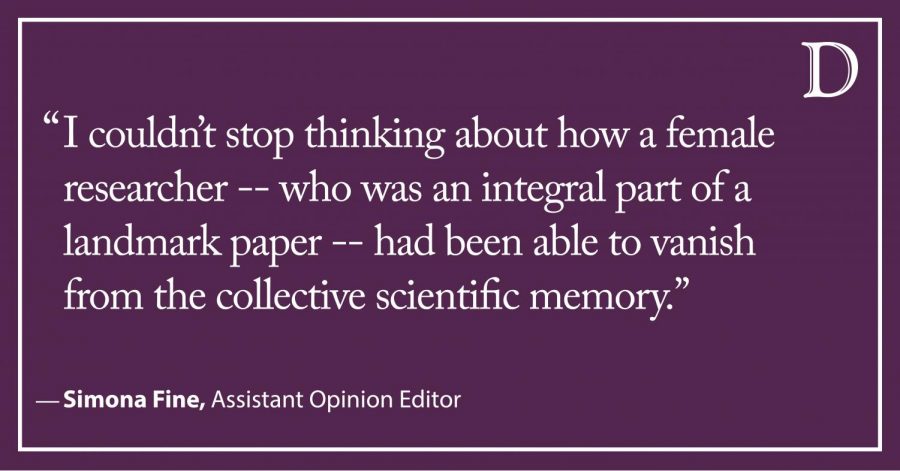 In 1947, American metallurgist Ernest Kirkendall controversially published his third and final paper accompanied by pages of discussion written by preeminent scientists doubting his results. Kirkendall’s thesis research kicked off a years-long battle over the veracity of his work, but once his discoveries were accepted in 1950, they changed the field of materials science forever.

As we studied Kirkendall’s observation in class, which has since been named the “Kirkendall Effect,” my professor also told us this last paper was co-authored by Alice Smigelskas, an undergraduate student in his lab, attempting to prove to us that undergraduates could perform groundbreaking work. She ended this conversation revealing that when she tried to look Smigelskas up, no more information about Smigelskas’s research or contributions could be found after her marriage.

While the story about Smigelskas was meant to inspire us, I couldn’t stop thinking about how a female researcher — who was an integral part of a landmark paper — had been able to vanish from the collective scientific memory.  As one of only four women in the class, it felt like that could uniquely be my future, while my classmates may have been remembered for their work.

Recent hiring decisions in the materials science & engineering department have prompted a series of discussions about the lack of underrepresented populations in the major. I attended two of these diversity and inclusion meetings, one with the lab group I work for and the other with a combined group of undergraduate and graduate students.

Despite being one of two women in my year in the major, I haven’t had explicit issues with sexism specifically within materials science. While I often feel isolated or scared of speaking up during a class lecture related to my major, I attribute these tendencies to my experiences in general engineering spaces. Some reflection reminded me of moments where I reacted differently to my male classmates because of my position as a woman in the class.  Both were instances where professors were clearly not motivated by any form of prejudice, but used language in a way that surprised and alienated me.

During Winter Quarter, one of my professors began speaking about academic lineages, constructed by analogizing your Ph.D. advisor to a parent and the advisor of your advisor to a grandparent. However, instead of using a gender-neutral term, he referred to the Ph.D. advisor as an academic daddy. As he flipped through photos of white men he termed as academic daddies or grandaddies, the blatant use of such explicitly gendered language made me feel excluded. To stare at the screen upon which no women were depicted was isolating enough, but the masculine terminology accompanying it seemed to solidify that this was an ostracizing space in which I was unwelcome.

As an English major, I am taught to close read, to think about why authors chose the words they choose, and how these terms enhance or detract from their argument. If engineers want to promote a more inclusive environment, they must also use rhetoric to their advantage and harness its power for the creation of an embracing space. In order to construct a more comprehensive narrative of what identities people in STEM can hold, professors need to think about the words they use and what those expressions may unintentionally reveal. Small edits to the transcripts of my professors’ stories could drastically change the meaning and perception of their words, especially for students who aren’t straight white men.

The world of materials science is progressing and integrating, and if we’ve really moved past the era in which female researchers could vanish into thin air after marriage, then we need to evolve our language to accompany this shift in culture.

Fine is a McCormick junior. She can be contacted at [email protected]. If you would like to respond publicly to this op-ed, send a Letter to the Editor to [email protected]. The views expressed in this piece do not necessarily reflect the views of all staff members of The Daily Northwestern.