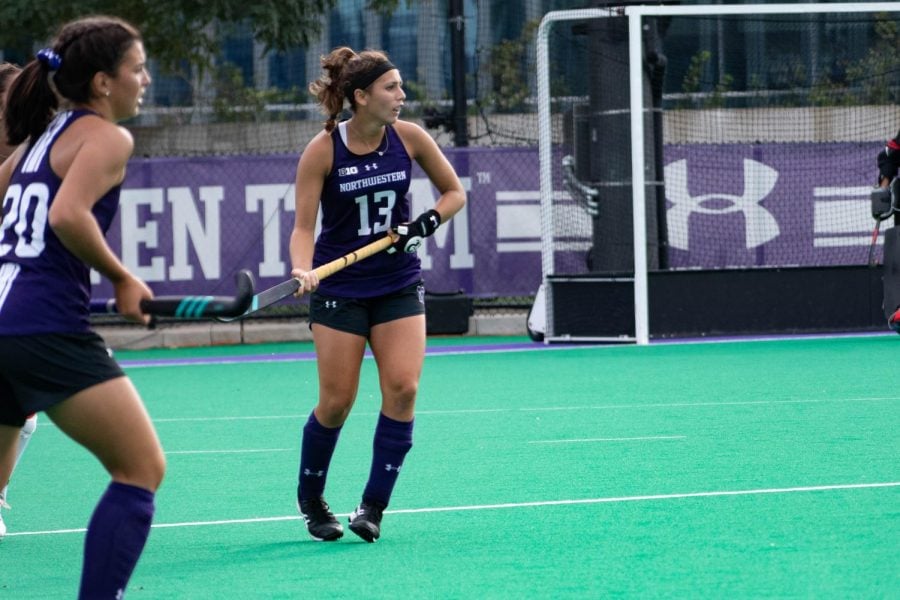 Lily Gandhi (13) stares down the opposing team. The senior concluded her Northwestern career by scoring a goal on Senior Day in the Wildcats’ 6-0 win over Indiana last year — in one of the more memorable games of the fall.

In any other year, the fall sports season would be well underway, with Northwestern teams working towards Big Ten titles and winning seasons.

But this fall, the COVID-19 pandemic has prevented Wildcat squads from taking fields, pitches and courts. Although NU football is slated to return in late October, there has been no announcement about the Cats’ other fall sports, including men’s and women’s soccer, field hockey, cross country and volleyball.

Last season, each of these programs had special moments, from postseason berths to last-second victories. While we aren’t able to watch them right now, we can look back at the top moments from each of these teams in 2019.

September 29, 2019: Women’s Soccer beats Iowa for second straight victory
After winning only two games during the first month of the season, Northwestern secured their first conference victory against Nebraska in late September. Three days later, the Wildcats played one of the hottest teams in the Big Ten: Iowa. In Iowa City, NU was outplayed early by the 10-1 Hawkeyes, but the Cats struck first with freshman defender Reilly Riggs sending a header into the net for her first career goal. Despite Iowa tying the game in the 38th minute, NU held strong and forced overtime, where fellow freshman defender Danika Austin joined Riggs in scoring her first career goal. With their 2-1 victory, NU won their fifth consecutive match against Iowa. The win marked the first time the Cats won back-to-back conference road games since 2015.

October 25, 2019: Men’s Soccer defeats Michigan State on last-second goal
Coming off a 2-0 win against Rutgers, Northwestern needed a victory under the lights against Michigan State to stay in contention for home field in the Big Ten Quarterfinals. It took all 90 minutes, but the Wildcats got the job done. With 45 seconds left, sophomore forward Jose Del Valle received the ball on a throw-in and flicked it to the right side of the goal. Senior midfielder Matt Moderwell ran to the spot and sent a shot past Spartan goalie Hunter Morse for his fourth goal of the season. With their Homecoming win, the Cats moved up to fifth in the Big Ten and won back-to-back conference games for the first time since 2014.

October 29, 2019: Cross Country places fifth at NCAA Pre-Nationals
After lackluster finishes at their previous four meets, Northwestern had their best race of the 2019 season at the NCAA Pre-Nationals. In Terre Haute, Indiana, the Wildcats participated in the slower of the meet’s two heats and placed fifth out of 26 teams. Sophomore Rachel McCardell finished in 14th with a time of 21:24.3, while senior Kelly O’Brien came in 26th with a time of 21:47.4. Additionally, senior Sarah Nicholson concluded her race at 21:53.0 , good for 30th place. With three top-30 finishes, NU got a great momentum boost in anticipation of the Big Ten Championships.

November 3, 2019: Field Hockey shines on Senior Day, defeats Indiana 6-0
Following a 2-1 loss to No. 8 Iowa, No. 11 Northwestern faced Indiana on Senior Day. The Wildcats had defeated the squad during the previous two seasons. The trend continued for a third straight campaign, as NU beat the Hoosiers by six goals at Lakeside Field. Freshman Bente Baekers, who was named Big Ten Freshman of the Year, led the way with two goals as the Cats got their sixth shutout of 2019. The Friday afternoon was particularly special for the team’s seven seniors. Not only did the fourth-years receive an honorary pregame ceremony, but three of them — Lily Gandhi, Saar de Breij and Kirsten Mansfield — also scored a goal.

November 30, 2019: Volleyball upsets No. 17 Illinois on Senior Night
The 2019 season was not an easy one for NU. In addition to losing their first 10 conference games, star freshman outside hitter Temi Thomas-Ailara missed matches with an injury. With a 4-15 conference record, the Wildcats headed into their Senior Night matchup at Welsh-Ryan Arena against No. 17 Illinois — who defeated NU three days earlier — as huge underdogs. However, the Cats saved their best performance for last. NU defeated the Fighting Illini 3-1, outnumbering their in-state rival in kills, aces, blocks, assists and digs. Junior outside hitter Nia Robinson earned 22 kills and 13 digs, while Thomas-Ailara notched 17 kills. The Cats’ upset of Illinois was their only victory against a ranked team last fall.