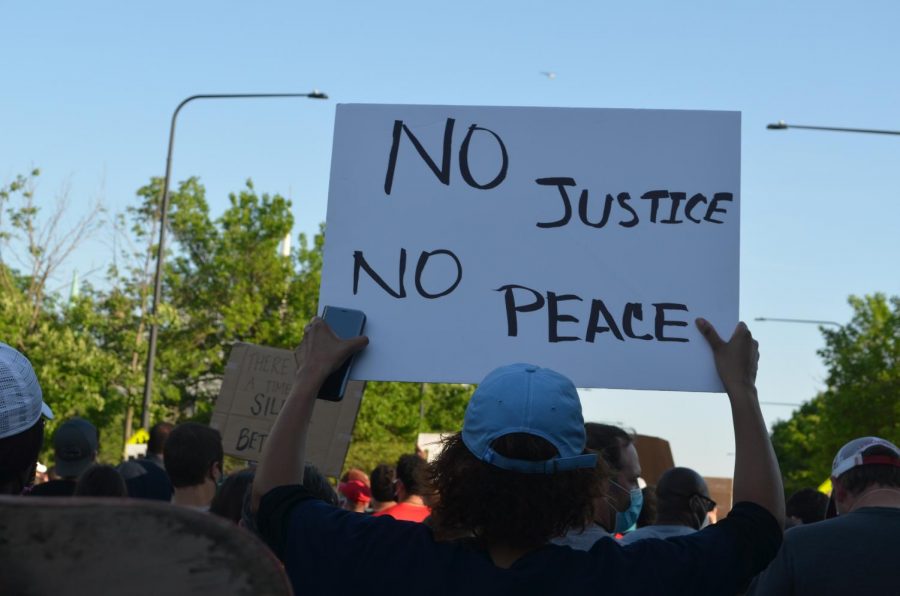 A protester holds up a sign on June 14, 2020 on S Martin Luther King Jr. Drive in Chicago. Protests calling for racial justice and an end to abusive policing have spread nationwide in response to the killings of George Floyd, Breonna Taylor and many others at the hands of the police.

On Wednesday — over six months after police shot 26-year-old Breonna Taylor in her own home — a Louisville grand jury came to a decision. Former Louisville detective Brett Hankinson was charged with wanton endangerment for his actions during the raid, but did not face charges directly related to her death.

This decision came on the 45th anniversary of the day two White men from Mississsippi were acquitted following the murder of Emmett Till, a Black teenager from Chicago. In a news release, political science Prof. Alvin Tillery, Jr. reflected on the decision.

“The failure to indict the officers who killed Breonna Taylor after bursting into her apartment in March shows how difficult it is to hold police officers accountable for their misconduct and poor performance in cases that involve deadly force,” he said.

What happened in Louisville

In March, Louisville police officers used a battering ram to enter Taylor’s home on a search warrant. The investigation actually concerned two men the police believed were selling drugs from a house far from Taylor’s apartment. However, a judge issued the warrant believing Taylor’s apartment was being used by one of the men, who she had previously dated, to receive drug packages. Her family’s lawyer said she had recently severed ties with this man.

When the police arrived, Taylor and her boyfriend Kenneth Walker were in bed. They got up when they heard loud banging on the door, Walker said. He later told the police he feared it was Taylor’s ex-boyfriend attempting to break in and acted in “self defense,” according to the New York Times.

After the police broke down the door, Walker fired one gunshot, striking an officer in the thigh. The police responded with several shots, striking Taylor at least five times.

It was not until five minutes after the shooting that on-site emergency personnel realized the severity of her injuries, after Walker called 911, the Times reported. The Courier Journal cited dispatch logs saying it took over 20 minutes for Taylor to receive medical attention.

“For more than 20 minutes after Taylor was fatally shot at approximately 12:43 a.m. by Louisville officers, the 26-year-old emergency room technician lay where she fell in her hallway, receiving no medical attention,” The Courier reported.

Taylor was an emergency room technician and aspiring nurse. Her family is being represented by civil rights attorney Benjamin Crump, who has also represented the families of both George Floyd and Jacob Blake, who had been victims of police violence.

An FBI investigation into Taylor’s case is ongoing.

As anti-policing protests spread nationwide, Taylor was at the center

Following the killing of George Floyd by Minneapolis police, protests surged globally and nationwide demanding racial justice. Many of these protests demanded a revamping of the justice system, calling for moves such as defunding the police or, in some cases, completely abolishing the American system of prisons and policing.

Taylor’s death was a centerpiece of these protests. Calls to “Say her name” were met with a collective “Breonna Taylor.” Protesters held signs saying “Justice for Breonna Taylor” and petitions to “arrest the killers of Breonna Taylor” circulated online, garnering millions of signatures.

Yet the grand jury ruled no indictments directly related to her death against the officers who shot her. In the news release, Tillery reflected on this decision, calling it a “watershed moment for the Black Lives Matter movement.”

“For more than three months we have seen activists organizing mostly peaceful, disciplined protests demanding charges against the officers in the case,” he said. “What today showed is that protests are not going to be enough to generate accountability in such a badly broken system.”

Tillery stressed political organizing and voting as crucial next steps to changing “the environment in Kentucky.”

Kentucky Attorney General Daniel Cameron announced the jury’s decision Wednesday, emphasizing the tragedy of her death while also undercutting how under the law, the jury found the officers justified in their use of force.

Cameron, Kentucky’s first Black attorney general, has called himself a “proud Republican and supporter of President Donald J. Trump,” and is currently on Trump’s shortlist for a seat on the Supreme Court, according to the Associated Press.

A “myth of racial progress”

This ruling comes alongside a recently released study by Kellogg Prof. Ivuoma Onyeador showing many White Americans hold “a far more optimistic view of the racial progress that has been made since the 1960s” than is the reality, according to a news release.

The study showed that in 2016, a Black family had $10 in wealth on average for every $100 in wealth a White family had. But White Americans, on average, thought it was about $70.

Onyeador said in the news release that many factors may be at play that cause a perception gap about how systemic racism affects outcomes for Black Americans and non-Black people of color.

“These include a belief in a just world, the myth of racial progress, and the perception created in the media and our national discourse of high-status Black individuals who may not reflect the economic condition of most Black Americans in the real world,” Onyeador said.

This explains how policy proposals directed at combating racial inequalities often fall short of what is needed, she added.

And just as policies to ease racial inequities are falling short, Pritzker Prof. Sheila Bedi said it’s ironic to look to our current justice system, one in which criminal prosecution perpetuates oppression, for solace amid the rampant tragedies of Black death at the hands of police.

“Criminal prosecution alone will do nothing to shift the culture of fear, hatred and oppression that allows these race-based killings to happen over and over and over again,” Bedi wrote in an Op-Ed for the Huffington Post. ”There’s a deep, terrible, tragic irony here — that we have to look to the very system that was an accomplice to these killings for relief — for some facsimile of justice.”