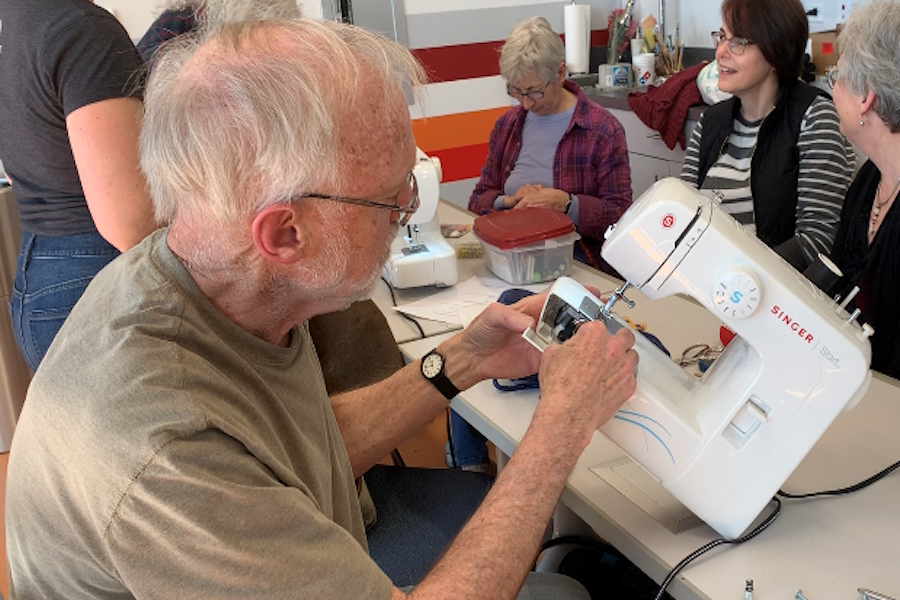 A February meeting of the Evanston Repair Clinic, where volunteers show people how to fix their broken belongings. Right to Repair advocates want to make it easier for people to do their own repairs.

When Evanston resident Beatriz Echeverria first came to the United States from Spain, she said she was shocked at Americans’ habit of throwing away their broken belongings instead of repairing them.

So, Echeverria decided to do something about it. She founded the Evanston Repair Clinic, a recurring event where people can watch volunteers repair their items for free and learn how to do it themselves.

Echeverria said the pandemic has led to an increased interest in repair because people want to save money in the COVID-19 economy and don’t want to risk infection by going out to purchase replacements.

Echeverria said there are psychological benefits in repairing belongings like inspiring creativity and making people feel self-reliant. There are also more tangible advantages like saving money and reducing waste.

However, many items are not designed for users to be able to repair, she said.

The Right to Repair movement is fighting to change that. In states across the country, policymakers are introducing legislation to make it easier for users to repair their own equipment and electronics. Groups like independent repair professionals, consumer advocacy groups, environmentalists, farmers and hospitals have taken part in the movement.

Abe Scarr, director of Illinois Public Interest Research Group, a nonpartisan group that supports Right to Repair, said the movement is about “everybody’s fundamental right when you own something to be able to maintain and take care of it and repair it.”

Some advocates say COVID-19 has highlighted the need for such legislation, as hospitals often struggle to repair their own equipment. In April, Illinois Treasurer Michael Frerichs was one of five state treasurers around the country to sign a letter requesting that ventilator manufacturers release repair information for their products.

But Scarr said manufacturers pose a challenge to the movement — they want users to either buy new equipment or return to the company for repairs.

“By being the only [repair] game in town, [manufacturers] are able to make a lot of money,” Scarr said.

For the past few years, Illinois state legislators have introduced a bill called the Digital Fair Repair Act, which would require manufacturers to make available to users and independent repair providers the tools, parts and information necessary to repair products.

State Sen. Laura Fine (D-Glenview) filed the bill in the Illinois Senate last year. Fine said the bill didn’t have a committee hearing because the pandemic cut the legislative session short. She said she’s waiting to see what the next legislative session will look like before deciding what to do about this bill.

In Illinois, a major opponent of Right to Repair has been the Illinois Manufacturers’ Association, whose members include large corporations like John Deere, on the grounds that the Digital Fair Repair Act would require the release of confidential and proprietary software.

In statements issued by the Illinois Manufacturers’ Association, they also argue enabling untrained people to repair and alter equipment could result in lower quality operation and potential safety issues, among other concerns.

Senator Fine said critics like the Illinois Manufacturers’ Association should come to the negotiating table so compromises can be reached.