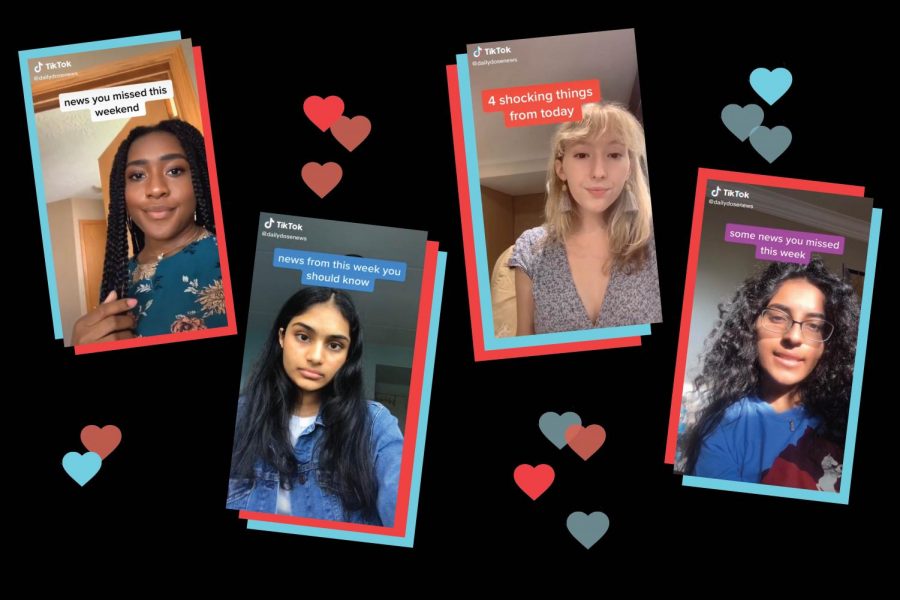 Thirty seconds, trendy music and images from around the world were all the TikTok account “Daily Dose News” needed to go viral. Run by two Northwestern and two Stanford students, the account’s focus on underreported and global news has amassed over 281,000 followers and 8.4 million likes in just four months.

Content titles on the page include “News you missed because it isn’t coronavirus related” and “What you missed in this week of news.” Stanford sophomore Emma Williamson highlighted the importance of “forming habits about the news” that maintain a global perspective.

“The reason we wanted it to be global news is that people that are in the U.S. have a very U.S.- centered perspective,” Williamson said. “Politics dominates everything ― it dominates whether you should wear a mask or not, whereas in other countries that is not really the case.”

TikTok’s brand as a short-form video platform allows users to choose from a wide range of audios, which the group has taken advantage of to set the tone of the information provided and reach a larger audience. Weinberg sophomore Sahithi Gangavarapu described the project as a form of accountability to engage teens in the news.

The team wanted to emphasize, Gangavarapu said, that news isn’t just about the United States. It’s important, she added, for teens to be aware of what’s going on outside the world in order for real change to happen.

Currently, their most popular video has garnered 6.4 million views, with thousands of comments including those from verified creators. The platform has facilitated a connection between “Daily Dose News”‘s creators and viewers that Gangavarapu describes as the “nature of TikTok culture in that people are more expressive with their views.”

“None of us have that much business experience or social media experience really so it’s been a lot of learning by doing,” Gangavarapu said. “We’ve been able to talk to some marketing agencies who have been able to give us some tips on future projects that we have, but it’s mainly getting advice and researching on our own.”

In recent weeks, the Trump administration has threatened to ban TikTok due to foreign national security concerns. With business negotiations taking place, the group behind “Daily Dose News” was prompted to establish an Instagram account in order to continue to collaborate with other creators and create larger pieces of content. Future plans also include the development of a website, app and even merchandise.

Weinberg freshman Ruba Memon said she and the other creators started “Daily Dose News” as a small project for fun, but they didn’t expect it to turn into a brand with an active following. She said the account’s growth has made them realize how much of an impact their “small” idea had.

Connected by TikTok and two group chats for content and logistics, “Daily Dose News” has remained committed to providing information about the world set to the sounds of the generation.

“With everything going on in the world, you want to close your eyes to everything and just ignore it, but the thing is, during these times you can’t stay ignorant,” Memon said. “You need to know what’s going on so you can take action and have these important discussions in your life.”