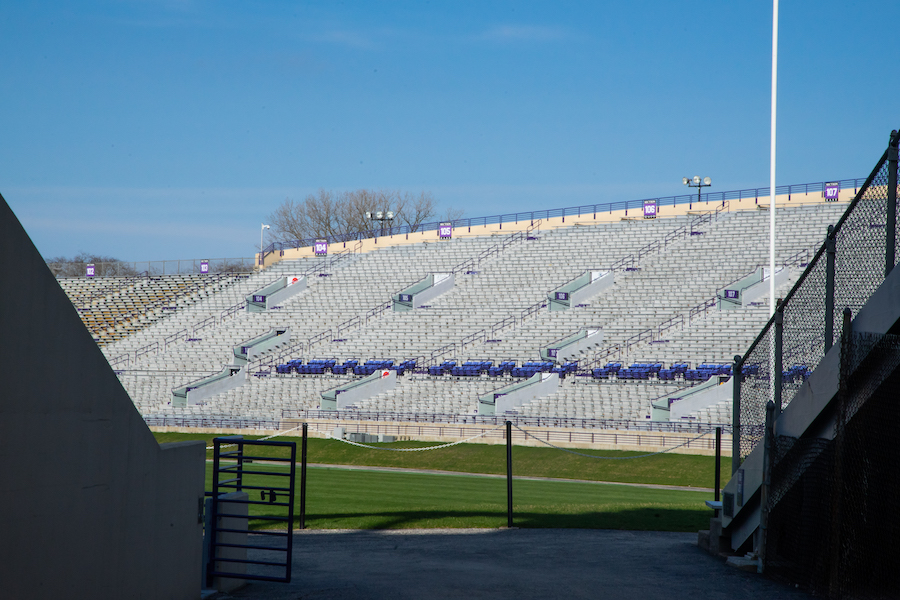 Ryan Field. Many NU students are wary about football's return.

After a massive campaign from coaches, players, families and fans, the Big Ten is bringing back football. But many Northwestern students feel the decision is a confusing step amid the school’s COVID-19 response.

Weinberg junior Georgia Schafer said she was happy when the Big Ten made the decision to cancel the season back in August, and she was glad to see the conference prioritize the health and safety of the athletes over money or politics.

“I was surprised they decided to play anyway, especially because it was an almost unanimous decision to cancel among the Big Ten schools,” Schafer said.

Big Ten officials stated that the ability for daily testing — especially rapid antigen testing, in addition to increased cardiac testing for those that test positive — was the factor that allowed them to move forward.

Third- and fourth-year students can make appointments to get tested, but underclassmen living off-campus in the Evanston area are not allowed to access it if they are asymptomatic. SESP junior Bobby Read said he understands why NU students were upset they were not given the same level of testing, but recognizes why the conference mandated rapid results for athletes.

“I personally think that we’re getting a better level of testing than other Big Ten schools. For instance, I have friends at Ohio State… (and) they’re doing random testing,” Read said. “Northwestern is mandating us to get tested each week.”

Despite the testing program, NU decided not to bring back the first- and second-year students just days before move-in because of COVID-19 concerns.

This led Weinberg sophomore Andy Bergeron to question how the school deemed it unsafe for half of the student body to return to campus, yet voted in favor of restarting the football season.

“How can they justify playing if you’ve shut down your campus?” he said.

Other conferences, like the ACC, Big 12 and Sun Belt have started playing football, and the SEC plans to begin this weekend. But many games have already been postponed or canceled, including Notre Dame’s latest game, due to positive COVID-19 tests.

Communication sophomore Sam Garcia-Bryce said with cases finally declining nationwide, he believes the spikes on college campuses and on college football teams are not helping end the pandemic.

“The sooner this virus is adequately dealt with, the sooner fans can be back in stadiums, and the sooner money can start to be made by colleges,” Garcia-Bryce said. “Resuming play and getting athletes and team personnel sick will only serve to further push back this goal.”

Spreading COVID-19 in the Evanston community was also a concern for Read, who said that despite his love for football, he doesn’t feel like playing the season is safe for the players or the community as a whole.

“There was a moment where I was like, ‘This is amazing, football is back,’” Read said. “Of course I want to see football happen this year. But at the same time, like two seconds after that moment of excitement, I was like, ‘What the hell are these people thinking?’”