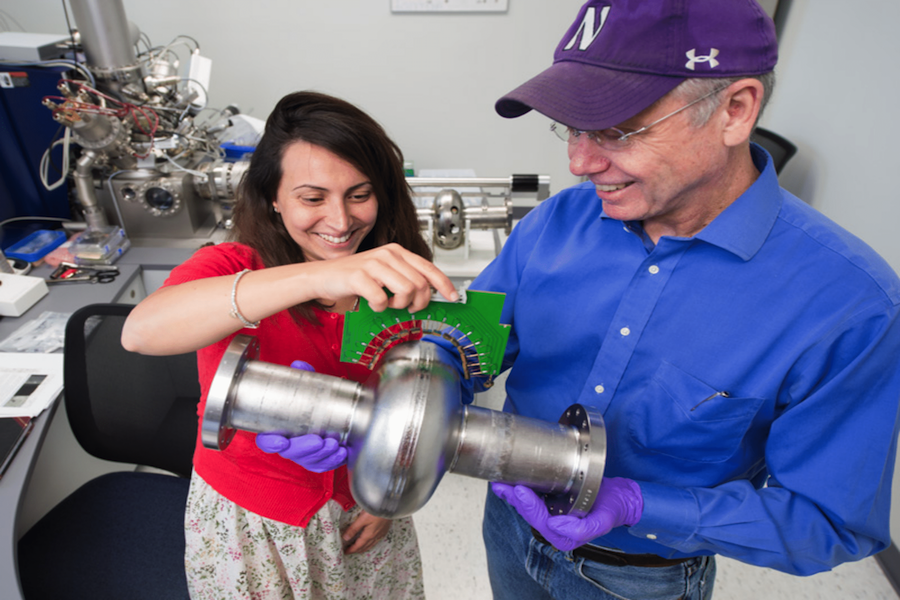 The U.S. Department of Energy recently announced that the Superconducting Quantum Materials and Systems Center, a partnership between NU and Fermi National Accelerator Laboratory, was selected as one of five national quantum information science centers.

The grant, as part of the National Quantum Initiative, consists of $115 million to be used over five years. Quantum information science has huge implications for multiple fields, ranging from traditional sciences such as physics and chemistry to industries like finance to national security, due to quantum computers’ ability to process computations at never-before seen speeds.

Quantum computers are able to perform computations at such high speeds due to the nature of quantum bits, or qubits. Classical, or traditional, computers’ data is encoded in binary bits, a one or a zero, and the data can only exist in one of these states at a time. Qubits are unique because they have an atomic system that allows them to exist in both states simultaneously, thus creating exponential computing potential.

Google and IBM have already each built their own quantum computer. At its unveiling in Oct. 2019, Google’s Sycamore quantum computer could process 53 qubits, meaning it could process two to the 53rd power quantum bits, or pieces of information. For context, the Sycamore processor performed a computation in 200 seconds that would take the fastest classical computers about 10,000 years.

Out of the five NQI centers, SQMS is the only center who has proposed to build a next-generation, “state-of-the-art” quantum computer, according to SQMS deputy director and McCormick Prof. James Sauls. This computer is aimed to process over 100 qubits, and NU has the technology to engineer it, Sauls added.

“There will be some synergy between these five different centers as we grow, and we figure out what each other are doing,” Sauls said. “Another mission that the Department of Energy has is to make the five national centers something bigger than just the sum of each part.”

As for NU’s partnership with Fermilab in SQMS, research in quantum information science has already been underway before submitting the proposal for the DOE grant, according to McCormick Prof. Peter Voorhees, one of the six materials science and engineering faculty working in the center. Fermilab has some of the world’s best superconducting electromagnetic cavities, and Northwestern has already established strength and knowledge in the field of superconductivity and materials science, Voorhees said.

“We’ve been working on it before, and we were waiting for people to agree with us that it’s an important thing to do,” Voorhees said. “Between (Fermilab) and Northwestern, this is the place where you want to put your investment.”

SQMS has four components dedicated to developing the technology, building the devices, elaborating on the physics of the sensing and recruiting young scientists and providing them with research experience and learning in quantum information science, Sauls said.

There are currently 35 people on staff from NU, a number that “will easily grow to 50,” Sauls said. Faculty from the physics and astronomy, materials science and engineering, and electrical engineering departments will lead research and engineering initiatives. SQMS will also be working in conjunction with Rigetti Computing, National Institute of Standards and Technology and other universities.

In addition to engineering a powerful computer, SQMS will also be engaging in fundamental science research, as the same devices that are used for computing can also be used in detecting particles such as dark matter, Sauls said.

Research funded by the DOE has not yet commenced because the grant hasn’t arrived yet at NU, Voorhees said. However, he said he thinks “it’s going to happen in record time” due to the technology’s “important implications.”

“I think it’s really fun and exciting to be part of an effort that’s truly interdisciplinary,” Voorhees said. “(It) involves a national lab (and) people from other disciplines that is in an area that’s so exciting and promising for the future.”