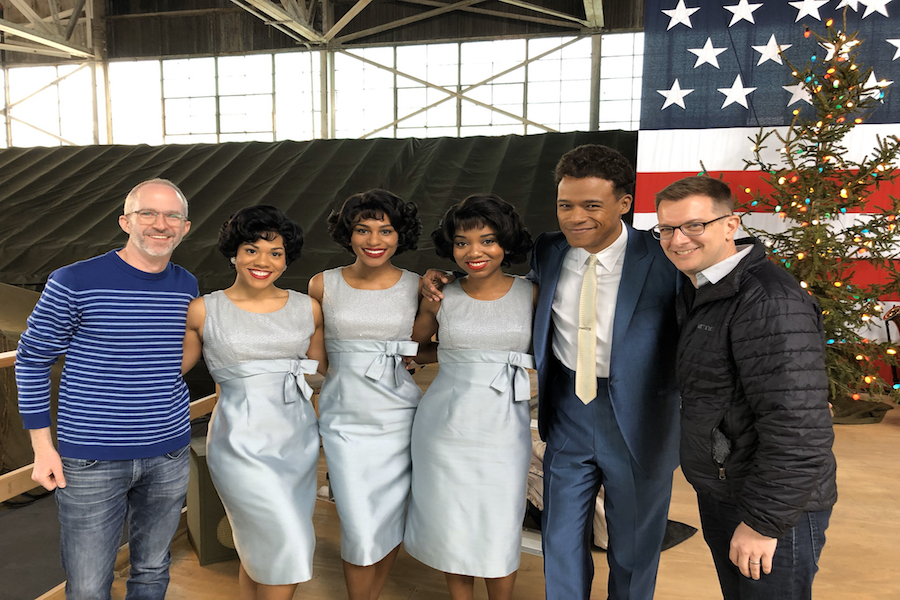 Curtis Moore (leftmost) and Thomas Mizer (rightmost) with LeRoy McClain and members of the cast of “The Marvelous Mrs. Maisel”

In the first episode of “The Marvelous Mrs. Maisel” season three, 1960s jazz singer Shy Baldwin, portrayed by LeRoy McClain, sings “One Less Angel” to a crowd of army officers who are joyously dancing and singing along. The song brought not only the show’s cast to their feet, but also an Emmy Awards nomination for Outstanding Original Music and Lyrics to Northwestern alumni Thomas Mizer (Communication ‘93) and Curtis Moore (Bienen ‘95).

Mizer and Moore wrote five original songs exclusively for the series’ third season — the first time the show had ever included original music. When creator Amy Sherman-Palladino, renowned for her work on “Gilmore Girls,” reached out and said she wanted an original voice for her character Shy Baldwin, Mizer and Moore jumped on the opportunity.

They created eight songlets for Sherman-Palladino, including “One Less Angel.” After around 37 revisions, Moore said a demo was created. Mizer said the process was so fast that McClain did not have time to make his own recording, and had to lip sync to Moore’s recording.

“That’s when you know things are real, when you’re like ‘Wait this is so incongruous,’” Moore said.

When Mizer and Moore arrived at the set at an airport hangar in Long Island, N.Y., they were overwhelmed by the 800 extras getting their hair and makeup done, Moore said. During the extras’ break, while they were still on set, Mizer and Moore watched as they sang along to “One Less Angel” after listening to it all day. The crew turned the cameras on and it ended up being the shot that was used for the final edit of the episode.

“We spend so much time in our writing room, not knowing what people are going to think of the music,” Mizer said. “So to walk into this vast hangar of 800 people singing your song — not only is it overwhelming, but it’s a moment of realizing, ‘Ok we accomplished the goal, we wrote a pop song that people are falling in love with.’”

The two artists met long before they found success with the show, and have shared a prolific career together since their days at NU. They started out writing for The Waa-Mu Show and owe their entire career to NU for giving them a chance to work together, Moore said.

Dominic Missimi, a retired professor who started the musical theatre program at NU, directed and produced Waa-Mu while Mizer and Moore were students, and has kept in contact with them since.

“They have this idea that you have to work hard to get to where you want to be and they’ve proven that all along the way,” Missimi said. “They’re both very dedicated to staying true to their craft, and I love that in them and that it’s being rewarded.”

To this day, Mizer and Moore still work with the friends they made at NU. Mizer said due to their shared background, there is a sort of shorthand that the alumni have a mutual understanding of, making it easier to work together.

“What Northwestern provides is an ability to do (many things), and create your own things off the map,” Mizer said. “That ‘let’s make it happen’ attitude is what you get with Northwestern people.”

Over the course of their careers, Mizer and Moore have worked a multitude of jobs from working in the magazine industry to working as a temp, respectively. Mizer’s greatest piece of advice is to not only cultivate a network of close relationships, but most importantly: to be kind.

Moore said one of the greatest things an aspiring artist can do is to continue working and staying dedicated to the craft, knowing that it could take a while to start making a great amount of money.

“Don’t be afraid to take whatever job you need to pay the bills,” Moore said. “Just make sure you are ready and willing to drop everything to do a theatre piece, song or concert.”

Despite all their success, the two remain incredibly humble. To Mizer and Moore, being nominated for an Emmy award and participating in celebrity-studded, career-changing events are only the cherries on top of a very sweet cake.

“It’s great going to the premiere night of Mrs. Maisel season three and having our songs on the big screen,” Mizer said. “But we love just as much gathering our friends together to do a reading of a new script together in someone’s living room. If you find joy in that stuff, it all is worthwhile.”