Away from Evanston, sophomores form “pods” to stay together this quarter 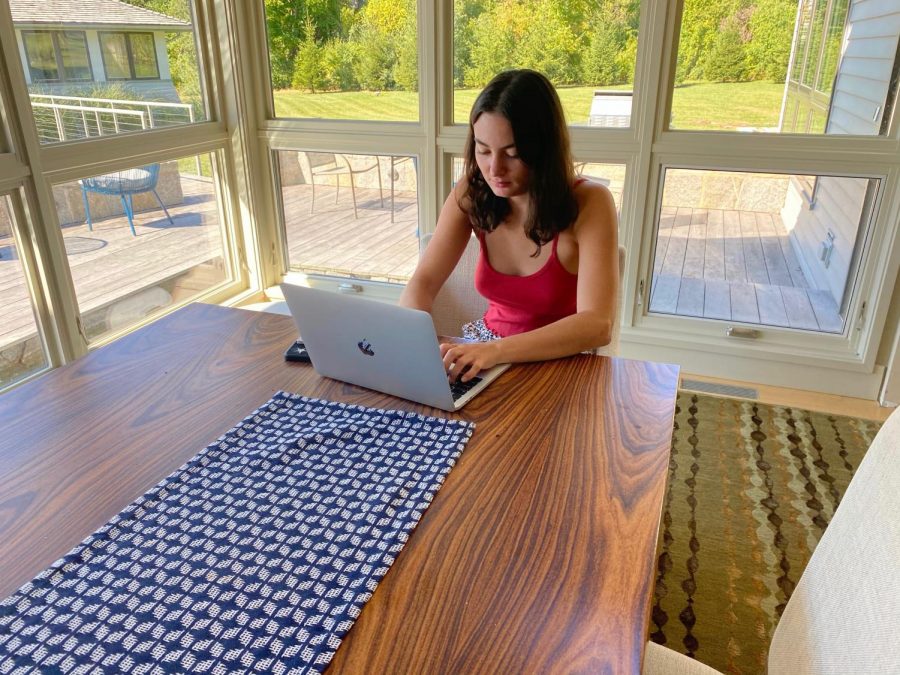 Medill sophomore Erica Davis completes online classes from a house in Skaneateles, NY. Davis is one of several sophomores completing virtual classes in a “pod” away from Evanston.

When freshmen and sophomores received University President Morton Schapiro’s Aug. 28 email — which canceled their in-person classes and on-campus housing plans just over a week before move-in — they had limited options.

Students could stay at home and carry out remote learning there, or scramble to find an off-campus apartment in the Evanston area against University guidance. But some students found a third Fall Quarter living option — forming a “pod” with friends and taking remote classes together away from Evanston.
When McCormick sophomore Adele Marchiando heard the news that she would not be allowed to move into her Slivka Residential College dorm, she started talking to friends about finding a new place to live. Marchiando said she and two other McCormick sophomores decided to move to her aunt’s vacant house in New Hampshire because it was available and because the state has a low COVID-19 case count.

“So far, it’s been good. We’re kind of in a small house, so it’s a little cramped and we’re still working on boundaries in terms of what’s a work space,” Marchiando said. “But it’s been so nice to be in person with friends again after six months at home.”

The three spend their time doing remote classes during the day and cooking meals together in the evenings, Marchiando said. So far, she said they have left the house “only for groceries.”

Katz Kadlic, another McCormick sophomore, also chose the “pod” route. He said he is living with eight friends, also Northwestern sophomores, at a house in Princeton, N.J.

“I’ve left this house maybe once or twice in the past few weeks, so there’s not a lot of exposure,” Kadlic said. “I definitely feel a lot safer here than I would in something like an apartment or dorm-style building.”

Living in a house in a less densely populated area has benefits beyond added safety from COVID-19. Real estate prices can be lower in more remote areas than they are in Evanston, so the cost of living in a pod can be more affordable than living in dorms.

Kadlic said it costs less for him to live in his pod in New Jersey than it would have for him to live on campus. Still, there are both financial and personal barriers to obtaining this type of living situation, making it inaccessible for many students.

Another “pod” group, which includes Medill sophomore Tara King, moved into a house in Skaneateles, N.Y. King is taking the quarter off, but her three housemates have been learning remotely there while she has been applying for internships. She said she has been waking up early for runs, and when everyone signs off Zoom for the day, they do outdoor activities together, including apple picking.

“When I was home, I wasn’t motivated to get up and do something for the day,” King said. “Here, I feel like I get more done.”