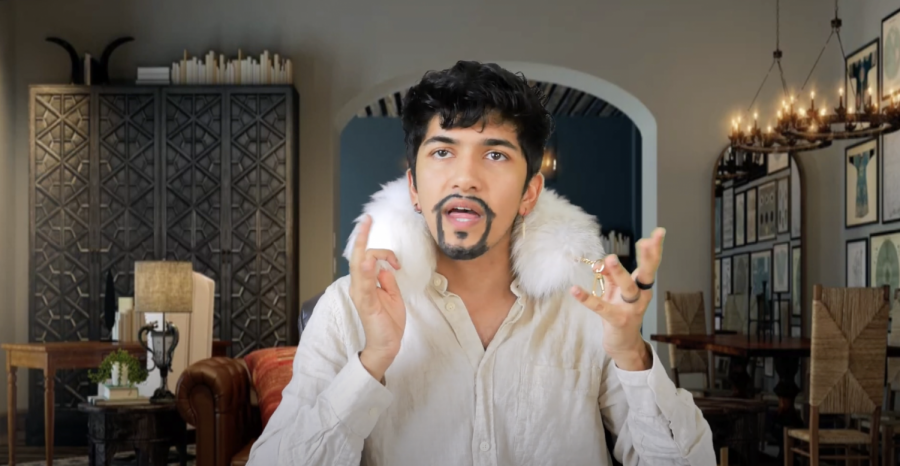 A head writer for the Northwestern comedy group Out Da Box and contributor to Sherman Ave, Rishi Mahesh sees his videos as an opportunity to combine vlogging with traditional stand-up comedy.

Communication senior Rishi Mahesh has amassed a steady following on social media over the pandemic, recently surpassing 700 subscribers on his comedy YouTube channel RISHIPUFF and nearly hitting 10,000 Twitter followers. Mahesh uploaded videos to his channel every day during the summer, poking fun at many topics in the daily news. A head writer for the Northwestern comedy group Out Da Box and contributor to Sherman Ave, Mahesh said he sees his videos as an opportunity to combine the popular YouTube vlogging format with a more traditional style of stand-up comedy. Some of his more popular videos feature unique characters, from a frat guy who throws a party during quarantine to Genghis Khan, both played by Mahesh himself. His channel has since attracted job opportunities and attention from the comedy community, landing him a role on the comedic web series “How to L0ve.” The Daily Northwestern sat down with Mahesh to discuss the evolution of his YouTube channel and his style of comedy.

The conversation has been edited for brevity and clarity.

The Daily: What was the inspiration behind the creation of your YouTube channel?

Mahesh: I was in a commercial in seventh grade, and this one guy editing it let me tag along with him. I asked my parents for a camera and laptop so I could get a video editing software. The first thing I ever posted on YouTube was a 20-minute movie in seventh grade. But in middle school, I would make the videos for my middle school announcement. Last year, I was living in Los Angeles, and I shot a short film that I wrote and put that on YouTube. It was the first long video that I made, and after that I started posting more regularly.

The Daily: Since you’re also involved in stand-up on campus, what are some of the key differences between the two forms of comedy?

Mahesh: The transition to video came out of me wanting to practice stand-up, and there was no other option besides making videos. When I started filming the videos, there was all of this commentary in my bloopers where I was like, “What am I doing?” It’s definitely not less awkward, despite there being no people there. But eventually I got to a place where I was able to know what kind of reaction my videos would get, even though there was no live audience.

The Daily: Over quarantine, when you were making a video every day, what did that filming and editing process look like?

Mahesh: I had started watching a lot of videos about how people grew their channels, and I couldn’t think of any quick way to do it besides just starting to post a video every day. When I posted every day, I would wake up, immediately hit social media and try to figure out what people were talking about that day. Usually there would be a funny concept, for example, a frat guy getting COVID. Then I just tried to create a character and write as many jokes as possible before 4 p.m. when my remote internship ended which is when I started filming. It took a considerable amount of effort to start yelling at my camera for 15 minutes with my script, and I always felt bad for my roommates. After, I downloaded the footage onto my editing software, edited it and uploaded it to YouTube or Twitter that evening.

The Daily: How did quarantine affect your videos?

Mahesh: For the rest of my life, I’m going to live with a little bit of the guilt that this came about because of quarantine. A lot of the traction I ended up getting was because I was providing commentary on the terrible things that were happening at the time, and it’s weird that there is this possibility of material success from it now. But if it weren’t for quarantine, I don’t think I would have had the time.

The Daily: Do you have any advice for other students who are interested in getting involved with video-editing or comedy?

Mahesh: You have to make your mistakes in order to make anything better. I think the videos I made during the first week or two were all bad, but I wouldn’t have been able to make stuff that was better unless I got the bad stuff out of my system. Just do it, and do it constantly, and there’s no need to be efficient about it.

— Stacy Garrop premiered ‘Battle for the Ballot’ earlier this month

— The show must go on: Theatre groups reimagine shows for virtual stage