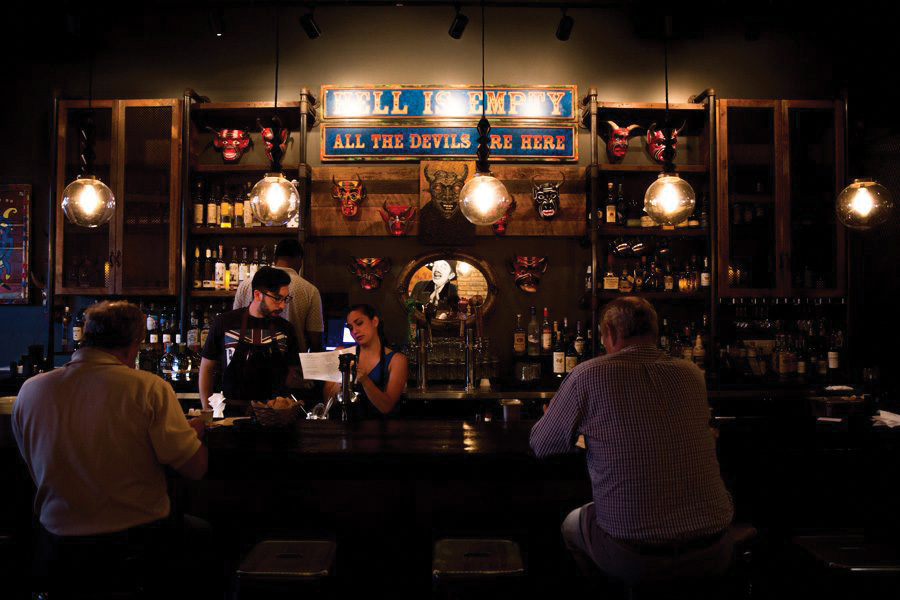 The interior of Taco Diablo, 1026 Davis St. The Blue Horse Tavern will join the restaurants at this location later this year.

After nearly 30 years in Evanston, Core & Rind Hospitality is opening a fourth restaurant, The Blue Horse Tavern, with a focus on American food.

The hospitality group hosts multiple restaurants under one roof, including LuLu’s, Taco Diablo, Five & Dime and soon, The Blue Horse Tavern. All of the group’s restaurants are located out of 1026 Davis Street.

Owner Daniel Kelch said he has always thought about opening multiple concepts for restaurants under one roof, and eventually brought that concept to fruition with Core & Rind.

Kelch said over the years, LuLu’s has brought in more carryout and delivery sales than in-house dining. As a result, the team decided to convert LuLu’s to a virtual restaurant and build The Blue Horse Tavern in the former LuLu’s space. The restaurant will open once Five & Dime closes its rooftop deck for the season, he said, and it will likely operate at a reduced capacity because of COVID-19.

Kelch said he hopes the tavern will act as a casual space, and will allow more menu flexibility. Liquor sales at LuLu’s have been lower than the other two restaurants, he said, but the bar within the new tavern will feature bourbon and beer from local breweries.

All of the group’s restaurants try to serve a caliber of food that’s similar to more upscale places, but at a lower price point and in a more casual environment, Kelch said.

Kelch said he, along with much of his staff, is a classically trained French chef. Much of Kelch’s staff has also worked with him for decades and is able to make a wide variety of high-quality dishes.

Apple Tem, one of the front-of-house managers, makes a lot of the group’s pastries and has been working with Kelch for eight years. Tem, Kelch and others in the restaurant have been talking about what the The Blue Horse Tavern menu will look like. In addition to traditional American food, they hope to vary the menu based on the season.

“The desserts that we put out probably go by seasons,” Tem said. “Something classic all the time. Some of the chocolate menu and then for fall come, we have something apple or fall food or one of those.”

Kelch said COVID-19 created an opportunity for construction on the LuLu’s space because the restaurant already had to close temporarily.

Kelch said the group worked with a local contractor and team to create the new layout for the tavern. Core & Rind Hospitality Manager Nathalie Barbier said the team completely re-did the interior of the LuLu’s space. The tavern will have wood paneling, leather booths and a new bar.

“There’s a number of people who just walked into the space and they’ve been like, “Wow, this is great. I can’t wait till this opens. This looks like it could be a great place just to have a drink, have food and relax,’” Barbier said. “It really gives them a place just to be able to drop by, have drinks and be casual but yet comfortable.”