NU Declassified: Zoom Through The Arch 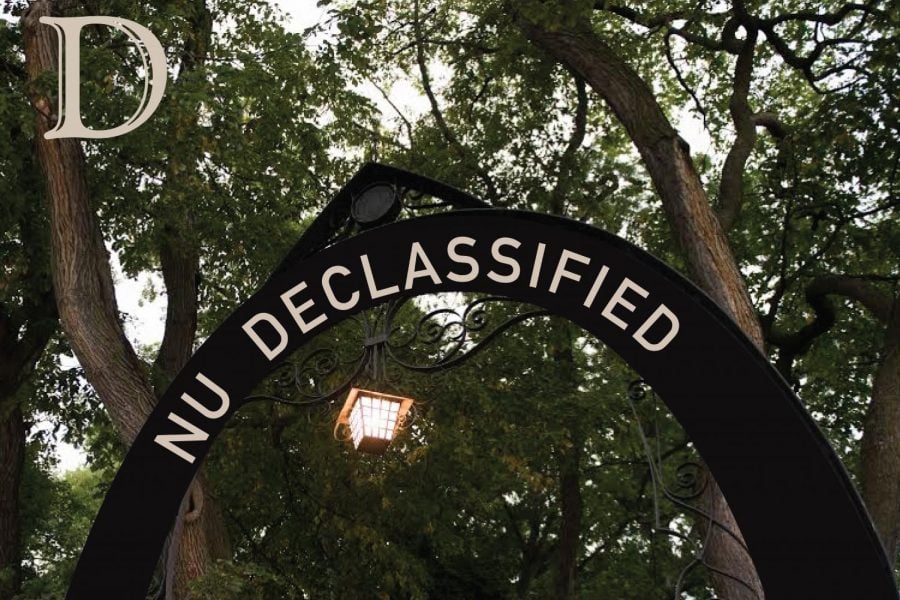 Peer Advisors, members of the Wildcat Welcome Board of Directors and incoming freshmen talk about the transition to a remote Wildcat Welcome. Between updating TNDs, hosting fun online social events and tackling accessibility issues, this year’s programming was unprecedented.

MORTON SCHAPIRO: This is certainly not how I ever imagined I would be greeting our first year and transfer students, and I know this isn’t how you envision the start of your college experience. I have to say, I hate the fact that we’re not together in person. But that doesn’t change the fact that I’m absolutely thrilled that you are a Wildcat. And I wholeheartedly welcome you to Northwestern.

ANIKA MITTU: And I’m Anika Mittu. Welcome back to NU Declassified, a podcast exploring how wildcats thrive and survive on Northwestern’s campus. Though most Wildcats begin their time at Northwestern by moving into their dorms and marching under the Weber Arch, the class of 2024 was ushered in with a virtual Wildcat Welcome. To make it happen, members of New Student and Family Program’s Board of Directors squeezed social events, speeches and info sessions into one online experience.

LUISA BROWN-HERNANDEZ: It is a really fun experience and a lot of people who went to Northwestern talk about it when they talk about their Northwestern experience because I think that they go kind of all out for welcoming the students. And I think it’s pretty representative of the lengths the school is willing to go to for its students.

ANIKA MITTU: That was Luisa Brown-Hernandez, a Bienen freshman. When Luisa imagines Wildcat Welcome, she envisions the campus’ outdoor spaces.

LUISA BROWN-HERNANDEZ: I picture a photo I saw on the Northwestern website, where it’s like a large, green, grassy space with a ton of booths and tables set up. And I, for some reason, really vividly picture a bouncy castle.

MADISON SMITH: But this year’s Wildcat Welcome looked a bit different. Wildcat Welcome 2020 transitioned to a mostly virtual format in July after the university announced “Wildcat Wellness”: a two-week long period of mandated social distancing after students first arrive on campus due to COVID-19 health concerns. However, on August 28, the University barred most first- and second-year students from living on campus this fall, and Wildcat Welcome transitioned to completely remote programming. For the class of 2024, this meant a virtual start to their first year at NU.

LUISA BROWN-HERNANDEZ: I was initially very upset. I’ll admit, I did cry a little bit when I had to tell my parents just because it’s such a sudden change, and it’s disappointing obviously, but I came to terms with it pretty quickly because we are in a pandemic, and I understand that they have to make some tough calls.

MADISON SMITH: Josh McKenzie, the interim director of New Student and Family Programs and one of the most well-known faces of Wildcat Welcome, understood why students were so upset at the announcement and found himself appreciating the hard work of everyone involved in the program all the more.

JOSH MCKENZIE: When something you were looking forward to changes and something drastically different happens, it’s so easy to just be like, ‘I am not going to do that’ like I can’t. And the amount of PAs, our board members included, that like accepted that challenge and were like, “You know what, they’re still students starting here and they’re still students that deserve something good and deserve connection.” That has been so wonderful to see.

MADISON SMITH: One of those PAs, Max Johnson, a School of Communication junior and second-year PA, wishes the University made the announcement sooner.

MAX JOHNSON: Especially because they sort of had their senior years of high school cut off, they were all in this space of limbo, where they were all very excited for college, but I think they still sort of were wanting that closure from high school.

ANIKA MITTU: Max also faced his own disappointment. Last year, he had the chance to bond with fellow Peer Advisers during PA Camp, a PA training program in the days leading up to Wildcat Welcome. But this year’s PA Camp also went virtual amid COVID-19. Virtual PA Camp consisted of up to seven hours of Zoom sessions each day.

MAX JOHNSON: Last year, I really experienced like a very big closeness with my board group. And this year, I was like, in the online format I don’t know if we’ll be able to get that. But so far, I’ve been really excited with how much interaction I’ve had with my board group, and the community is still there, even though the in-personness is not.

ANIKA MITTU: Maia Brown, a Medill senior and director for staff training and curriculum for NSFP, helped move PA Camp to a virtual format. Maia hoped to support PAs through the transition.

MAIA BROWN: The idea of Wildcat Welcome that they had was really stripped from them. So being there to support them and work on making an alternative that is at least somewhat better and having conversations about how to do that.

MADISON SMITH: As Wildcat Welcome leaned more and more toward totally remote programming, some raised concerns about accessibility, from conflicting time zones to WiFi access. So, Maia and NSFP worked to tackle these issues.

MAIA BROWN: We’ve been trying really, really hard to make sure that we have asynchronous options just because of people having to work, people being in different time zones, people not necessarily being able to wake up in time for certain content. The WiFi thing has been a difficulty for us and has remained a difficulty for us. But we have sent people laptops to try to facilitate their ability to connect.

ANIKA MITTU: The staple of each year’s Wildcat Welcome, the True Northwestern Dialogues, more commonly known as TNDs, also changed to fit this year’s remote structure. Some transitions were simpler than others: the Student Body TND, which focuses on consent and sexual assault, was presented as a prerecorded performance with the actors performing through Zoom. However, the Diversity and Inclusion TND got a complete makeover.

MAIA BROWN: The Diversity and Inclusion TND, which is now the Social Justice and Inclusion TND, has changed a lot. So it’s going to be an anonymous polling for specifically what used to be the stand-up sit-down activity. So you get the impact that the activity was originally meaning to have, without some of the anxiety that a lot of students have talked about with having to stand for certain identities that they’re not necessarily comfortable with standing for. And there’s also a lot of added content about what it means, to like talk about social justice at a predominantly white, wealthy institution like Northwestern, what it means to talk about equity and inclusion with the current state of racial affairs in the world.

MADISON SMITH: But this year’s Wildcat Welcome had more than just the serious conversations. Students were also offered plenty of nightly social programming including, but not limited to, virtual a capella fest, virtual caricature drawings, and tons of virtual mixers, including one themed “pet introductions!” Elisabeth Betts, a Medill freshman, had lots of fun with one of this year’s most popular recurring events, “speed friending.”

ELISABETH BETTS: I think for me speed friending every night has definitely been the best event. I think you ask anyone and it’s great. Like, two nights ago the participants were 300 people, so everyone’s really into speed-friending, and it’s a nice way to meet your class.

MADISON SMITH: Despite having never actually met in person, many freshmen were also able to find community in their new PA groups rather quickly. Elisabeth’s PA group bonded over group Kahoots and other fun online activities organized by her two PAs, Mary and Andrew.

ELISABETH BETTS: My PA group is actually, like, lit, like, I love my PA group. I ride for my PA group. Mary and Andrew have really come together in ways that I didn’t think were possible. They’re so enthusiastic about it, and it’s making everyone else enthusiastic.

MADISON SMITH: And Elisabeth wasn’t the only incoming freshman impressed with this year’s Wildcat Welcome. Luisa Brown-Hernandez found herself pleasantly surprised with the transition to an online program as well.

LUISA BROWN-HERNANDEZ: A really surprising thing about Wildcat Welcome for me was how much I was invested in the advising programming and stuff like that. Because I feel like if I was sitting through seminars and stuff during the day, I’d be tired out. Being in person, I might lose interest in those seminars as they went on. But for some reason, having them over Zoom, maybe because they’re the only thing I can do during the day to pass the time, I’ve been actually pretty invested in them.

ANIKA MITTU: Wildcat Welcome may end this week, but the Wildcat Welcome team has no intention to stop supporting the incoming freshmen. Carter Liebman, the director of new student engagement for NSFP, plans to continue some of Wildcat Welcome’s many online initiatives into the Fall Quarter, one being his podcast, “Before the Arch,” in which current students were able to speak on their experiences at Northwestern.

CARTER LIEBMAN: It feels like we are students in voids of our own little pocket universes. So there are a lot of things that have been on my mind as how to face that. And one of the things that I want to continue, we have “Before the Arch” podcast; I want to transition that into an “After the Arch” podcast where we showcase 2024 voices, what 2024 people are up to and doing. Our job technically ends September 16, when the day of classes start, but that doesn’t mean we can’t still create community, right?

ANIKA MITTU: With all of the new programming, social media initiatives and remote adaptations, many organizers felt like this past week was a feat to be proud of.

CARTER LIEBMAN: There’s just so much, and it’s like, I’m so proud of what it is. And I hope you can hear that in my voice because like, it truly is the result of like actual human beings running around like crazy, trying desperately to pull a bunch of strings together into something amazing.

MADISON SMITH: Wildcat Welcome may have looked different this year, but its traditions lived on. March Through The Arch, one of Northwestern’s most famous traditions, was one of them. Over the course of a two-hour and 53-minute live stream, the name, school, graduation year and hometown of each new student was displayed on an image of The Arch. Josh McKenize spoke to us about why preserving traditions like these was so important for new students this year.

JOSH MCKENZIE: The students that are starting here, starting with Northwestern, they still deserve something really special, and they still deserve something that honors and celebrates everything that they have worked for. For some, Northwestern is a place that has been a dream that has become reality. They’ve already had milestones shifted from them as we think about proms or as we think about what it means to finish high school. What I hope, at the very least, is that they feel like they are starting a path that is theirs, and that they can really hopefully take time to honor and celebrate for themselves.

ANIKA MITTU: This episode was reported and produced by me, Anika Mittu, and Madison Smith. The audio editor of The Daily Northwestern is Alex Chun, the digital managing editors are Molly Lubbers and Jacob Ohara, and the editor in chief is Marissa Martinez.