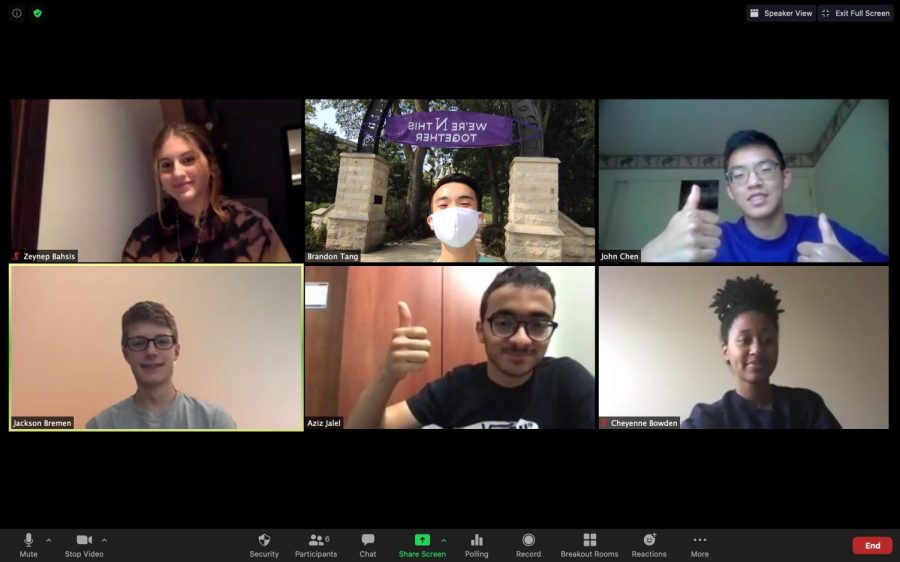 Brandon Tang at virtual March Through the Arch. Students' names were displayed one-by-one over a picture of the Weber Arch, a twist on the usual tradition for the virtual format.

Every September, first-year Northwestern students are typically found marching through the Weber Arch, saying “Kiss ‘n’ Bye” to their families and hanging out with new friends on the Lakefill.

Instead, these Northwestern traditions were reimagined for an online format.

For this year’s March Through the Arch, students’ names were virtually displayed one-by-one on The Arch. Entertainment included a caricature artist and “mind reader,” both online. In-person socializing was replaced by an activity called “speed friending” where students rotated through breakout rooms to get to know each other.

“We’ve had to pivot quite a few times,” SESP senior Jacob Jordan, who serves on the board of directors for New Student and Family Programs, said. “But it’s been an interesting experience, and I think we’re pulling it off.”

Other changes from previous years include breaking up the president’s convocation into sections and showing some asynchronous videos before getting into discussion groups for True Northwestern Dialogues. There were also Zoom panels geared toward a variety of affinity groups that students could attend.

Weinberg freshman Urja Patel said she felt Wildcat Welcome was well-organized, but the social aspect was challenging to create online.

“I didn’t get to connect with my (peer adviser) group as much as I probably would have if it was in-person,” Patel said.

Weinberg freshman Savir Maskara said he was disappointed by the lack of opportunity for spontaneity, and he found it difficult to meet people outside of his PA group. Instead of bumping into a familiar face and asking them to meet up on campus, now he said coordinating meetings requires more planning.

Weinberg senior Brandon Tang, who was a PA for the third time this year, said time zone differences also posed a challenge this year. While students could get an excused absence to avoid staying up, one of his students from Turkey once woke up in the middle of the night to join a call.

“She was such a trooper,” Tang said. “She stayed awake until like 3 or 4 a.m. to attend a lot of these things because she just really loved interacting with our PA group.”

When his PA group’s names showed up on the virtual March through the Arch, Tang went to the physical Arch on campus to “walk them through” while he was on the call.

Jordan added that it’s easier to learn people’s names when they’re “right in that little box on the screen.”

“We’ve been very pleasantly surprised by how eager and engaged the new students (are),” Jordan said. “And I think that’s a testament to how resilient the PAs have been in being there for them and giving them space to meet other new students, never wavering or giving up on this process.”