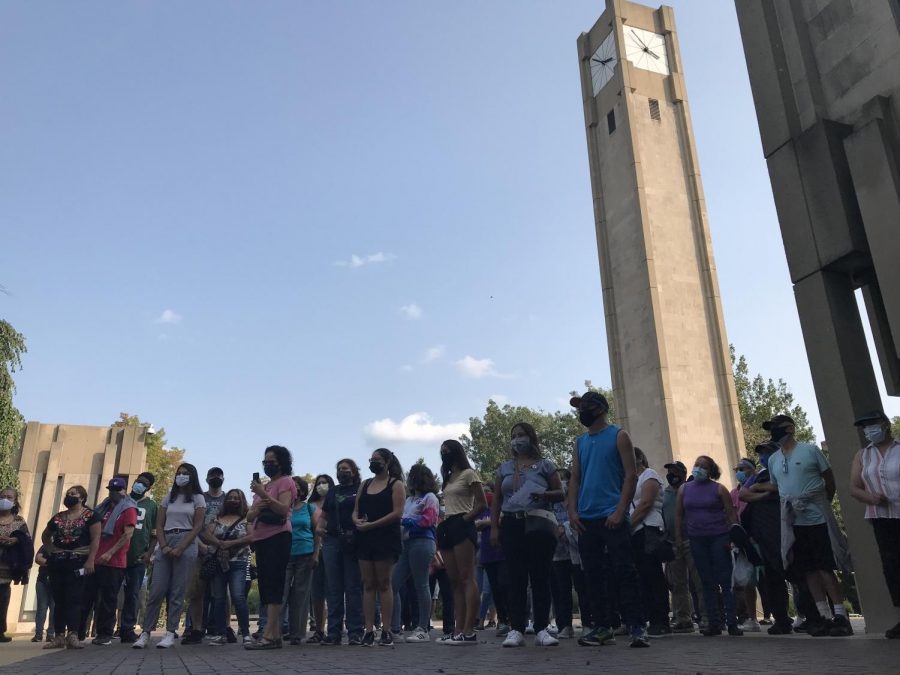 A group of workers and students gathered in front of the Rebecca Crown Center, 633 Clark St.

Subcontracted workers and their student allies delivered a petition to Northwestern administrators Wednesday afternoon asking for commitment to dining worker health and safety protections amid the pandemic.

The group walked from Oldberg Park to the Rebecca Crown Center to give the petition — which has almost 1,600 online signatures — to the office of Julie Payne-Kirchmeier, vice president for Student Affairs.

Sponsored by UNITE HERE Local 1, the union representing NU dining and service workers, the petition calls for the continuation of health insurance contributions for laid-off workers, which expire soon. It also demands workers be granted a quarantine pay, which guarantees normal wages for workers required to quarantine for two weeks, and a hazard pay, an increased wage for those working during the pandemic.
“Compass (Group) should commit to an agreement about COVID-19 worker safety, including thorough health and safety training, hazard pay, a fair attendance policy, and voluntary lay-off, BEFORE the school year starts,” the petition read.

Noah Carson-Nelson, lead research analyst for the union, said they believe it was important to hand-deliver the petition so the University is informed of the demands made to guarantee these health and safety protections for workers.

Though these workers are employed directly by Compass, the University’s food service provider, Carson-Nelson said this issue affects students and their health as they make their way back to campus.

Last week, Compass told The Daily that the pandemic forced the company to lay off workers due to reduced student traffic in dining halls. A Compass spokesperson said in an email to The Daily that the company has done “everything (it) can” to help out its associates by extending health benefits and providing other assistance.

“All terms and conditions of the associates’ employment are governed by Compass’ contract with the union,” the Compass spokesperson wrote. “Wages, attendance, health insurance coverage and so on are dictated by that contract, which the union itself negotiated and which its members ratified.”

Valentina Espinosa, a housekeeper for the Allen Center, has worked at NU for 16 years but was laid off in March.

The nearing expiration date of health insurance for laid off workers is her main preoccupation, Espinosa said, because as a single mother, she also has to worry about the safety of her daughter. One of her co-workers who has cancer has struggled to apply for Medicare and pay for necessary mammograms, she said.

Espinosa added that she hopes this petition will mobilize students and service workers to request help from the University and the companies through which it subcontracts workers.

“Now it’s my fight,” Espinosa said. “Because the company is not helping us or they don’t want to follow their contract.”