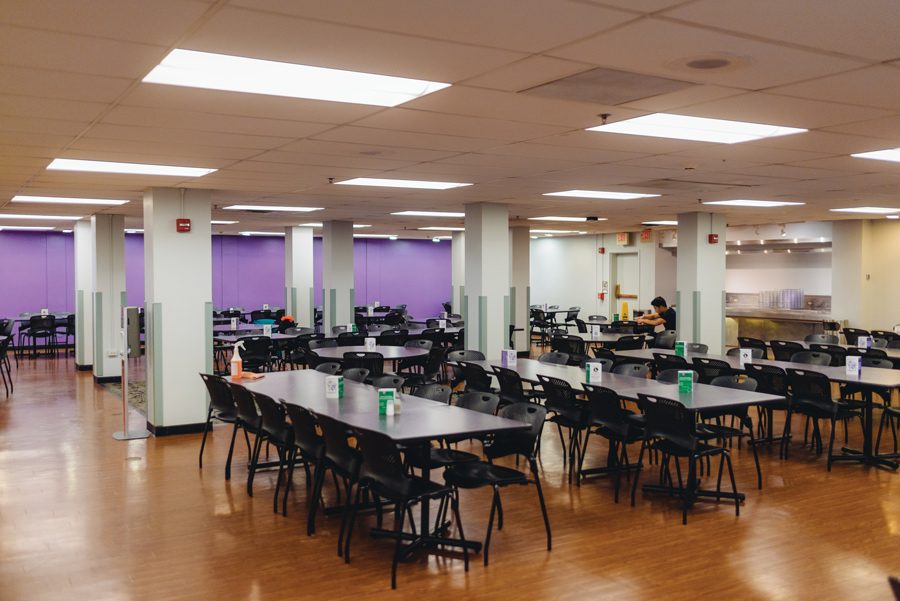 Elder dining hall. Elder is one of the on-campus dining halls that will be closed for the fall due to the University’s decision to de-densify campus.

In a Thursday petition, Students Organizing for Labor Rights at Northwestern demanded the University and Compass Group redress their treatment of laid off service workers during the pandemic.

Compass, NU’s food service provider, has furloughed and laid off hundreds of dining employees subcontracted with NU during the pandemic. University President Morton Schapiro’s decision two weeks ago to bar first- and second-year students from campus this fall led to the closure of two on-campus dining halls and a few retail stores. The University then announced that Compass would lay off another 100 workers by Sept. 20 — some of whom were rehired after already being laid off.

“Our hearts go out to the associates who’ve been laid off and otherwise impacted by the pandemic,” a Compass spokesperson told The Daily. “We’ve been doing everything we can to help them, extending health benefits and providing other significant assistance.”

SOLR wrote that workers are currently bearing the brunt of NU’s last-minute decision and the “incompetence and lack of transparency” from administrators. Despite SOLR’s demands in the spring that the University protect and compensate its workers for lost wages, the group wrote that administrators “reneged” on the only deal they came up with to provide support.

“Empty promises or claims about caring about community are not enough,” SOLR wrote. “Compass and the University have provided almost no material relief since March for workers who suddenly lost their primary source of income.”

Another demand is that NU and Compass provide stipends of at least $600 a week to match the initial federal unemployment aid outlined in the Coronavirus Aid, Relief and Economic Security Act. This is especially important, SOLR wrote, now that the federal government stopped providing the additional $600 per week in unemployment benefits at the end of July. SOLR further demanded that NU and Compass assist all unemployed workers in finding new, accessible employment.

As of Sept. 9, SOLR has raised over $80,000 in mutual aid funds to support workers during the pandemic, with priority given to those who have been permanently laid off. In the petition, SOLR demanded the University and Compass match at least the amount of money it has raised since March — writing that they are both “multi-billion dollar corporations” with large revenue streams, while SOLR depends entirely on community funds.

One demand that SOLR had previously announced that the University cut Schapiro and all other administrators’ salaries to the level of a full-time service worker — around $30,000. With Schapiro’s salary of at least $2 million a year in his role as president, SOLR wrote he makes over 60 times the amount of an average service worker.

SOLR also demanded NU and Compass administrators respond to the full list of grievances in a transparent manner, as in past months it has witnessed administrators “perpetually brush aside” student and worker concerns in the community. All administrators involved with the decision-making process regarding workers’ employment statuses and severance packages, SOLR wrote, will be invited to a public town hall.

“This is the least Northwestern and Compass can do to redress the violence they have enacted and continue to enact through the blatant negligence and exploitation of workers’ lives,” SOLR wrote.