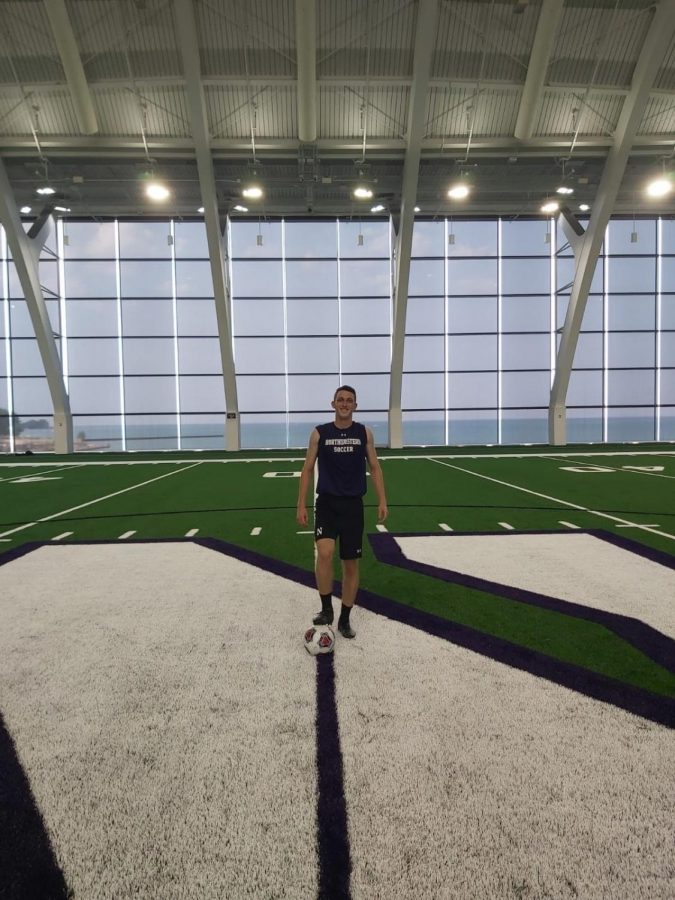 Rom Brown. The 22-year-old freshman comes to Northwestern after serving in the Israel Defense Forces.

Rom Brown, a defensive center midfielder from Hod Hasharon, Israel — a city roughly 15 miles from Tel Aviv — knew he wanted to play soccer in the United States. So, last June he reached out to David Znaty, the owner and CEO of Horizon Life Sport — a recruitment agency that helps athletes from around the world connect with athletic programs across America and navigate the college admissions process.

From watching Brown on film and in person, Znaty learned that the midfielder had the skills to play soccer in America. Then, when he saw Brown’s scores on the SAT and the Test of English as a Foreign Language, Znaty realized Brown could pursue his passion at an elite university.

Today, Brown is an incoming freshman at Northwestern.

But he is not your typical first-year. The 22-year-old comes to NU after a 10-year career with Hapoel Hod HaSharon F.C. and two and a half years of service in the Israel Defense Forces.

For Brown, soccer has always been a family tradition.

He began playing soccer in second grade, following in the footsteps of his brother Sahar, who currently plays professionally for Hapoel Katamon Jerusalem, a fan-owned football club. A few years later, his younger brother Peleg — now a member of the Hapoel Kfar Saba U-17 squad — laced up his cleats for the first time.

At age 11, Brown moved with his family to Dallas because of his father’s job. While there, Brown continued his soccer career with one of FC Dallas’ youth teams and switched positions from forward to defensive center midfielder.

Brown said his teammates in Dallas helped him adjust to American culture.

“The first month or two are hard, but then you understand the fitness requirements and the players get to know you,” Brown said. “It was a great experience. It really made me a better player and (gave me) a stronger character and really fulfilled me with experiences that I will remember for the rest of my life.”

After two years, Brown returned to Israel and began playing for Hapoel Hod HaSharon F.C. in 2010. He spent seven years with the club before being named the captain of its U-19 team in 2017. In the role, he tried to create a united atmosphere in the locker room to help the club win on the field, he said.

As his responsibilities on the pitch increased, so did his duty to his country. After graduating from Mosinzon High School, Brown joined the IDF in March 2017.

In Israel, all “fit for service” citizens 18 years or older must join the armed forces for 24-32 months — a practice that began in 1949 with the passage of the Defense Service Law.

Brown said he had a difficult time transitioning from high school senior and soccer captain to soldier.

“When you’re 18 years old, you have never experienced such a strict system (as) the army,” Brown said. “You have to grow up into it and stay strong and realize that you are part of a system that is greater than you, greater than your dreams.”

Brown continued his soccer career in the IDF, but it was not easy. Since he had military training for roughly 35 hours a week, Brown had to find extra time to practice. He managed to fit in 10 hours a week playing with Hapoel Hod HaSharon F.C., and he trained individually for an additional five hours — all on top of his army responsibilities.

But whenever things overlapped, the IDF took priority.

“There are times when you get missions that you need to dedicate for the army, which conflicts with your soccer training or a game,” Brown said. “That’s all about representing the country with honor. When your commander needs you, you got to get the job done.”

Gradually, Brown found similarities between serving his country and playing for his club, such as the importance of being a good leader and listening to orders from authority figures, like commanders and coaches. While in the army, he also saw the value of teamwork.

“You… get to work together as a team,” Brown said. “(You) get to face the same difficulties that each other face and uplift each other through hard times.”

Brown exited the IDF at the end of 2019, still hoping to attend college in the United States.

After playing in 81 games and scoring 26 goals from 2017-19, he was named the captain of Hapoel Hod HaSharon F.C.’s semi-pro senior team, a squad that includes players as old as 40.

Despite the opportunity to stay in Israel and lead his home club, Brown wanted to attend college in America to receive a top education and become a better soccer player. He contacted Znaty, who advised Brown to get in touch with various universities.

Znaty was familiar with NU and men’s soccer coach Tim Lenahan and reached out on Brown’s behalf. After viewing his game film, Lenahan was impressed with Brown’s technical skills and athleticism. But what stuck out to the coach the most about Brown was his maturity.

“You’re going to be able to coach a man,” Lenahan said. “He’s gonna have a different perspective having been in the military and the discipline that brings and the age and wisdom that comes with it.”

In late February 2020, Brown arrived in Evanston for a visit, where he toured NU and met the team for a game of pickup soccer.

Sophomore midfielder Vicente Castro, a native of Santiago, Chile, said he spoke with Brown about NU’s academic environment and the experience of playing college soccer in America.

“I could feel related to him in terms of not many (of us being) internationals on our team,” Castro said. “He had similar questions that I had last year coming here, and that was the deepest point we got connected.”

When Brown returned to Israel three days later, he realized that Evanston was where he wanted to continue his academic and athletic career, and he committed to the Cats on March 4.

Waiting for the opportunity

However, Brown’s dreams of playing college soccer were soon put on hold. Within two weeks of his visit to Evanston, Israel strengthened its social distancing measures to fight against COVID-19. Soon after, Prime Minister Benjamin Netanyahu declared a national state of emergency.

Hapoel Hod HaSharon F.C. canceled all its practices and games, so Brown played at a local training ground and worked out at a gym and on the beach throughout the summer to keep his soccer skills intact.

Once he received his educational visa, Brown boarded a plane to the United States on Aug. 18.

When Brown arrived in Evanston, he met up with his teammates, including Castro, and he has participated in numerous activities with them, including playing soccer at the beach and going to dinner in Evanston.

When play resumes, Brown is expected to have a sizable role for the Cats. His passing skills and ability to control possession make him an asset in the midfield, and Lenahan envisions him taking on a similar role to former midfielder Mac Mazzola.

Even though NU will not take the pitch this fall, Brown is looking forward to starting other aspects of his NU journey. He moves into his apartment on Sept. 11 and plans to major in psychology on the pre-med track.

“I’m very excited,” Brown said. “I’ve been looking forward to this for a year and a half.”

Correction: This article has been updated to identify Mac Mazzola, not Matt Moderwell, as the player that Rom Brown will have a similar role to on Northwestern’s Men’s Soccer team. The Daily regrets this error.