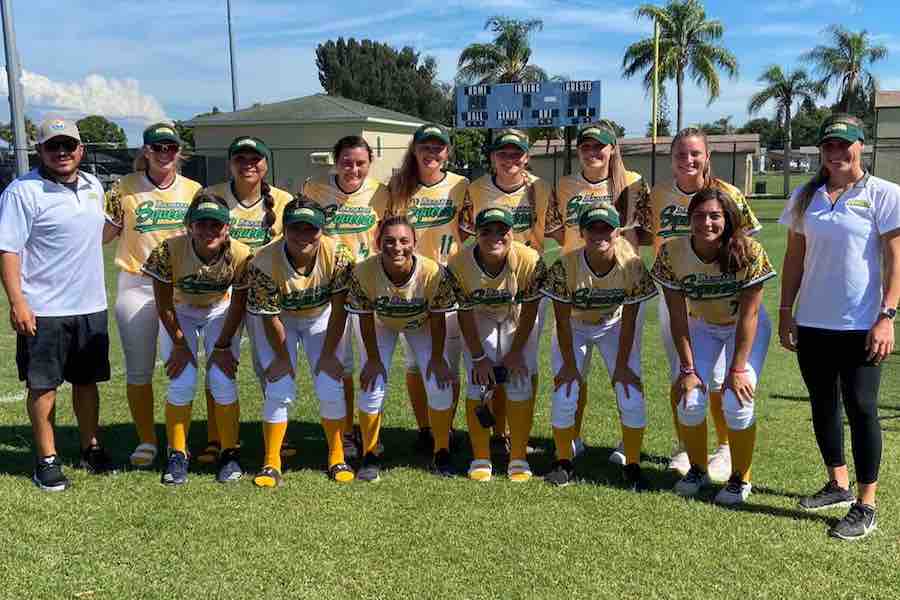 Northwestern’s Nikki Cuchran and Kenna Wilkey starred this summer for the Manatee Squeeze in the inaugural season of Florida Gulf Coast League play.

The inaugural softball season of the Florida Gulf Coast League was one week old, and the Manatee Squeeze, who had won four straight after dropping their opener, trailed FastPitch U by two runs in the seventh inning.

Wisconsin star Taylor Johnson had just hit a two-run single to close the gap, and Northwestern infielder Nikki Cuchran was next to bat.

After taking two balls and a strike, then fouling off a pitch, Cuchran didn’t miss the next one, driving it deep over the right field wall for a game-tying home run. The blast sent the game to extra innings, and the Squeeze won it 13-8 with five runs in the eighth, the last two coming on another Cuchran long ball.

The winning pitcher for the Squeeze that day was also a Wildcat. Kenna Wilkey had entered in the fourth with her team behind 6-3, but she settled things down almost immediately, giving up just one hit in 4.1 innings while striking out seven to allow the Squeeze to make their comeback.

“They both dominated in the league, and I think their confidence and continued growth is going to be huge,” NU coach Kate Drohan said.

Cuchran, now a junior, and Wilkey, now a senior, spent their summers in Lakewood Ranch, Florida, playing in the first-ever college summer league for softball players. Summer leagues have been a college baseball institution for decades, but until this year, softball players hadn’t been offered that opportunity.

After their spring season ended abruptly in March due to the COVID-19 pandemic, Cuchran and Wilkey took full advantage of the chance to play again. Both made the FGCL All-Star team and were among the league leaders in several categories. Cuchran led the league with an on base-plus-slugging of 1.554, and came in second in RBIs with 25 and third in batting average at .450.

Cuchran has always hit for a high average — she hit .320 in her only full collegiate season in 2019. But after hitting 61 home runs in high school, she has hit just six in a year and a half for the Cats. Cuchran made an effort to work on her power over the summer, and it paid off. She hit eight home runs in 23 games in Florida, slugging a league-best 1.000.

“From my freshman year onward, I knew my average was where I wanted it to be,” Cuchran said. “But my power numbers, I definitely wanted to get up. I felt so comfortable this summer. Having teammates that really supported me helps me feel more comfortable in the box and work on my power as well.”

Wilkey started eight games and pitched in relief five times, compiling a 7-5 record and a 2.35 ERA. Her 76 strikeouts were third-most in the league. She was also a force at the plate, hitting .377 with 16 RBIs.

Wilkey’s best pitch is her rise ball, but over the summer, she focused on developing her secondary pitches, like her changeup and drop curve.

“I used (my changeup) a lot, and at the end of the season I used my drop curve a lot,” Wilkey said. “I really felt that all summer, I could go up against anybody.”

The Squeeze went 15-5 in the regular season, finishing in second place. They won their first two playoff games by a combined 24-1, then rallied from an eight-run deficit in the championship game to tie it up before ultimately losing 10-9 to the top-seeded Myacca City RiverMocs.

As FGCL All-Stars, Cuchran and Wilkey traveled to Melbourne, Florida after the season to play three exhibition games against the USSSA Pride, a top professional team. Wilkey more than held her own against some of the world’s best, giving up three hits in four scoreless innings.

“When Kenna’s changeup was on, it was filthy,” Squeeze coach Mario Hernandez said. “She was making hitters look foolish. There’s not a lot of college pitchers who can do that right now at this level.”

Wilkey enjoyed the experience so much that she has agreed to return to the Squeeze for the 2021 season, before her extra year of eligibility that the NCAA offered all spring-sport athletes due to the pandemic.

Drohan said she was thrilled and supportive when Cuchran and Wilkey showed interest in the FGCL, and she and NU’s other coaches were in contact with them consistently throughout the summer.

“As often as I could, I tried to watch,” Drohan said. “It was fun, and they were just loving playing the game again. Especially without school, in more of a relaxed environment, I really found that it helped their confidence.”