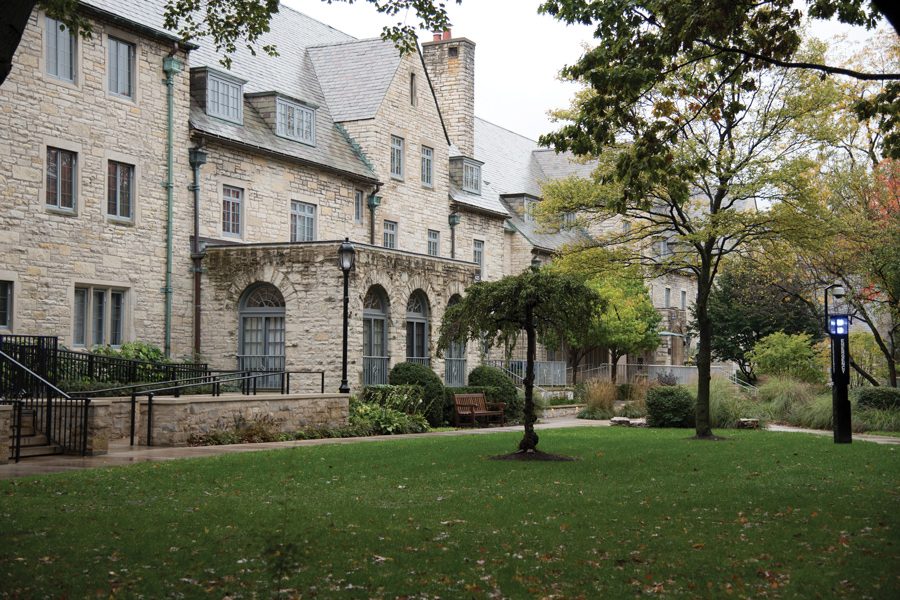 Northwestern’s sorority quad. The Panhellenic Association has called for the disbandment of Greek chapters on campus following calls for abolition this summer.

The statement was written in July and approved for release after a majority vote of PHA chapter delegates last week.

“PHA has failed its purpose of serving as an inclusive space meant to empower all women and non-binary people, and has continuously reaffirmed the patriarchy, binary gender roles, and heteronormativity,” the statement read.

The organization, PHA’s executive board wrote, has functioned as an oppressive institution that furthers exclusivity, classism, racism and homophobia in the community. The executive board added that all chapter houses sit on stolen land, and members reap the benefits of white supremacy and the prison-industrial complex.

“It is our firm belief that the harm done by PHA, regardless of intent, is irreparable and no amount of apologies or reform can lead to restorative justice,” the executive board wrote. “We acknowledge that this has come at a time where societal pressure for abolition has spread across campuses. Our movement towards disbanding is long overdue.”

Throughout the summer, the Abolish NU IFC/PHA Greek Life Instagram account has facilitated communitywide discussion on the harm that the institution inflicts on members of the NU community.

On Aug. 27, the NU chapter of Gamma Phi Beta was approved by its International Council to indefinitely suspend its charter following incident reports spurred by the Abolish Greek Life movement. Last week, the NU chapter of Chi Omega published an open letter to its national Supreme Governing Council calling for accountability after being prevented from voting on the chapter’s dissolution.

“Our obligation to our members’ wellbeings remains our utmost priority, particularly our BIPOC and non-binary members,” PHA wrote. “We are actively looking into disbanding in a way that won’t negatively impact our members, including students who have signed contracts and rely on Greek housing for its affordability relative to on-campus housing.”

The executive board added that the action to abolish chapters is ultimately determined by members of each individual chapter, and the degree of autonomy that their national organizations provide them in these decisions.

The executive board also wrote that it’s considering how decisions to disband amid the pandemic will affect kitchen and housing staff, as well as the Evans Scholars program who are employed by PHA organizations.

PHA will also stop charging chapters for dues that go toward recruitment, as those are the only dues that the organization has direct discretion over.

“When we say abolish Greek life, we have no intention of leaving a space that allows it to return,” the executive board wrote. “Therefore, we are looking into ways that would prevent national Greek chapters from coming to campus to ‘recolonize.’”

In order to avoid these organizations going “underground,” PHA urged NU in the statement to take action to protect its students by preventing such groups from forming and abolish current organizations that “systematically perpetuate harm.”

The executive board highlighted the need for the University to prioritize black students’ demands, because of the administration’s “consistent enablement of systems of oppressions on campus.” PHA’s statement pointed to the 52 years since the Bursar’s Office takeover, three months since NU Community Not Cops’ petition and how the University has yet to fulfill the demands of black students.

“Any organization that charges students for membership is classist and therefore, perpetuates systems of injustice and inequity,” PHA’s executive board wrote.

Given the resistance from national chapters, the University and alumni, PHA’s executive board acknowledged that the process to disbandment won’t be an easy or quick one. PHA added that it calls on all other Greek organizations, especially the Interfraternity Council, to consider disbanding.

While voting is typical for any statement PHA sends out, the organization told The Daily that many chapter leaders and delegates also faced pressure from those opposed to abolition to vote in a certain way.

“Several obstacles were thrown our way when attempting to release the statement, emphasizing the gravity of our words and the unprecedented nature of our statement, which was indicative of the resistance that individual chapters have and will face while and if they choose to work to disband,” PHA told The Daily.