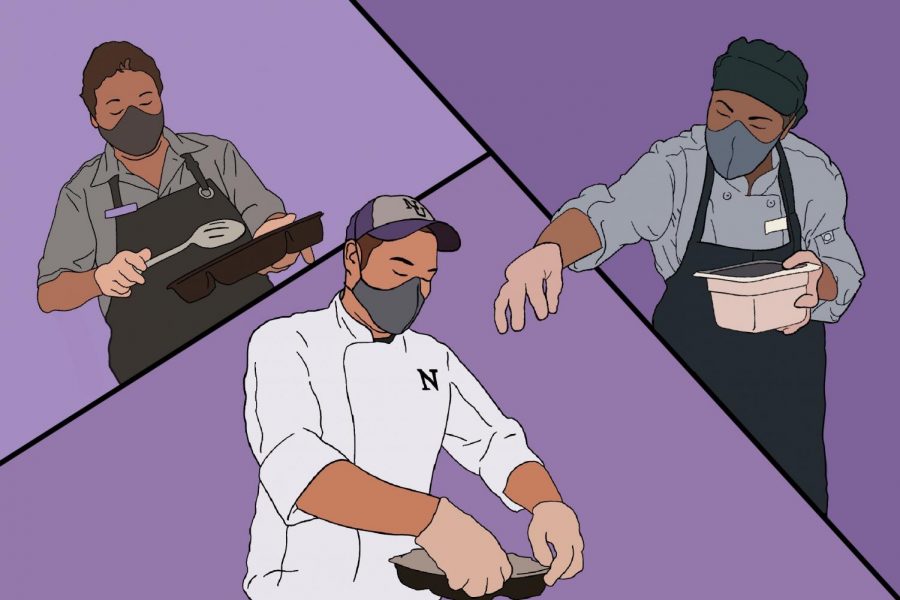 Northwestern dining workers. The vast majority of dining hall workers laid off at the beginning of the quarter are now being re-hired, per a press release.

Compass Group, Northwestern’s food service provider, had the opportunity to extend health and safety protections to its dining workers before the start of the academic year but chose not to. This month, NU dining workers are left to face mass layoffs and “unfair” attendance policies amid a pandemic.

Since March, hundreds of NU dining and hospitality workers have been laid off. While administrators announced plans to provide regular compensation and benefits to dining workers during Spring Quarter in partnership with Compass, these workers had not received any payment by June. Compass had agreed to a proposal in March to provide certain health and safety protections to workers, but those expired Aug. 31.

On Friday, the University announced that Compass plans to lay off about another 100 staff members who had been recalled from layoffs to return this fall. The layoffs, which will be permanent on Sept. 20, come after the University announced some dining hall closures this fall due to fewer students being brought on campus than originally anticipated.

“We regret that Compass must let go of workers who have been an important part of our campus community, and we look forward to a day when we can more fully staff our dining halls and retail outlets,” University spokesperson Jon Yates said.

Over the summer, UNITE HERE Local 1, the union representing subcontracted Compass dining and hospitality workers, had circulated a petition asking Compass to commit to an agreement about COVID-19 worker safety before the start of the academic year.

Noah Carson-Nelson, lead research analyst for the union, said as of Sept. 1, Compass is no longer paying for laid-off workers’ health insurance.

Just as some NU dining workers are returning to their jobs for the start of the academic year, Carson-Nelson said the loss of these protections mean workers may now be docked attendance points or face verbal disciplines for COVID-19 related absences.

“People are putting themselves and their families at risk to serve (the) campus and should be compensated for doing so,” Carson-Nelson said. “A hazard pay, or a COVID pay, is the bare minimum.”

If a worker were to come into contact with someone who tested positive for COVID-19 or is required to quarantine for two weeks by a medical professional or government authority, Carson-Nelson said quarantine pay would guarantee normal wages for those two weeks. Hazard pay is an increased wage for those working during this time, they said, because there are increased costs and risks associated with working during the pandemic.

Another protection that expired on Sept. 1 is a voluntary layoff, or the ability to not come back to work if a worker doesn’t feel safe and still maintains seniority.

Veronica Reyes, an employee in the Foster-Walker Complex C-store, has worked at NU for 10 years. On Friday morning, she said she still hadn’t heard from the Office of Human Resources whether the rumored — and later confirmed — dining staff layoffs would cost her job. As of Friday afternoon, she and many of her coworkers’ employment statuses were still unclear.

Since then, the University announced that Foster-Walker Complex’s dining halls will be closed for all of Fall Quarter.

“It’s very scary,” Reyes said. “My coworkers are very worried, especially (because) we don’t know if they’re going to take away our insurance.”

Ever since the government’s $600 unemployment checks ended and $1200 stimulus checks ran out, Reyes said it’s been very hard for her and her coworkers to keep up with rent, bills, groceries and mortgages. She said the confusing — and sometimes conflicting — messaging from Compass and NU about reopening this fall has left many uncertain about the future.

A lot of her coworkers, Reyes said, have relied on Compass to contribute to their health insurance payments in recent months, especially the elderly and those with conditions — like cancer or diabetes — that put them at higher risk of getting COVID-19.

“How can they do this during the pandemic to all of us?” Reyes said. “We have people working (since) the 70s, they’ve been loyal to Northwestern. And they’re doing this to them? All I want Northwestern to know is please tell Compass to support us with the insurance. That’s all we’re asking.”

Since March, Students Organizing for Labor Rights have raised emergency funds through mutual aid to furloughed and laid-off workers, as well as staff affected by the lack of health precautions in the workplace amid the pandemic.

As of last week, SOLR has raised over $80,000 distributed to over 200 workers in need who have either not received support from NU or can’t return to the “dangerous working environments” on campus. Medill sophomore Alex Harrison, a SOLR member, said the lack of communication from NU and Compass on which workers can return to their jobs and which will be let go has been a major problem.

“We are going through something that has not been experienced in 100 years — there is no better time to be dipping into (endowment) money than right now,” Harrison said.

With Northwestern’s near-$10 billion endowment, Harrison said the University’s explanations to not tap into it — including that some funds are illiquid and hard to access for short-term use — only run for so long. At some point, he said, people start to look at the endowment and ask what is the point of having that much money if not to spend it on a “basic emergency response” during a pandemic and recession.

Harrison said the University seems to frame the narrative around their finances as a zero-sum game, meaning if the administration is pushing for one thing, such as cutting tuition, then they have to take away from another — like laying off more staffers.

There is no reason, Harrison said, that these interests need to be competing against each other when the University is as wealthy as it is.

“If the purpose of your endowment is not to fund the University and its operations through a crisis like this, but the purpose is instead to just grow it indefinitely at all costs, you are not running a university, you are running a hedge fund — and that’s unacceptable,” Harrison said.

Weinberg junior Abbey Zhu, also a SOLR member, said the University is “fully capable” of tapping further into the endowment than the current 6 percent rate. However, she said the administration’s priorities lie in maintaining and hoarding their wealth rather than caring for workers and low-income students.

In May, University President Morton Schapiro said the idea that the University can take money from the endowment and use it for “whatever you want” is untrue.

One of SOLR’s demands from a Letter to the Editor published in July, Zhu said, was for administrators to cut their salaries to that of a full-time service worker, which is about $30,000 a year. They can do that and still live comfortably, she said, because of how much wealth they’ve accumulated in their roles over the years.

Clarification: This story has been updated to more accurately reflect dining workers’ discipline protections.
Correction: A previous version of this story generalized that NU dining workers will no longer receive health insurance contributions. It has been updated to reflect that this only applies to laid off workers. The story was also updated to change a word choice that was editorializing. The Daily regrets the errors.