Just before 6 p.m. on Friday evening, President Morton Schapiro sent an email to the school community announcing significant changes for the upcoming Fall Quarter. Most notably, first- and second-year undergraduate students will no longer be allowed on campus or in residence halls, and they will take all of their fall courses remotely.

Meanwhile, third- and fourth-year students will still be able to stay in dorms or off-campus residences with the exception of Greek housing. Those who had planned to live in fraternities or sororities will be forced to find some on- or off-campus solution.

While I fully support Northwestern’s decision to reduce the on-campus population in order to mitigate the risks of the COVID-19 pandemic, this email just offers more evidence that the Northwestern administration makes decisions according to the University’s financial interests rather than the mental and physical wellbeing of the students.

In an attempt to quell rising calls for reduced fees due to online learning and a lack of in-person activity offerings, the email announced a 10 percent decrease in undergraduate tuition. However, need-based financial aid will not change.

“Those who receive need-based aid will not be impacted, as their aid will be reduced commensurate to tuition, and their expected family contribution will remain the same,” Schapiro wrote in the Friday email.

The University recently told the Chicago Tribune that each student’s expected family contribution cannot change due to federal aid rules and regulations. However, while all higher learning institutions have faced this barrier to providing additional financial support during the pandemic, other universities have found various loopholes in the system to lower the costs associated with the upcoming academic year. For example, the Massachusetts Institute of Technology has offered a universal $5,000 grant to all undergraduates.

As a result, NU had a clear opportunity to offer a universal reduction in fees to all students, regardless of socioeconomic status. But inexplicably, this tuition reduction essentially acts as a discount for wealthy students who pay the full cost of attendance, while anyone on financial aid will continue to pay the same tuition that they would under normal circumstances.

Such clear preferential treatment for the upper class members of the NU community begs the question: What was University leadership thinking? Is the administration so out of touch with most students’ realities that they assumed we would not notice such blatant institutional inequality?

The timing of Schapiro’s email has also created chaos and confusion for students and their families. The announcement came just nine days before new students were scheduled to begin moving into on-campus residences in Evanston.

Other Chicago-area universities announced the closure of dorms several weeks earlier. Depaul moved to limit on-campus residences to only students with “exceptional circumstances” on August 12, and Loyola Chicago announced that it would not reopen dorms on August 6.

The University had more than enough time to change its reopening plans, so what was Schapiro waiting for? Students and their families are hard pressed to find any other reason for the delay other than the University holding out hope to save a few bucks on room and board charges.

On Tuesday morning, in response to widespread complaints about these issues, Schapiro released another statement to the student body regarding “additional changes and clarifications for fall quarter.”

However, he failed to remedy the University’s decision-making throughout the pandemic. The only adjustment announced in the email provides more flexibility for new students to defer this entire academic year on a quarterly basis.

Most disappointing, yet unsurprising, was that Schapiro doubled down on the 10 percent discount not applying universally to the expected family contribution for all students.

But this pandemic has disproportionately impacted low-income families across the country, and this decision on tuition costs from the Northwestern administration reveals a fundamental failure to recognize the current financial hardships of students receiving aid.

Ultimately, Northwestern’s poor handling of the pandemic and reopening efforts have only added to an already long list of institutional failures. In my time as a writer and editor for the student magazine, North by Northwestern, we published several features exposing the University’s underfunded and under-resourced mental health services.

In “Referral to nowhere”, Rachel Hawley reported on NU’s underfunded and understaffed Counseling and Psychological Services (CAPS) program. At the time the article was printed, Northwestern boasted just one counseling staff member for every 1,390 students on its Evanston campus, a worse ratio compared to every peer institution identified aside from Washington University in St. Louis. 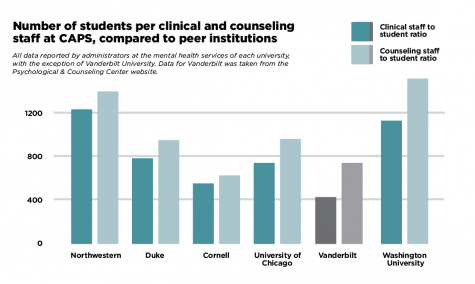 Photo courtesy of North by Northwestern

Over the past two years, the print magazine has also published features highlighting Northwestern’s confusing and often harmful medical leave policies, as well as the experiences of students facing severe mental health crises.

But despite our efforts as a magazine staff to uncover these unfortunate truths, the University has done nothing in the last few years to show greater care for the mental health and safety of its students. Time and time again, senior administrators have failed to offer sufficient investment in resources that could truly make the school a more supportive and hopeful place for hardworking young people.

Given this history of systemic issues and inequities at NU, it should come as no surprise to anyone that Schapiro and other university leaders have once again failed to live up to the high standards that the University demands of its own students. With an endowment of over $11 billion, NU has the resources to provide all the financial aid and mental health support that students deserve, but Northwestern continues to choose money instead.

Duncan Agnew is a Medill Fourth-year student. He can be contacted at [email protected]. If you would like to respond publicly to this op-ed, send a Letter to the Editor to [email protected]. The views expressed in this piece do not necessarily reflect the views of all staff members of The Daily Northwestern.