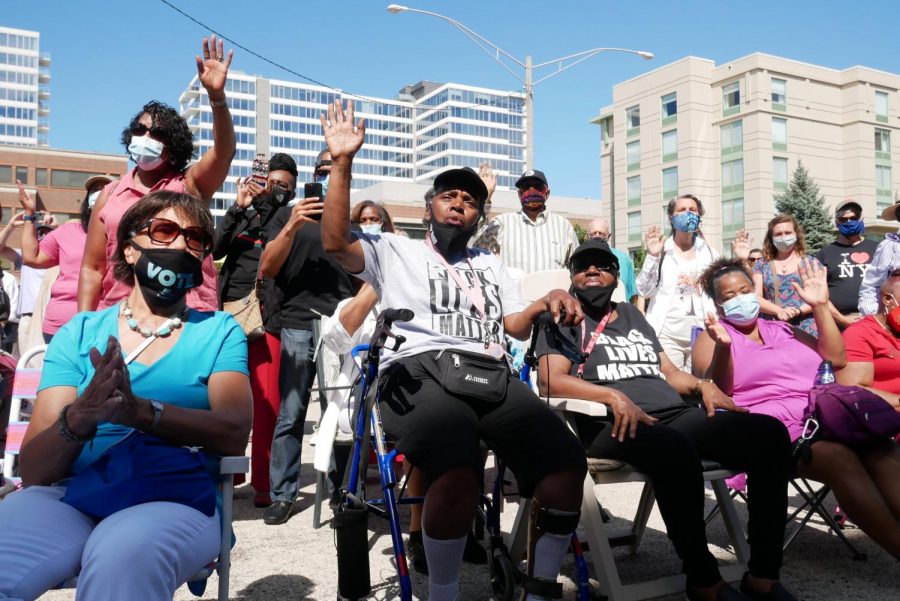 Residents join in during a solo at the service of lament for Jacob Blake on Sunday.

Roughly one hundred residents gathered downtown to hear from a cross-section of religious leaders and show solidarity with Blake, whom police from Kenosha, Wisconsin, shot seven times in the back. Blake attended middle and high school in Evanston; his shooting is the latest in the many cases of police violence that have received nationwide attention and spurred calls for reform.

“We’re here so that we might be able to give voice to our grief,” said the Rev. Deborah Scott of Ebenezer AME Church, who organized the event in coordination with the Second Baptist Church.

But Scott and her fellow faith leaders also gathered for reasons beyond consoling the community.

“It is good we are here,” Scott said. “Not only have we been called to grieve, called to lament, but we have also been called into action.”

Speakers encouraged residents to participate in civic action. Multiple speakers called for attendees to vote, with Elder James Thorn of St. James AME Church in Chicago telling residents to vote like it would be their last time. Scott and Thorn both invoked the elder Jacob Blake, Blake’s grandfather and a pastor at Ebenezer AME who helped lead the civil rights movement in Evanston.

Many of the faith leaders were similarly outspoken about the police. Rabbi Andrea London of the Beth Emet Synagogue compared police brutality to a cancer, adding it is “not one that can be cured by removing a few tumors.” She told residents the only way they could move forward was by holding police officers accountable.

Evanston Police Chief Demitrous Cook and Mayor Steve Hagerty were also among the speakers. Despite the pushback against police from other speakers — where Hagerty has largely backed Cook’s department amid calls for defunding — the two city officials also won applause.

Flanked by two uniformed officers, Cook embraced the calls for change, telling residents it was time for law enforcement to do better and emphasizing that police only gained their authority through their community’s support. He said EPD had tapped leaders from Northwestern’s Neighborhood and Network Initiative to reevaluate the department’s general orders and use of force policy.

The chief became emotional toward the end of his speech and took a long pause while audience members shouted support.

“It’s time to do better,” Cook said to cheers. “It’s time to get rid of the cops who don’t want to play ball our way.”

Hagerty was similarly conciliatory, acknowledging as a white person he lacked the perspective to understand the trauma inflicted on the black community. In closing his remarks, he took a cue from many of the previous speakers with an animated call for political action and support for Democratic candidates.

Despite the present pain, the speakers embraced hope more than anything else.

“At this moment we may be wounded, physically and emotionally. But we are survivors!” Senior Pastor Rosalind Henderson of Bethel AME Church told the crowd.

— Mayor holds Q&A on alternatives to policing in Evanston