Riker: With or without games, this fall will be the most important season in NCAA history 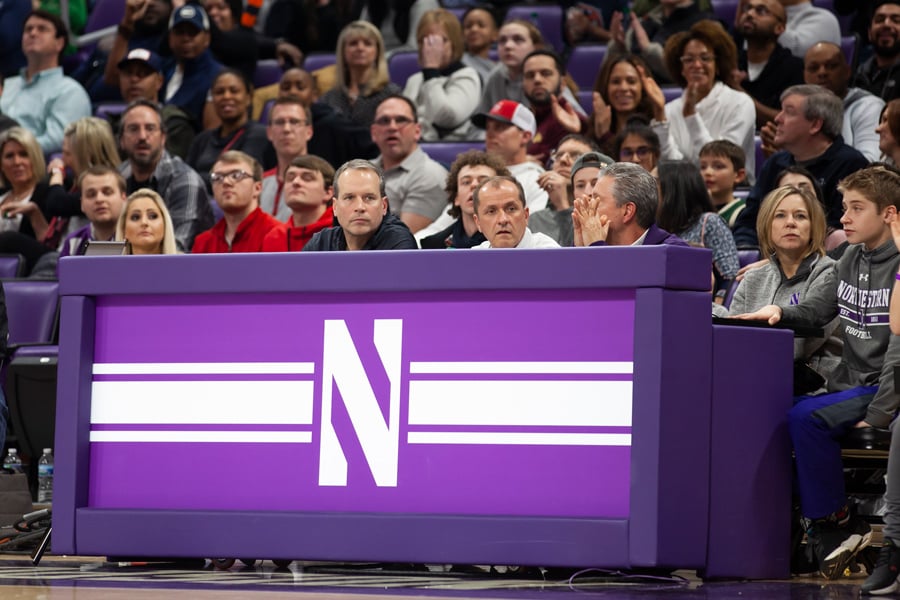 Chris Collins and Jim Phillips sit courtside at a game. The NCAA and its athletic programs face an uncertain future for collegiate sports.

A couple months from now, Ryan Field might be barren. The lakefront fields might fall quiet. Welsh-Ryan Arena might go dark. None of those bleak scenes are certainties, but the COVID-19 pandemic makes the scenario of a fall without sports a possibility.

That doesn’t change one glaring fact — there has never been a more important season of college sports than fall 2020. The truest glimpse of integrity comes in times of trial, and the coming weeks and months figure to provide the greatest litmus test of the character and structure of the NCAA and its schools.

Over the NCAA’s history, change has been incremental. The Ed O’Bannon likeness case affected schools’ abilities to monetize the likeness of student-athletes (and effectively sidelined the NCAA Football video game) and recent legislation from some states, including California and Florida, paves the way for student-athletes to profit off their likeness. While these changes are major developments in the world of revenue-producing college sports, the ripple effects of their decisions have yet to challenge the status quo. In 2014, Evanston was ground zero for the student-athlete unionization push, as former Wildcat quarterback Kain Colter led the charge, but the movement did not come to fruition.

The coronavirus pandemic is different. There is no skirting around the widespread implications it has on NCAA athletics.

Most directly, the presence of a global pandemic is forcing the NCAA and its programs to assess the role of student-athletes within its infrastructure. The question of whether the NCAA should pay its student-athletes has long been a subject of debate. Now, with athletic departments facing massive financial losses at the prospect of the cancellation of fall sports, the conflict between revenue and player safety is unavoidable.

In June, University of Arizona cornerback Malik Hausman took to Twitter to ask why his team was practicing on campus — a fair point after the university president said his campus wouldn’t open if the state’s coronavirus spike persisted. Oklahoma State coach Mike Gundy made headlines in the spring after he pointed to the state’s economy as a reason for college football in the fall. Both statements offered thought-provoking takes on the NCAA’s current priorities, but the more telling indictment will come this fall with how the programs decide to act.

Still, the fate of football among Power 5 schools is rock-solid. Non-revenue sports? Not so much. With budget cuts imminent as a result of the pandemic, one of Northwestern’s peer institutions, Stanford, sent shockwaves through the sports world by dropping 11 of its teams. NU takes pride in its Olympic sports program and has backed it up with significant investments in training facilities. But if Stanford, the gold standard for non-revenue sports programs, is making cuts, how steady can the ground beneath NU’s teams really be?

As the governing body of college sports, the NCAA also must decide how it sees its own authority. Most of the decisions so far have been at the discretion of the schools, including testing protocols. The conferences themselves have made other key decisions, with the Big Ten’s decision to forego all out-of-conference games emerging as one of the major dominos to fall this summer. The NCAA, on the other hand, has provided guidelines instead of dictating specifics, a laissez-faire approach that may be practical for the offseason but may prove untenable once the action starts.

While there’s no guarantee that we will have the excitement of game days on Saturday, this fall poses an abundance of questions that promise a captivating look into college sports and its future. The unfortunate reality presented by coronavirus will test and reveal the priorities of the NCAA and its programs more than any time in the past. It’s not hyperbole to say that college sports will never be exactly the same after this fall.

This is neither to condemn nor condone the NCAA and its programs, because at this point, the crucial chapters of this saga have yet to be written. But the institution of college sports needs to realize the golden, if unsolicited, opportunity ahead — an opportunity to prove its loyalty to its student-athletes and find a winning compromise between money and security.

John Riker is a Medill sophomore. He can be contacted at [email protected] If you would like to respond publicly to this op-ed, send a Letter to the Editor to [email protected] The views expressed in this piece do not necessarily reflect the views of all staff members of The Daily Northwestern.