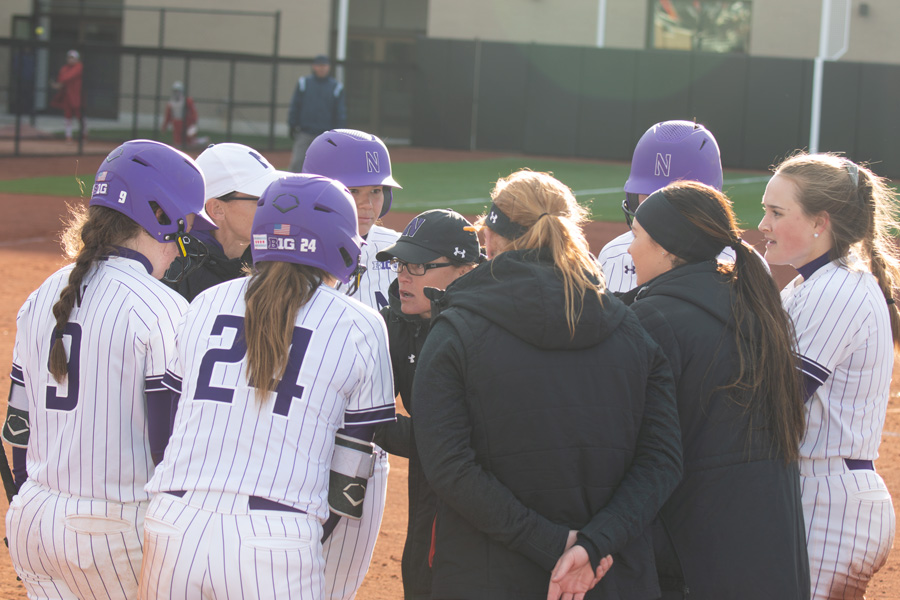 The Wildcats gather in a huddle as they prepare to bat. NU will rely on a veteran core as it looks to return to the top of the Big Ten in 2021.

After a historic 2019 season that saw Northwestern post a 20-game winning streak, go 21-2 in Big Ten play and reach its first NCAA Super Regional in 11 years, the Wildcats entered 2020 with high expectations.

NU struggled against a loaded nonconference schedule, losing close games to the likes of Arizona State, Virginia Tech, Florida and Washington. The Cats still figured to be contenders in the Big Ten, but the COVID-19 pandemic cost them their chance to find out.

The 23 games NU did play in 2020 gave a young team a look at some of the best in the country, and that experience can only help as the team looks ahead to 2021. The Cats’ biggest name is junior pitcher Danielle Williams, the 2019 NFCA National Freshman of the Year, but NU will return nearly its entire roster.

The Cats will have a deep pitching staff, led by Williams, senior Kenna Wilkey and sophomore Sydney Supple. They’ll be strong up the middle with junior Jordyn Rudd behind the plate, junior Maeve Nelson at shortstop, senior Rachel Lewis at second base and junior Skyler Shellmyer in center field.

Lewis, Nelson, Rudd and junior Nikki Cuchran should lead the offense. Nelson hit a team-best seven home runs last season, and Rudd followed up a 51-RBI freshman campaign with 22 in her shortened sophomore year. Lewis is NU’s best all-around player, with her combination of power and speed. Senior Morgan Newport, returning for her extra year of eligibility, should also be a key contributor.

With a veteran group led by one of the most respected minds in softball in 20th-year coach Kate Drohan, NU should be an exciting team to watch again in 2021.