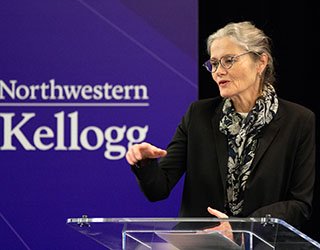 Kathleen Hagerty, who has served as Northwestern’s interim provost since April 1, has been named the University’s new provost, effective Sept. 1.

Hagerty stepped into the interim role after former provost Jonathan Holloway left upon his appointment as president of Rutgers University. Serving as interim provost entirely during the pandemic, she has been an integral part of the University’s COVID-19 response and return to campus plan.

She will also serve as the University’s first female provost.

“This is a pivotal moment in Northwestern’s history, and it is clear to me as we look ahead, that Kathleen is the right person to lead our academic enterprise and build further on our 169 years of academic excellence,” University President Morton Schapiro wrote.

Despite the administration’s praise, Hagerty has clashed with student demands for racial justice in the last few months. In May, The Graduate School students hosted a town hall with Hagerty to address and advocate for prioritizing the University’s diversity and inclusion efforts. When asked if she had educated herself during her tenure as interim provost on issues like racism, colonization, disability, Indigenous rights and more, she said she had not done so, drawing criticism from students.

In a July meeting with undergraduates, Hagerty said that she is open to reevaluating the role of University Police in certain areas, an organization that many students are pushing to defund and disband completely.

Hagerty has previously served multiple senior leadership positions in the University, including associate provost for faculty and interim dean of the Kellogg School of Management. She joined Kellogg over 30 years ago and holds the First Chicago Professorship in Finance.

Within Kellogg, Hagerty has served two terms as senior associate dean of faculty and research, two terms as chair of the finance department and two years as the faculty director of the school’s Ph.D. programs.

“Having worked closely with Kathleen amid some of the most challenging conditions the University has ever faced, I am continuously impressed by her intuition, decisiveness, dedication to our institution and her compassion for our community,” Schapiro wrote.